Right off the bat, if you’re not an Android user and don’t have enough patience to use a VPN through an emulator, it’s probably time to rule this VPN out.

Their website is a bit shocking to see at first because it’s simply missing numerous details a VPN website should have… we can already expect the level of service and the quality of the VPN from the website alone.

But let’s not jump to conclusions just yet. Let’s jump to the review right away.

Pricing & Plans: Become a VIP for a dollar

ZeroVPN is known as a free VPN. However, they do sneakily offer an in-app purchase that goes by the name of VIP. 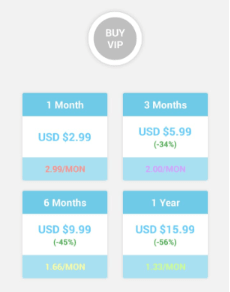 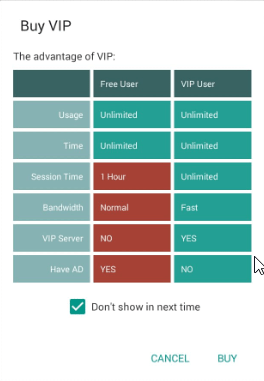 There are four options for the VIP plan. The pricing is super cheap, which is only reasonable as this is an Android-only service.

For $2.99/month, you get no ads and unlimited sessions and bandwidth. Bulk pricing options include 3 months, 6 months, and 1 year. The last plan gives you this VPN for a mere $1.33/month! Think of it this way: the monthly subscription of Zero VPN is at a price level that you unlock by signing up to NordVPN for 3 years.

Product Interface: Clean, simple and good use of colors

Zero VPN’s software has a clean look, and we like the map showing all active servers with icons that change color to indicate server availability. 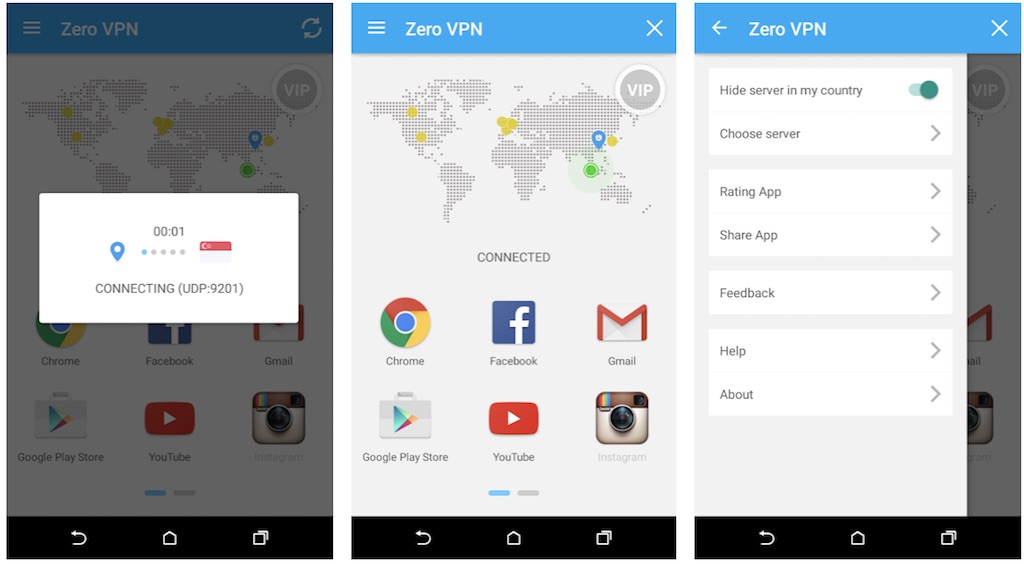 Zero VPN requires their users to provide personal information like email addresses in order to establish accounts, verify payments, and respond to any inquiries.

They claim to only store this on their servers and say that your information is not shared with other institutions.

However, their Privacy Policy states that they do send diagnostic data to third party analytics providers to maintain their network and address bugs in their application. They add that this data does not contain any personally identifiable information.

“Zero VPN does not collect, log, store, share any identifiable personal information of Users. Zero VPN may collect the times when connected to our Service and the total amount of data transferred per day. Zero VPN stores this to be able to deliver the best possible network experience to you.”

Zero VPN claims that they don’t log any other significant user data.

OpenVPN is a highly coveted protocol in the community. It’s secure encryption of the military-grade.

So when we saw that Zero VPN relies primarily on the OpenVPN protocol, we were pretty happy. Obviously, there’s no flexibility for much else. But it does win a few points.

Server and Locations: You can count them with your fingers

The free service of Zero VPN has 8 server locations across Europe, Asia, and North America.

The premium plan gives you access to their “VIP servers,” but we’re not really sure what the difference is, to be honest. The servers seem to be the same. 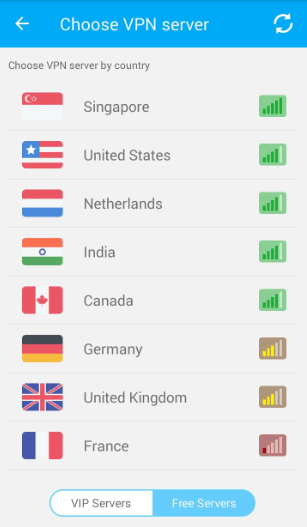 This is decent in terms of coverage, but nowhere near the number of servers offered by other VPN services.

Now, as for server reliability, we checked their servers and were initially met with notifications of connection errors.  They explained that this could be because of weak network signals or user ISP blocking the connection.

After a couple of tries, we managed to get them to work. But it required more patience than we would’ve liked.

Netflix Test: No way this can work, barring a miracle

The definition of wishful thinking is when you expect a free VPN service to unblock Netflix.

That is to say, Zero VPN is useless for accessing Netflix on their servers. Nor should you expect them to get on this issue any time soon.

Torrenting Policy: Technically, yes, but do you really want to?

Zero VPN claims to encrypt all types of network traffic, which presumably includes P2P traffic. But do you really want to risk torrenting on a free VPN service like this?

It’s worth paying a few bucks more to guarantee a safe experience as these torrenting VPNs would provide.

The U.S. server we tested yielded dismal results, carving off nearly 70% from our control speed of 96 Mbps.

They do not have any money-back guarantees. We tried looking for any policies on getting a refund, but their FAQ was of no use.

Be aware that if you decide to pay to use Zero VPN, you won’t get your money back.

Zero VPN gives you credit and debit card options. You can also pay through your telecommunication service provider, if applicable. 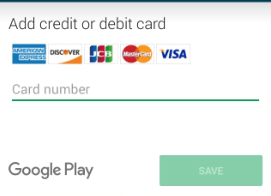 Zero VPN is specifically developed for Android. We have no idea if they plan to introduce other platforms at this time (unlikely). But Zero VPN did not make our list of the best VPNs for Android either…

If you really want to use Zero VPN on your desktop, you’ll have to get an emulator. We’re sorry we’re even mentioning this because there’s absolutely no reason why you’d want to do this.

Better just get another VPN that works for your computer – there are plenty of other free options out there. Here are the best free VPNs.

Sign-Up Process: Look, they want to see our photos!

When you try to install Zero VPN on the Google Play Store, you’ll see this:

That’s a whole lot of things it needs access to. Now, why does it need access to our photos, media, and files? And what’s with the device history? What about call information?

We know this will stop the more privacy-conscious among you, and we feel the same.

Apart from this huge red flag, downloading is a breeze.

Product Documentation: 0 (that’s a zero in case you were wondering)

Again, this is something we don’t think Zen VPN will improve on.

Customer Support: Do you like emails? Then go for it

To say that Zero VPN doesn’t seem to place that much of a focus on customer service would be an understatement. Forget about live chat.

There’s a minimalistic help section with 4 articles about setting up the VPN. 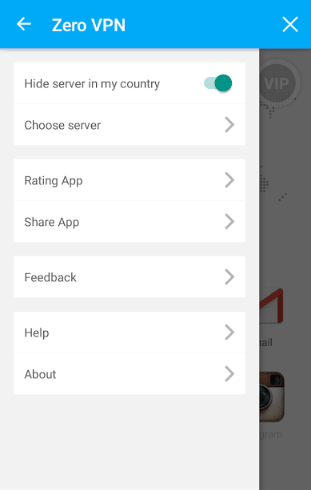 If you’d like to provide any feedback, there’s a tab for it. Support tickets go to [email protected]

When we did our IP leak test, everything seemed dandy.

But we proceeded to check out our DNS leak test results and this is what we saw:

It revealed multiple server locations in different places. What is going on? Perhaps it’s a P2P VPN like Hola VPN?

Talk about killing the vibe. This VPN does not come with a kill switch.

This is an area for improvement. Adding a kill switch would be an advantageous step for Zero VPN if they want to evolve as a product.

Wouldn’t you want this fail-safe measure to protect you from a possible disconnection? We certainly do.

Zero VPN as a Business

This VPN has a whopping 1,000,000 installs on Google Play. Since 2015, they have been trusted by users to secure data privacy. They don’t seem to be updating the business page or the apps, which isn’t a good sign.

This will give users an extra blanket of safety. Authorities simply just can’t ask for user activity from Zero VPN since Hong Kong isn’t a part of the mass surveillance organization.

If you’re looking for a quick Android app that gives you an unsecure VPN with some headaches… we still wouldn’t recommend it. They do have a decent rating on the Google Play Store, so that’s a plus.

But if you’re looking for a quality VPN that will secure your privacy online, go somewhere else. You’ll find their server unreliability a bit too much of a con. There have also been reports of the VPN stopping the connection when your device is in sleep mode.

The lack of customer support, product documentation, and even the low number of servers clearly indicate that this product has a long way to go. To match similar services in the market, they need to clean these up. Until then, we recommend you look at these best VPN services.