Launching in the latter-half of 2012, Hola VPN was launched by Hola Networks Ltd, a company based in Israel.

They claim to have served over 195 million people around the world (up from 160 since we first wrote this review), and while this may be the case, quantity does not indicate quality as you’ll quickly come to discover in this review.

We say that Hola VPN is not a “typical” one because they are a peer-to-peer VPN; instead of using fixed servers dotted around the world, Hola VPN tunnels people through other users’ connections.

The theory of a peer-to-peer network on paper is good – everyone is connected so you cannot have everyone liable for anything. This is odd, particularly for a VPN company, but is it a good one?

VPN Speed and Performance: It’s one good thing at least.

We tested two of Hola VPN’s connections, one in the U.S. and one in Europe. Normally, we would connect to a server and perform a test, but because of the way Hola works we could not do this.

At the time of writing this review, our download speeds were averaging at around 200Mbps when not connected to a VPN.

When we connected to their US network, our download and upload speeds were virtually unaffected and were as follows:

And it was the same story when connected to their European network from a computer in the EU.

In terms of speed, Hola VPN performs very well and there is virtually no negative impact. That’s very rare to see and we are pleased to report this.

Hola VPN talks highly about being a free service, but there’s a huge catch—free users form part of the peer-to-peer network while “PLUS” users don’t. This means that as a free user, other users of the Hola network, even Plus users, will be connecting through your hardware.

The Hola VPN Plus plan can look cheap, though.

VPNs nowadays have varying offers like this – from monthly subscription to extended plans. Hola VPN’s cheapest and longest plan costs $107.55 for 3 years, or $2.99 per month on average.

Hola VPN offers a 30-day money back guarantee, which is nice to see.

Another positive was that Hola installed seamlessly in seconds and was immediately available for use. It was added to Google Chrome as an extension and it took around one minute for it to download, install and work.

We like speedy service, so nice job here, Hola! 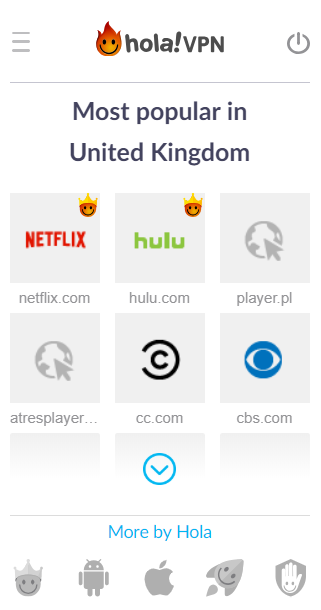 Hola opens up as a drop-down app that shows you the most popular sites on the network that you are connected to.

You can also sign up with your social accounts (which we don’t recommend) when you sign up for a PLUS subscription.

The only thing Hola has in terms of help is a FAQs page. It offers a solid content list and manages to cover most issues or questions the general user might have. If it doesn’t? Well, good luck getting a response from their support!

Hola VPN, as mentioned above, is not your typical VPN service and you cannot connect to specific servers or locations like you can on others. Instead, Hola VPN routes your connection through other people using the free Hola VPN service.

So yeah – your connection and server availability depend on other people using Hola, and their connection quality.

One of the main reasons for VPN usage is to access geo-restricted Netflix content, and while Netflix and VPNs don’t tend to work well together, some VPN providers do have servers that work with Netflix.

That’s not the case for Hola VPN.

We tested several of their connections and all of them were blocked by Netflix despite them having a special “Netflix button.” Disappointing to say the least.

Not even close to these others VPNs that unblock Netflix with no problem!

These VPNs are all vouched for and support P2P activities.

Your options are to pay via credit card or PayPal, that’s it. No Bitcoin. No cheque. No cash. C’mon Hola, throw us a bone here!

They’ve added other options like Alipay but still no anonymous payment methods. (Look into Monero, Hola!)

Device Compatibility: It can only be used on limited devices

Although Hola VPN’s site claims that you can use their service on multiple devices, whenever you want and wherever you are, this is not 100% true. 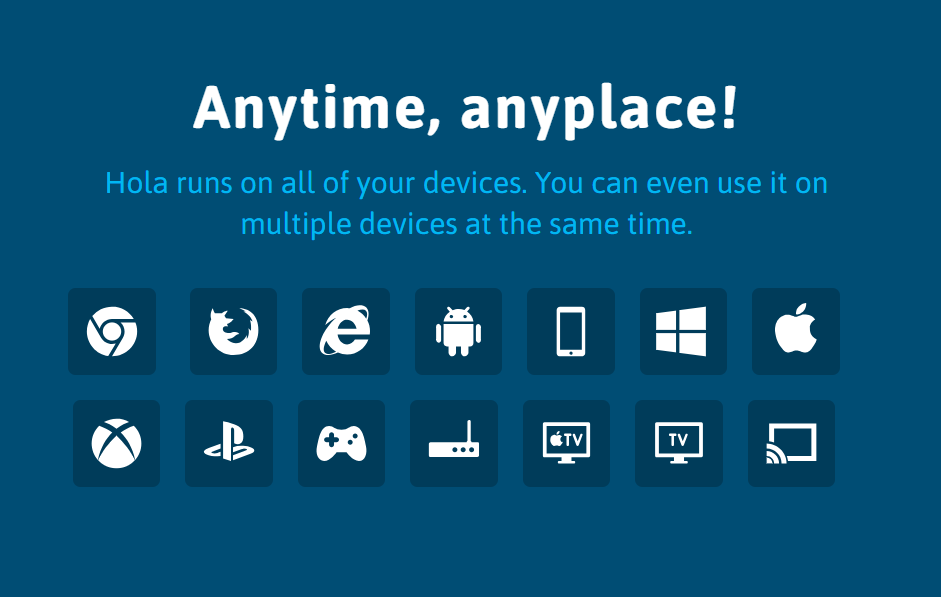 While this looks good, each button is a link. Look what happens when we click on the PlayStation link:

That’s pretty deceptive, Hola VPN. Their service doesn’t work on the majority of the services they list. This is disappointing given that many people are now using VPNs across many, if not all of their devices.

To get assistance, you must send them an email from your mail client. There’s no live chat, no social media support and no contact us form.

At the time of writing this, an email sent four days ago has still not gotten a response.

Wow. From the above information, we can see that they are logging everything about your activity on the internet: the browser you’re using, the web pages you’re looking at and the amount of time spent on them. What’s the point of this VPN at this point?

They also log all your personal information including your IP address and they are at liberty to share it with their so-called “subsidiaries and affiliated companies.”

Not good at all. In fact, scrap that. It’s less than bad – it’s awful. In fact, we won’t blame you if you stop reading right here; at this point, the purpose of this VPN is questionable, and it gets worse as we go further in.

Just take a look at what the Hola app has access to. This is the full list of permissions required by the Hola Free VPN Proxy app:

Just ridiculous. Why does a VPN require all this information? Why do they need to read or modify the contents of your USB storage? Why does it need to read your contacts?

IP and DNS Leak Test: You’re gonna have to mend those holes…

Even for the best VPN, a leak can be fatal. Whether it’s a DNS leak or WebRTC leak, the end result is the same—your privacy and anonymity are put at risk. They uncover your original IP address and the game is over.

We run tests on every VPN we review to uncover leaks. We’ve detected leaks. This, again, is not good at all – shockingly bad, in fact.

Our IP was not leaked, at least from https://ipleak.net/. However, https://www.dnsleaktest.com/ detected a whole lot of DNS leaks.

Premium VPNs like ExpressVPN have complete leak protection. No one will know what you’re doing. With Hola, it seems you will be an open target.

Encryption and Protocols: None

The industry standard when it comes to VPNs is OpenVPN and AES-256 as they provide a safe and secure experience. Hola VPN is not a typical VPN, though, and is a peer-to-peer VPN network.

While Hola VPN claims that this peer-to-peer connection is secure and anonymous, it’s not. You are connecting to some else’s computer.

This doesn’t even come close to secure.

Another aspect that makes us feel uneasy about Hola VPN is its lack of kill switch.

So, that’s no kill switch to add to the list of problems Hola has.

Hola VPN as a Business

Hola was founded in 2007 by Ofer Vilenski and Derry Shribman. They have 150+ employees and their investors include DFJ, Trilogy, Horizon Ventures, and Orange.

Hola is based out of Israel, which is an unofficial member of the Five Eyes global surveillance Alliance.

This means there’s a risk your personal data will be collected by governments. Judging from their logging policy, nothing you do with Hola is safe from prying eyes.

Hola VPN Conclusion: We don’t even know where to start

It’s not good news… where do we even begin?

Let’s start with the few positives; it’s fast, really really fast (at least in our tests). And that’s where it ends.

Negatives? No actual servers, logging all over the place, no encryption, no torrenting support, no Netflix bypass, few payment methods, lack of device support, and so on. There’s not even a kill-switch. Oh, and don’t forget we’ve been waiting for 4 days for a support response.

Sure it’s easy to use. But it practically doesn’t do anything you want it to do!

If you are looking for a VPN that provides anything close to privacy or for entertainment, avoid HolaVPN. Just avoid it. Look elsewhere!

Buy because:
+ Easy to use
+ Fast Speeds

Things to consider:
- Lots of logging
- No encryption
- No access to Netflix or torrenting
- No customer support
- Leaks detected
- It basically doesn't do the job