Linux users aren’t like your typical Windows or MacOS users; they tend to be more tech-savvy and computer literate. As an operating system, Linux doesn’t use pretty GUIs such as start buttons and menus, instead focusing on functionality and control. This means it’s primarily used through command lines.

In general, Linux is a brilliant option for privacy. It is an open-source operating system that is wholly transparent and there are even specific Linux distributions for people who are particularly privacy-conscious.

Still, even the most secure operating system will benefit from having a VPN installed. Using the best VPN for Linux adds an extra layer of security to help keep you secure and private. Not to mention the additional benefits such as unblocking video content on streaming services and getting around government-backed censorship.

Choosing the Best VPN for Linux

Choosing a VPN for Linux isn’t the same as choosing one for Windows or MacOS.

This is primarily because of the way Linux works—remember, it sacrifices GUIs and other “intuitive” niceties in exchange for performance and control—installing a VPN is a case of choosing download installers from VPN sites or using the apt-get command.

Not all VPN providers offer this. Unfortunately, you can’t just go ahead and install a Windows VPN on a Linux operating system—it won’t work. Despite this, there is still plenty of choice for Linux users who want a robust VPN service.

Because Linux users tend to be quite tech-savvy and choose control, usability, and functionality over form and aesthetics, many don’t bother using a proper VPN service and will instead opt to use tools like OpenVPN, AnyConnect, and NetworkManager to protect themselves.

That being said, an even better option is to find a provider that makes a native plug-and-play VPN client especially for Linux. Why? Because there’s less need for configuration and they come packed with a lot more features such as several locations, server hopping, and torrenting support.

What Makes a VPN One of the Best?

No one VPN is the same; each one has its own merits and demerits. However, the best VPNs tend to share some of the same traits. What makes a VPN ‘good’ or ‘the best’ is open for debate, but it’s widely accepted that the best VPNs…

These are the features that most people look for in a VPN. If a service can do all of this and more – and do it well – they will rank highly as one of the best in the market.

Our Picks: The 5 Best VPNs for Linux

As we write this, these are the very best VPNs currently available for the Linux operating system.

1. ExpressVPN: The best VPN all-around (yes, even on Linux!)

Yes, we know. ExpressVPN wins again. We love their service here at GoBestVPN, even when using Linux. It’s not just about the extremely fast 24/7 live chat support or the guaranteed Netflix…

ExpressVPN doesn’t have a desktop GUI,  but you’re probably used to it as a power user. A lack of a GUI doesn’t mean it’s bad. Setting up ExpressVPN on Linux is easy, and it’s managed through a command line.

Of course, this option doesn’t suit the two Linux users in the world who don’t want to mess around with command lines. 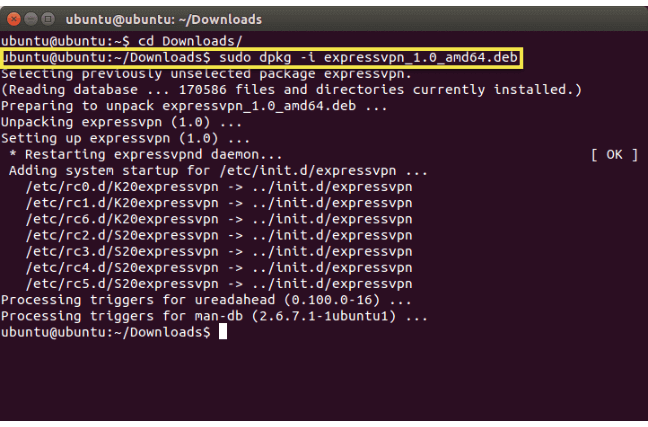 Users of Linux shouldn’t have any trouble with this since this kind of action is almost native them. If you need a helping hand, there are plenty of resources available online.

ExpressVPN supports Ubuntu, Debian, Fedora, and CentOS, both 32-bit and 64-bit versions. For users of other Linux distributions, you can manually configure OpenVPN using their setup tutorials that can be found on the ExpressVPN website.

Want to use a router? ExpressVPN supports routers via DD-WRT support.

This means that you can protect your Linux device as well as every other device that uses your network without having to install ExpressVPN on every device. 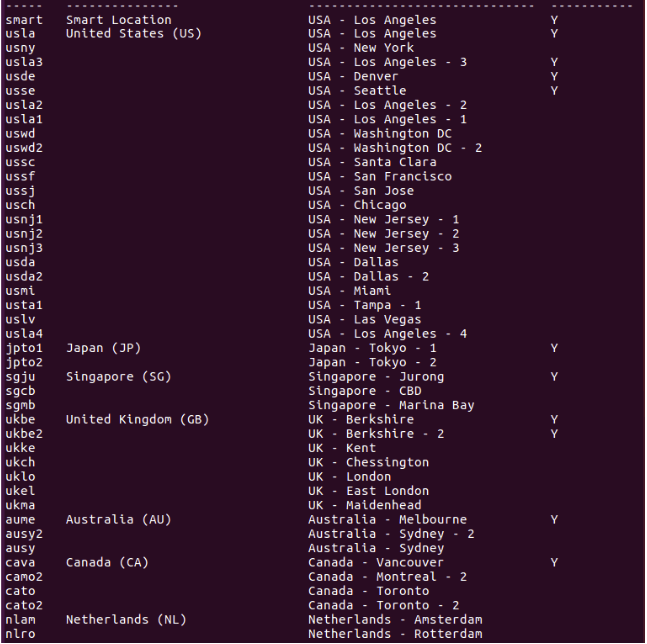 As for the quality of the service, ExpressVPN offers well over 2,000 servers that are located in almost 150 places around the world. When we tested out ExpressVPN, we found that their servers were consistently fast and worked with streaming services such as Netflix.

P2P support is available and ExpressVPN fully supports your privacy; it uses strong encryption, OpenVPN, and don’t log anything. Best of all, they’re located in the British Virgin Islands, which falls outside the 5, 7, and 14-Eyes agreements.

That’s not even the best price, though…

We’ve found an even better deal – you get 15 months for the price of 12 along with a 30-day money-back guarantee that lets you try out ExpressVPN risk-free.

If privacy is your major concern, then you should check out Mullvad. The service is unlike most other VPNs in that it doesn’t operate on a typical accounts-based system.

When you sign up on Mullvad, you’re given an account number. It’s not tied to your email address or other personal information.

(*It’s important to keep this account number safe as it cannot be recovered.)

When you sign up for a subscription, you can use cash, check, and of course, cryptocurrency for further protection of your identity. Regular payment methods are also available.

Mullvad states they don’t keep logs. If you trust their word, it means you can remain anonymous. 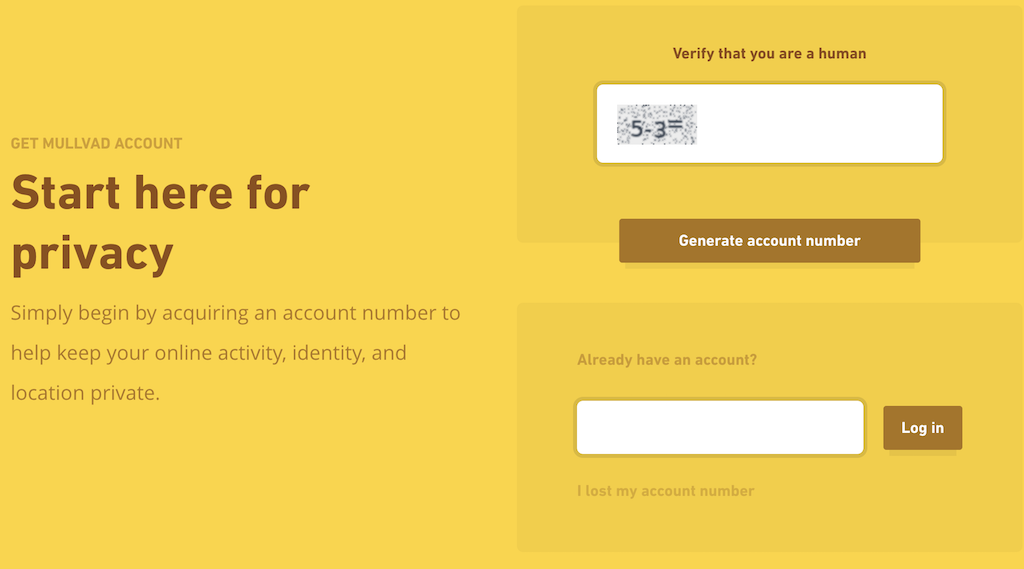 Mullvad offers an open-source client for Debian and Ubuntu. These clients come with an intuitive and comprehensive GUI. For other distributions, however, you will have to install Mullvad and use it through the command line.

Again, their website has plenty of resources that can help you out with Linux installation.

As far as performance is concerned, our comprehensive testing of the Mullvad service impressed us—we didn’t experience a significant drop in speeds and some of their servers worked with Netflix. But not all of them. This makes Mullvad a decent choice for streaming and torrenting, but it’s not perfect.

Mullvad’s pricing is straightforward enough—the service costs 5 euros per month (around $6). They don’t offer any bulk discounts. However, there is a free trial that lasts for a few hours, plus a 30-day money-back guarantee. No refunds for cash payments, though.

But some things to note: their customer support is severely lacking and they’re based in Sweden (part of Nine Eyes Alliance).

3. NordVPN: A newcomer to Linux that doesn’t disappoint

NordVPN finally launched native support for Linux in August 2018 in the form of a dedicated app.

It’s quite simple to set up NordVPN on Linux through the command line. The Linux app comes with all the same features you get with other operating systems such as a kill switch and an optional advertisement blocker (which none of Linux users will use). 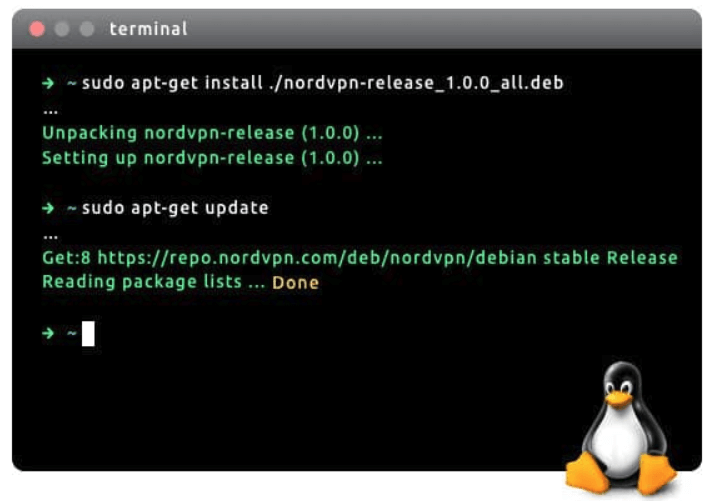 But if you prefer to do things the old-fashioned way, NordVPN can still be set up through manual configuration for OpenVPN, PPTP, and IKEv2 protocols. NordVPN’s website contains detailed guides on how to do this.

NordVPN is based in Panama, which means it falls outside the 5, 7, and 14-Eyes agreements. Its anti-logging policy will satisfy you if you’re concerned about your privacy and security.

It offers lots of specialized servers designed for specific activities such as P2P, streaming, and additional security. NordVPN protects every connection with 256-bit AES encryption alongside OpenVPN or IKEv2.

With thousands of servers in over 60 different countries, every major place in the world is covered by NordVPN. This makes the service suitable for a whole range of users around the world. Netflix works, torrenting and P2P is allowed, and the servers are consistently fast and perform well. 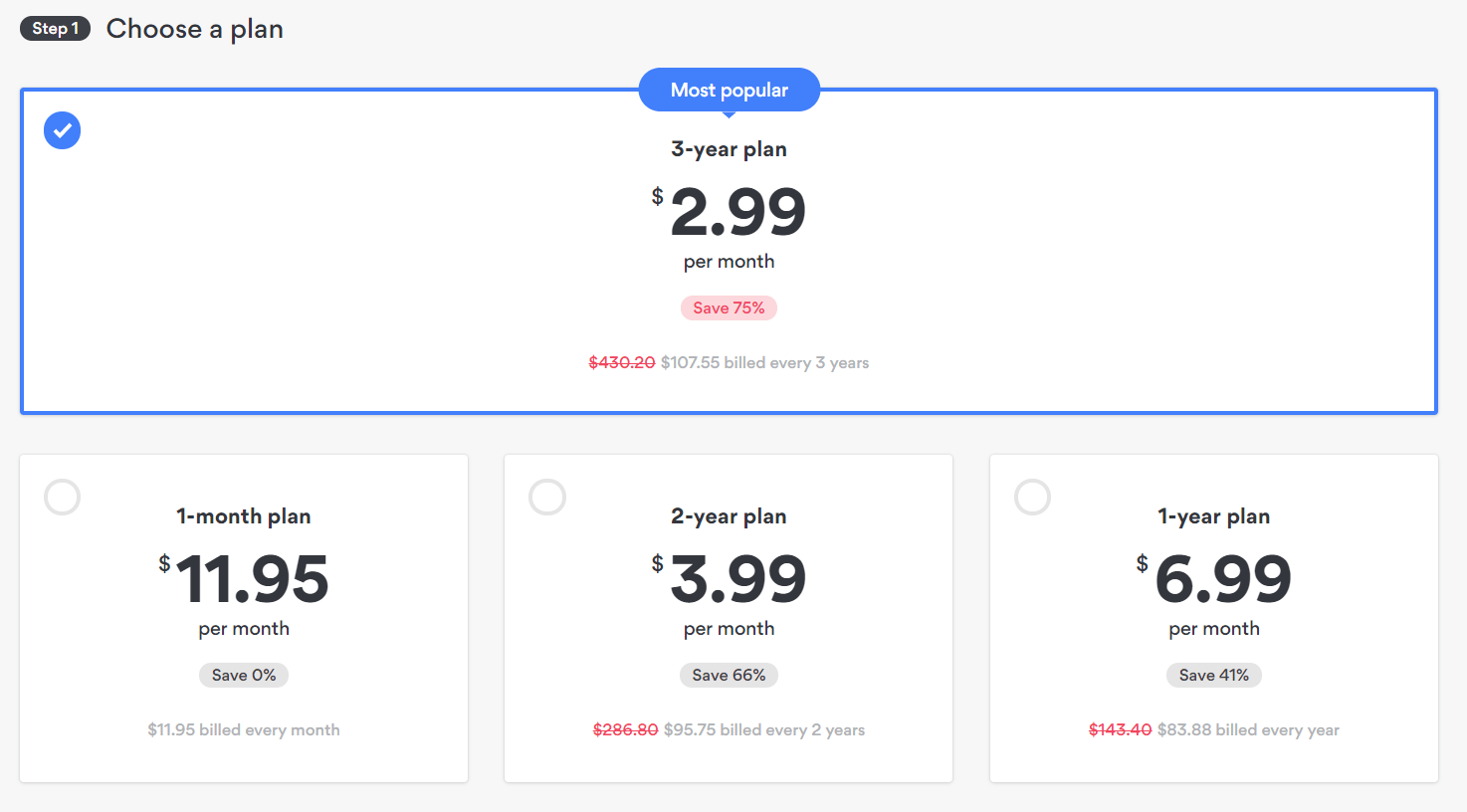 Pricing for NordVPN starts at $11.95 per month with a 30-day money-back guarantee.

4. HideMyAss: A Great VPN for Linux? 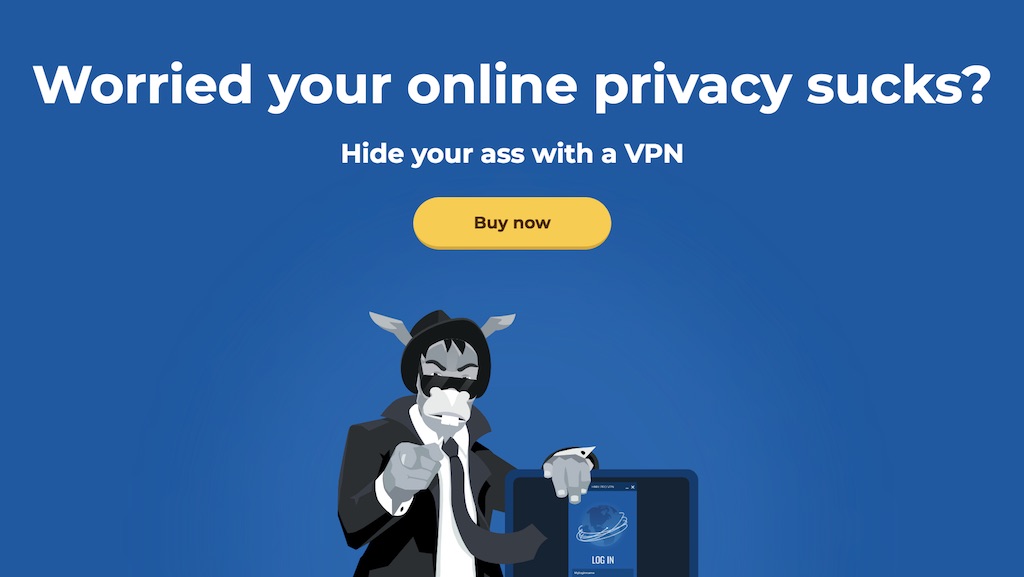 If you just started using Linux and want a Linux-friendly VPN that’s easy to get to grips with, HideMyAss may be right for you.

Although there are far fewer servers available, the number of locations outstrips both ExpressVPN and NordVPN. Their client is straightforward and doesn’t over-complicate things, which is perfect for beginners too.

There are several ways you can connect to the HideMyAss’ network on Linux. This includes their OpenVPN client. While the client itself is a simple and stripped-down version of their native Windows app, it still gets the job done and keeps things simple. 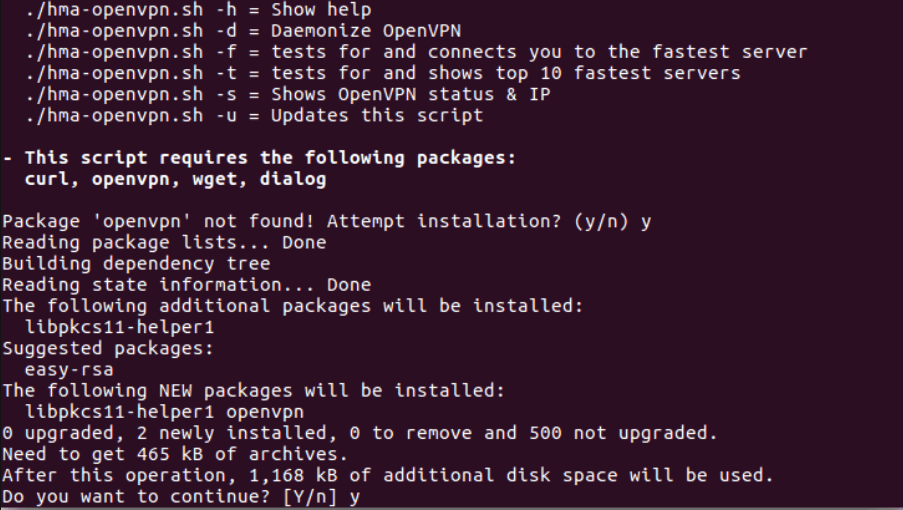 Need more help? The HideMyAss website has a dedicated section for Linux-related queries.

In our testing of HideMyAss, we found that our speeds were not throttled or limited, which makes it a great service for activities that are heavy on download speeds such as torrenting or streaming video.

We also found that HideMyAss doesn’t operate an anti-logging policy; they take session logs which are kept for several months. This is disappointing given that HideMyAss is owned by the security company Avast. That being said, they don’t keep personally-identifiable information. 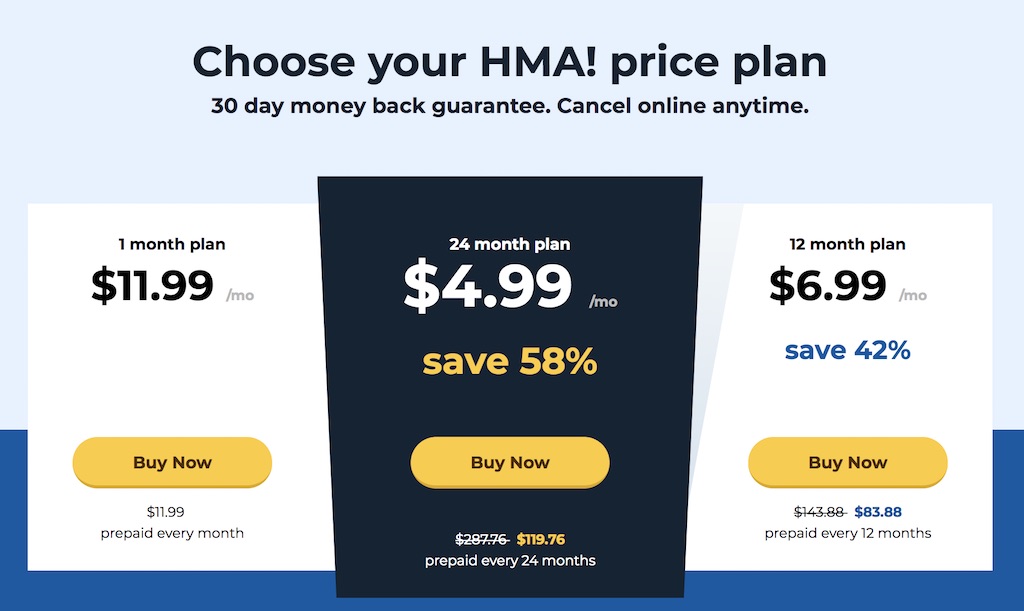 In terms of cost, HideMyAss is a little bit more expensive than most other VPNs. Their monthly subscription costs $11.99 but if you subscribe for two years, you can reduce that to $4.99.

You can try out HideMyAss free for 7 days, after which point you’ll be charged for a 12-month subscription unless you cancel. There’s a 30-day money-back guarantee as long as you haven’t gone over 10 GB of data or connected to the service over 100 times (this is an example of their session logging in action). 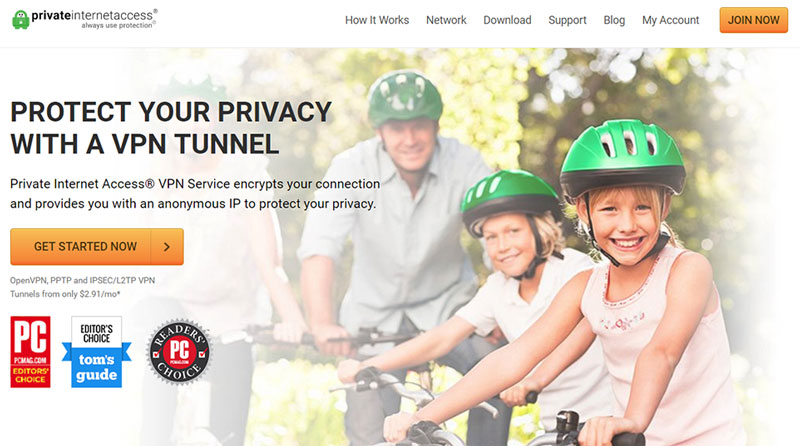 PIA is another VPN service you’re likely to see close to the top of any VPN review site or listicle. While it doesn’t do everything ExpressVPN can, e.g. guaranteeing to unblock Netflix, it is a fantastic VPN if you’re conscious about your privacy.

If you want proof that this VPN service won’t disclose your personal information even when challenged by the authorities, PIA has it. They’ve won not one but two court cases where the authorities were unable to get their hands on user information.

In fact, PIA is one of the most popular VPN services among Linux users due to the privacy guarantees. In addition to their proven anti-logging policy, PIA operates over OpenVPN alongside 256-bit AES encryption.

Add this on top of remarkable speeds, the ability to connect to five different devices, and lots of scope for customization, and you see why PIA has earned its spot on our list.

Month-to-month, the PIA service costs $6.95 (much cheaper than the other services featured here!). They have a 7-day money-back guarantee. This gives you full and unrestricted access to over 3,100 servers in 33 different countries.

Or sign up for two years and get a huge discount – you end up paying only $2.91 per month.

What VPN Do We Recommend for Linux?

It depends on what you want.

If you don’t mind playing around with command lines and want “the best,” then we recommend using ExpressVPN.

It’s the highest rated VPN across the industry and will suit just about any user. It’s fast, secure, has thousands of different servers to choose from, and has competitive pricing for longer subscriptions.

On the other hand, if you’d prefer to stay anonymous and safe, go for Private Internet Access.

This is by far the best VPN for privacy when you use it with an anonymous payment method.