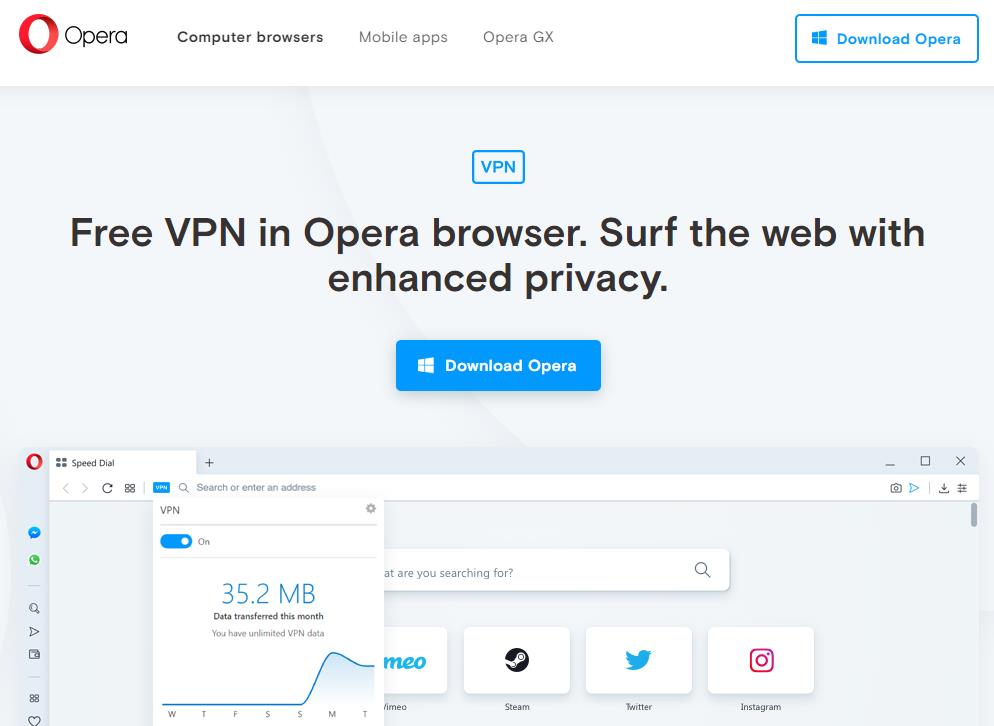 Opera VPN is a bit of a special VPN. It’s the free built-in VPN for the Opera browser. This means it can only be used on Opera.

If you’re a fan of Opera, or you like the idea of a built-in VPN that you don’t even have to think about, this might be a VPN you’ll want to check out.

So, it’s free, provides unlimited browsing, and is easy to use. But these aren’t the only features of a quality VPN service. The question is, does Opera’s VPN do a good job of securing your information?

Its speed with the United States server had an average of 96.36 Mbps for downloads and 97.81 Mbps for uploads. This even exceeds the speeds of other paid VPN programs and is close to the speed you get when you’re not connected to a VPN server.

With Opera, you won’t need to worry about video buffering time or download speeds.

We’re happy to report that yes, you can pull a Netflix marathon with Opera VPN.

All of the servers they offer can access Netflix without a problem. You can have a worry-free time watching your favorite shows, without wondering if you’ll lose the connection.

However, there are conflicting reports with Opera VPN’s ability to unblock Netflix, so if you find that it doesn’t work for you, check out these top VPN services that work with Netflix.

Pricing & Plans: Free for as long as Opera is free

Opera VPN is completely free of any charge. We love the idea of a built-in VPN for a browser.

Did you know that Firefox is also coming out with a VPN? You read that right, learn all about Firefox VPN.

The VPN does not require any account creation or signing up. 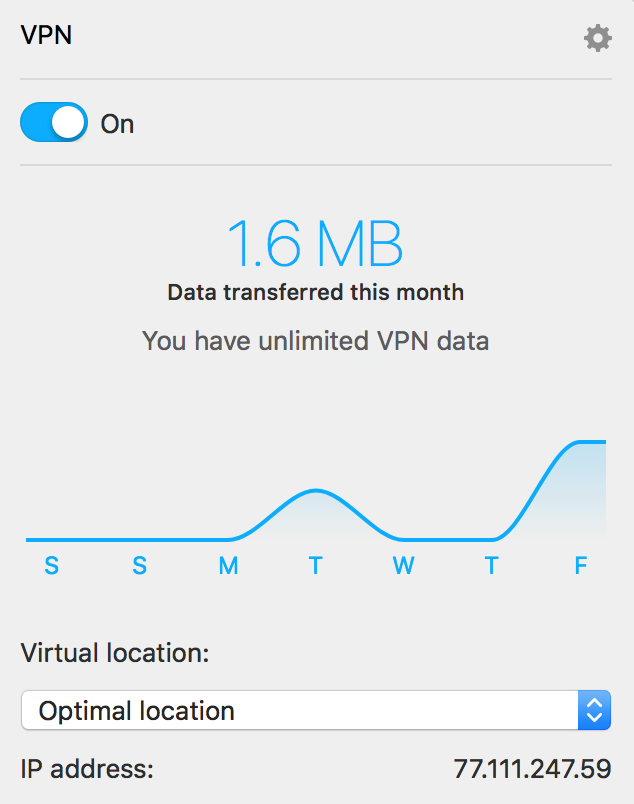 All you have to do is download Opera, go to Settings, and enable the VPN. It’s that simple.

Product Interface: If you like the Opera browser, you’ll love it (it’s one and the same)

Opera VPN provides a clear interface for users to use the service seamlessly. The necessary buttons are all laid out for you to see on the browser.  The settings, the switch, and the server list can all be found under the VPN window. 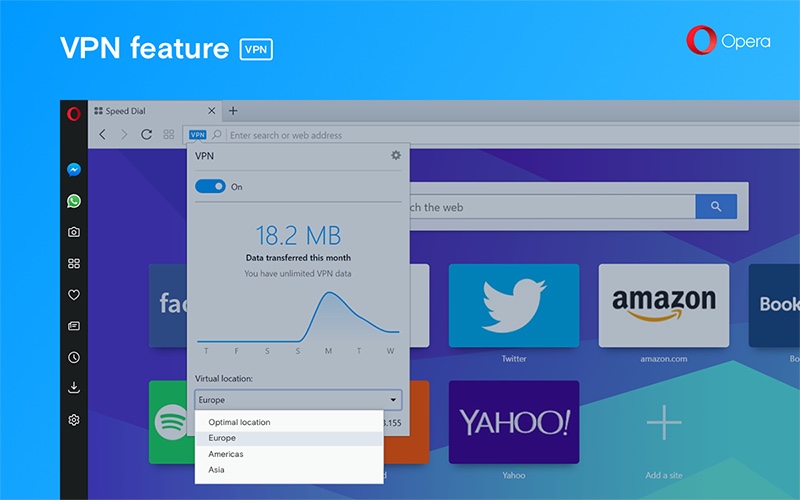 After enabling the VPN, you can easily switch servers by clicking the VPN logo in the search bar.

This is convenient since you don’t have to minimize and open other programs just to switch servers. Plus, it also shows a chart of the data that has been transferred using the VPN and your alternate IP address.

Opera VPN doesn’t provide separate customer service, but they do have a Help page for all users of the browser. They have a section dedicated to security and privacy, which also shows you how to use the VPN.

It’s quite detailed, easy to navigate, and accompanies additional support through their forums and blogs.

Opera VPN has a no-log policy, meaning no personal data is collected by Opera.

But is this the truth?

For starters, the VPN logs in the event of a crash, like most other VPNs. But these are all used to improve user experience and maintain their system.

Opera has a new policy, which states that the product features you use, the frequency of use, runtime environment, and UI session activity are all tracked by an ID. They say that the ID isn’t linked to your personal account.

When we collect your data, we associate it with a unique ID and a unique device ID that are generated when you install an Opera product or begin using one of our services. These identifiers are anonymized and cannot be linked to you as an individual person. We also take measures to remove any possible connections between these IDs and other types of personal data.

The ID can’t be connected to you, but they do collect some information. So just be aware.

Server and Locations: A choice of three continents

Choosing a specific country within the listed continents is not possible. This makes the connections pretty vague and hard to manage, especially if you want to be connected to a server in a particular country of your choice.

By any VPN’s standards, this is a low bar.

Since Opera VPN only functions within an Opera browser, torrenting is unavailable.

This is a shame for users who want to download torrents safely. But fear not! There are a lot of other VPNs for you to use when torrenting. (Check out our list of torrent-friendly VPNs.)

Device Compatibility: Only on Windows and Mac

Opera VPN used to be available on mobile. Sadly, Opera discontinued this to focus on providing the built-in VPN for Windows and Mac only.

IP and DNS Leak Test: Huh? We got some confusing results

The results of the IP and DNS tests were odd.

With the IP test, an alternative IP address was not found, while the DNS test showed multiple servers.

Despite there being no alternative IP address, Opera still managed to hide our IP address.

Encryption and Protocols: Is this really a VPN?

Opera VPN’s free service might have attracted you to download the browser and use the VPN, but it does not have impressive encryption.

Like other websites, they only provide HTTPS/SSL. This means that your data isn’t actually encrypted. If you’re looking for something more than just the simple bypassing of geo-blocked websites, this isn’t the VPN for you.

In fact, it seems like their VPN doesn’t really do what a VPN’s supposed to do at all.

A kill switch isn’t provided, but so is a price tag right? Its free service might console you for the fact that a convenient kill switch is unavailable.

Opera VPN as a Business 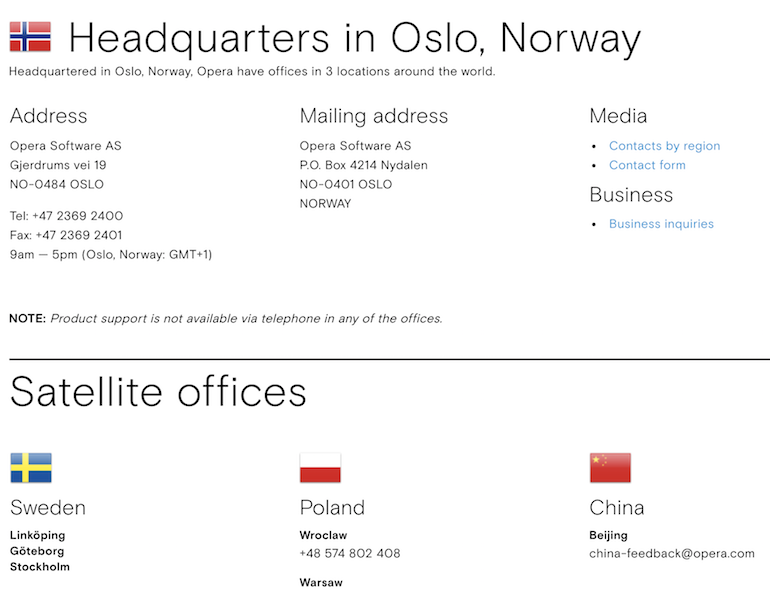 Opera Software AS is a Norwegian company that was founded in 1995 with the goal of giving web access to everyone. According to their website, they serve approximately 320 million users.

The Opera browser started as a research project at Telenor, one of the largest telecommunications companies in the world. In 2005, it was released as freeware.

Since Opera VPN is under a Norwegian company, it is under the 9 Eyes Alliance. This runs a risk of user information being collected and exchanged between the countries within the alliance if authorities require them to do so.

It’s also stated in their policy that they may share user data with government bodies, law enforcement agencies, and third parties.

At first glance, Opera VPN seems like a catch with its free unlimited service, but it’s a shame that its service is only available with Opera and no other browsers or programs.

Having a network in just 3 countries is a bit restrictive as well.

To us, it seems like Opera VPN can be used mostly for light browsing and Netflix. We don’t recommend it for users who are looking to be completely anonymous on the web since its encryption is unimpressive with only HTTPS/SSL and its company is in Norway, which falls under the 9 Eyes Alliance.

The odds are too high for you to depend on this VPN, which doesn’t work like other VPN services. Go figure.

For serious security, get one of our recommended VPNs.

Things to consider:
- No kill switch
- Based in Norway
- Only available on Opera browser
- No torrenting
- Weak encryption and protocols