Mozilla, the company behind the Firefox browser, recently announced that they will release a premium subscription model in the upcoming fall of 2019.

Let’s first go over what we know:

Various sources report that Firefox VPN will use a freemium model.

Much like Windscribe, free users will have some bandwidth allowance at no cost. If users want to increase their bandwidth, they will have to pay the premium subscription fee.

At the moment, we do know that Mozilla has a partnership with ProtonVPN. The current subscription stands at $10 per month for ProtonVPN customers. Mozilla is processing the payments and customers subscribing from Firefox receive the same benefits as customers of ProtonVPN. 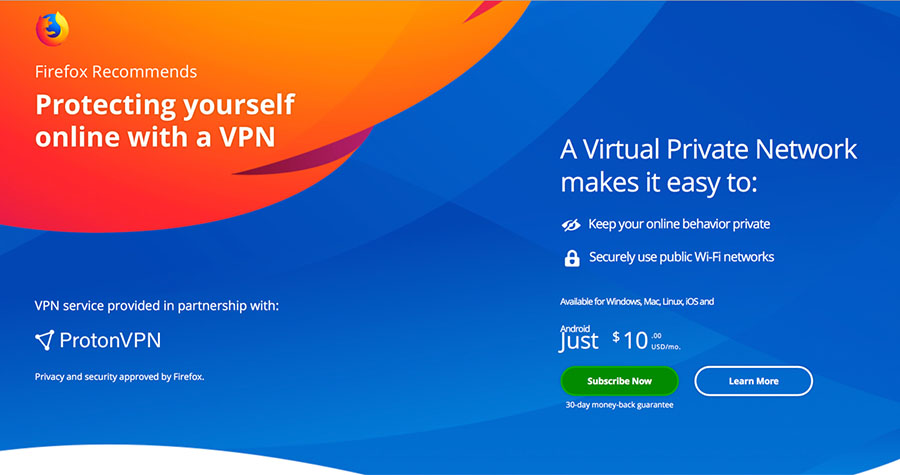 The features are not known as of yet.

We can get some ideas from Mozilla’s partnership with ProtonVPN.

Since ProtonVPN does not have a Firefox addon, it is speculated that Mozilla Firefox’s development team can work side-by-side with the ProtonVPN team to create a seamless integration. Since the premium subscription model includes a VPN, it will either be built-in to the browser or will be a browser extension.

The Firefox VPN could use ProtonVPN as a backbone – building a VPN service on top of ProtonVPN’s service. For those who are aware of the white-labeling model, this is one option that Mozilla has. Part of the subscription fee will go to ProtonVPN since the entire VPN service will be using their architecture.

We will roll out a subscription service and offer a premium level. And the plan is to introduce the first one this year, towards fall. We aim for October.

Mozilla isn’t too late with timelines according to previous performances. They usually keep their timelines in check and we will most likely see the Firefox VPN before the end of 2019.

Our review process is the most extensive in the industry