Home » NordVPN Servers – Everything You Need to Know

NordVPN has the largest VPN server network in the world.

At the time of writing this article, there are 5,112 servers spread across 60 different countries with some countries offering multiple locations (e.g. the US and the UK). You simply can’t do better than this if you’re looking for a huge number of server options.

No matter where you want to connect to in the world—unless, of course, you are wanting a server on Easter Island!—NordVPN has your back.

It’s not all about quantity, though; we would rather see a VPN service offering 500 good servers than 5,000 mediocre or low-quality ones.

Still, a large number of servers is a good sign. A VPN service that can offer over 5,000 and keeps adding to this number, must be doing something right and are able to handle such an infrastructure.

What Countries Does NordVPN Cover? 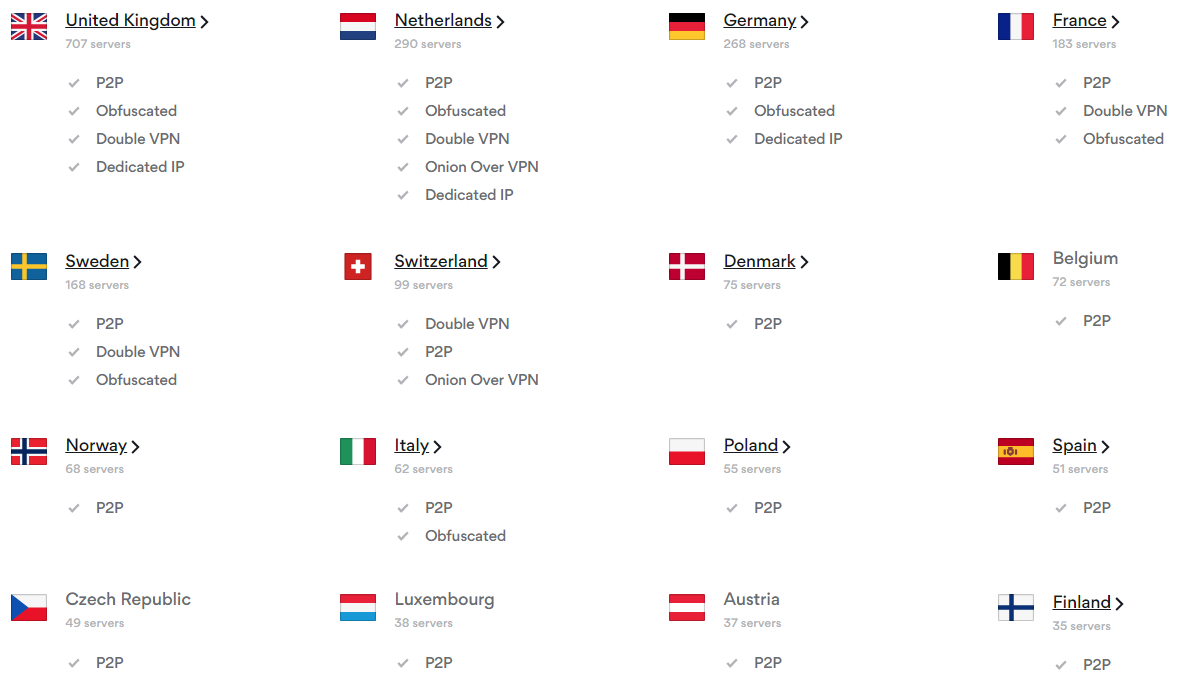 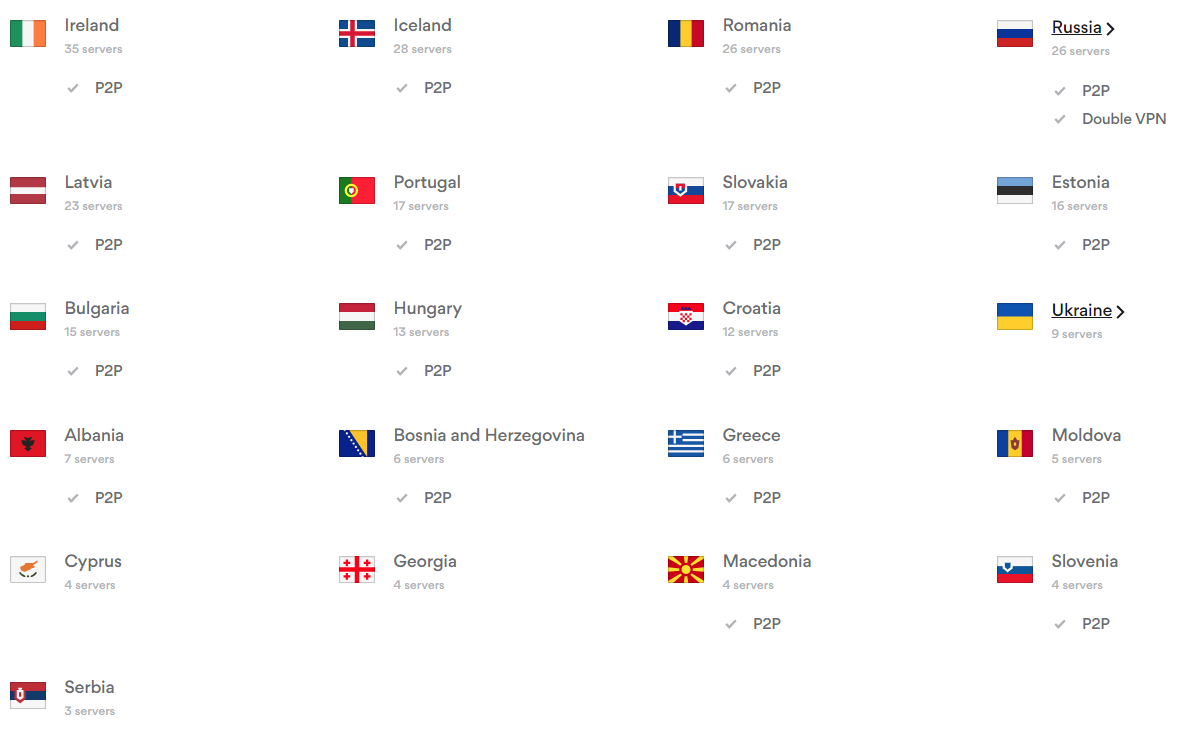 In addition, for those who are looking for a server list breakdown, we’ve done some additional research.

The following information is up-to-date as of May 2019 (Source: NordVPN support).

They offer a full suite of different servers that suit different types of activity and user, and all of them are lightning-fast and secure. 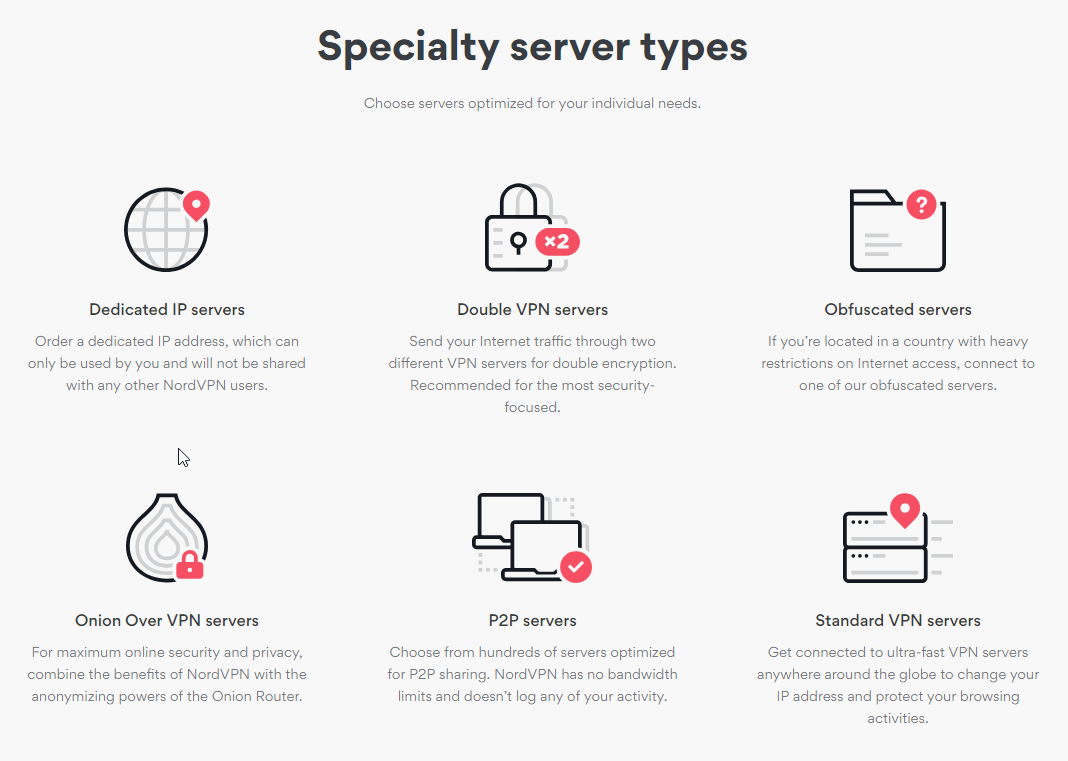 You may have noticed above that most of the servers have a checkmark underneath them (e.g. “P2P” or “Obfuscated”) and it is these that make NordVPN’s server offerings the best in the business.

When designing their network, they thought outside the box to appeal to the broadest possible user (and thus market) possible. We are going to go through each of these server types, look at where they’re available, and explain what they do.

NordVPN’s Dedicated IP is the only one of these six server-addons types that cost extra, and that’s because NordVPN assigns you your very own private, dedicated server with its very own dedicated IP that only you can connect to and use. 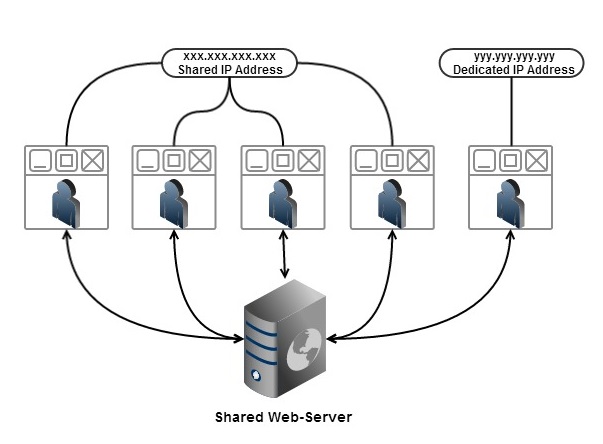 When you use NordVPN’s regular, public servers, most of the time your IP will change each time you connect. In addition to this, you are sharing that server’s resources with 50 to 100 or more people and while this won’t be a problem most of the time (because all NordVPN’s servers are very fast), there are certain times when having a dedicated IP will be beneficial for the end-user.

It costs $69.99 for a NordVPN dedicated IP each year and they are currently available in the US, Germany, UK, and Netherlands in a limited number of cities.

Double VPN is something that not too many VPN providers offer.

The Double VPN feature allows providers to offer an additional level of protection that cannot be achieved by a regular, single connection to a VPN server. It makes it a lot more difficult for hackers and other malicious third-parties to grab hold of a VPN connection and ‘break’ it because there are two layers of encryption to fight off.

This is achieved by routing your traffic not through one VPN server, but two. So, for example, if you are connecting to a UK server from the US, your traffic might bounce through France first, or any other suitable server, before reaching its final destination. 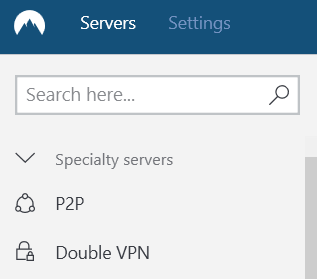 The result is data that is already encrypted and scrambled being scrambled even further by re-encrypting it. Furthermore, in the virtually impossible occurrence of NordVPN leaking DNS or IP information, it would point back to the first VPN server, not the end user’s real location.

Double VPN servers are useful for people who need extreme security or are trying to bypass very tight censorship.

Double VPN can be accessed from the left-hand list within NordVPN. Simply click on ‘Double VPN’ and NordVPN will determine the best servers for you.

In some countries, the internet is heavily censored and restricted. Chinese, some Middle Eastern, and North Korean citizens are prime examples of people who have their internet access heavily controlled by their authoritarian governments. In countries (e.g. China) where the authorities have gone so far as to block VPN services, it can be very difficult to download and install a VPN and then bypass censorship.

This is where NordVPN Obfuscated Servers come in.

They protect users connected to them with an additional layer of security and are clever enough to thwart heavy censorship by looking for alternative ways to connect to VPN servers when the standard method fails entirely. 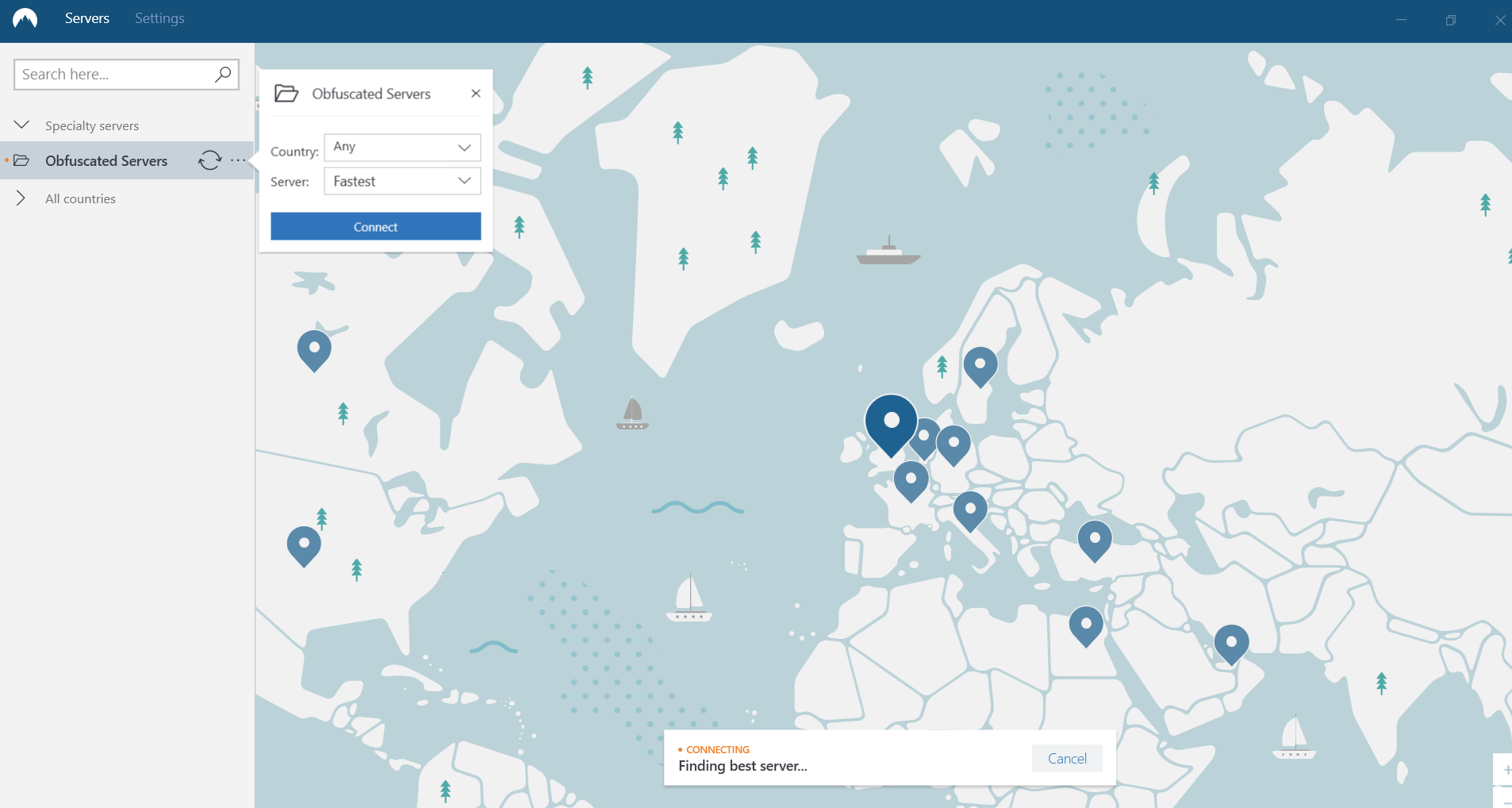 In NordVPN, when Obfuscated Servers are enabled in ‘Settings’, the main NordVPN servers will only show these servers in lieu of the regular ones. This enables Chinese users to bypass censorship and access websites such as Facebook, YouTube, and western news services.

Obfuscated Servers are only for the use of people who are connecting to NordVPN from countries with heavy censorship. Given that NordVPN is one of only a small number of VPN services that work in China, they are clearly doing something right with these.

Currently, Obfuscated Servers are offered in France, Japan, Netherlands, UK, US, and UAE. This means you are able to connect to these regions from anywhere in the world.

Do you use TOR to access the dark web (don’t worry—we won’t ask what you’re doing there)? If so, NordVPN’s Onion Over VPN (OOVPN) Servers are ideal for you. 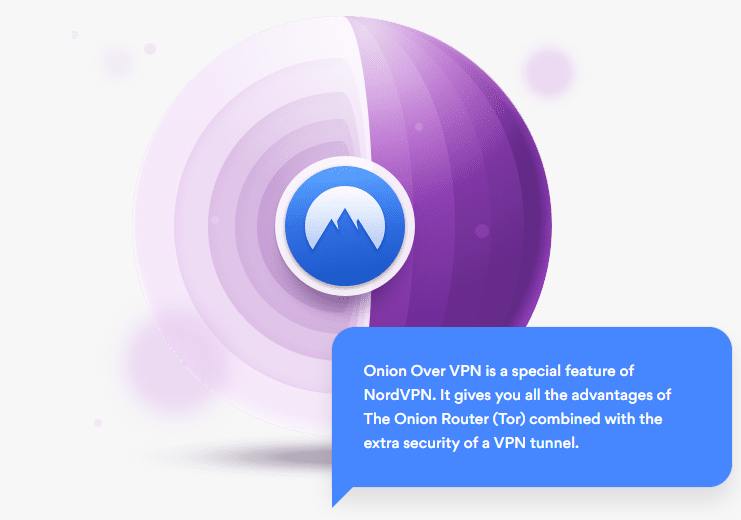 OOVPN Servers have been specifically designed to create a seamless and reliable connection between a pre-set group of servers—what you connect to—and the TOR Network—where your traffic goes—to provide an extra layer of security and privacy. They hide your IP address from TOR’s entry node; the owner of the entry node will see NordVPN’s server IP instead of yours.

This stops your ISP and any other third-parties from knowing that you are using the TOR network. Government and surveillance agencies are particularly interested in tracking people who use the TOR network, so using a VPN—specifically, a VPN that offers OOVPN Servers—is crucial.

What’s more, when you are using NordVPN’s OOVPN Servers you don’t need to use the TOR browser because NordVPN routes your traffic through TOR itself. Still, though, using the Tor browser is recommended as it is the most reliable one for browsing .onion sites.

At the time of writing, OOVPN Servers are available in The Netherlands and Switzerland, so you are able to connect to these two locations from anywhere in the world..

NordVPN is open to its users participating in torrenting and P2P activity, but only on servers that have been specifically optimized for this purpose. This is to prevent data-heavy torrenting activity being carried out on and slowing down servers that aren’t as powerful.

All NordVPN’s P2P servers are fast, secure, and have been designed with P2P activities in mind. You have two choices for P2P activity on NordVPN— 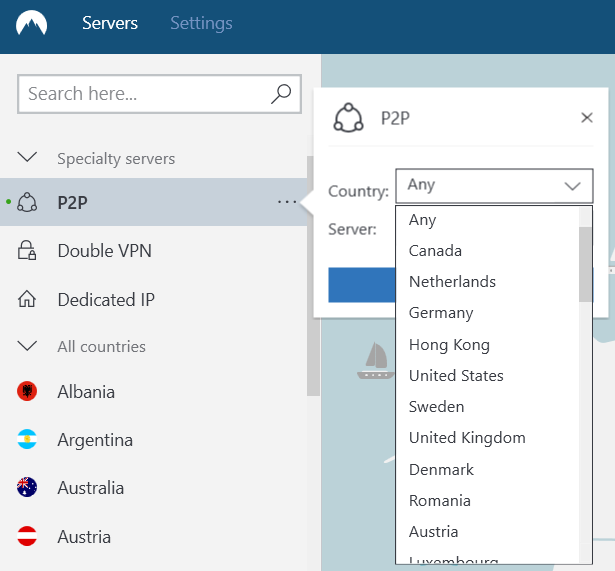 You can connect to NordVPN’s P2P Servers by clicking on the three dots (. . .) in the left-hand column next to ‘P2P’. There are plenty for you to choose from; the fact that P2P is only allowed on P2P-friendly servers in no way restricts or limits your choice.

It is always recommended that you use a VPN when participating in P2P activities anyway.

This protects you from malicious peers who could harvest your information; it hides your IP address, and it prevents you from being issued with DMCA notices.

Because NordVPN has a strict zero-logs policy and is based in Panama, they do not store any information about your activities while connected to the service and even if they did have logs, their Panama location means the authorities can do nothing to force their hand.

These are funny questions that people may ask but let us reply with a serious answer.

Not all servers are created equally. The best server is most likely the one nearest to you. If you’re in USE, connect to a USE server. They’re more or less all the same within the area.

The difference is if you’re living in a less populated country. Perhaps the server in your country is using some outdated hardware or is not being managed properly. If this is the case, the next fastest server would be the second nearest server to you.

Most of NordVPN’s servers are set up in a way so that the customers will get a seamless experience wherever they are in the world.

However, not all servers were created at the same time nor using the same hardware. There is a difference but you will most likely not be able to tell.

As you can see, NordVPN is a brilliant VPN service that has a whole lot to offer… even more than we have covered here! If you would like to take it for a spin yourself, you can try it out risk-free today by purchasing a subscription backed by their 30-day money-back guarantee.

This applies to all their subscriptions—from monthly to annual—and if you are not satisfied with your NordVPN purchase, you can ask for your money back by contacting customer services within 30 days of your transaction. No questions asked, no strings attached.