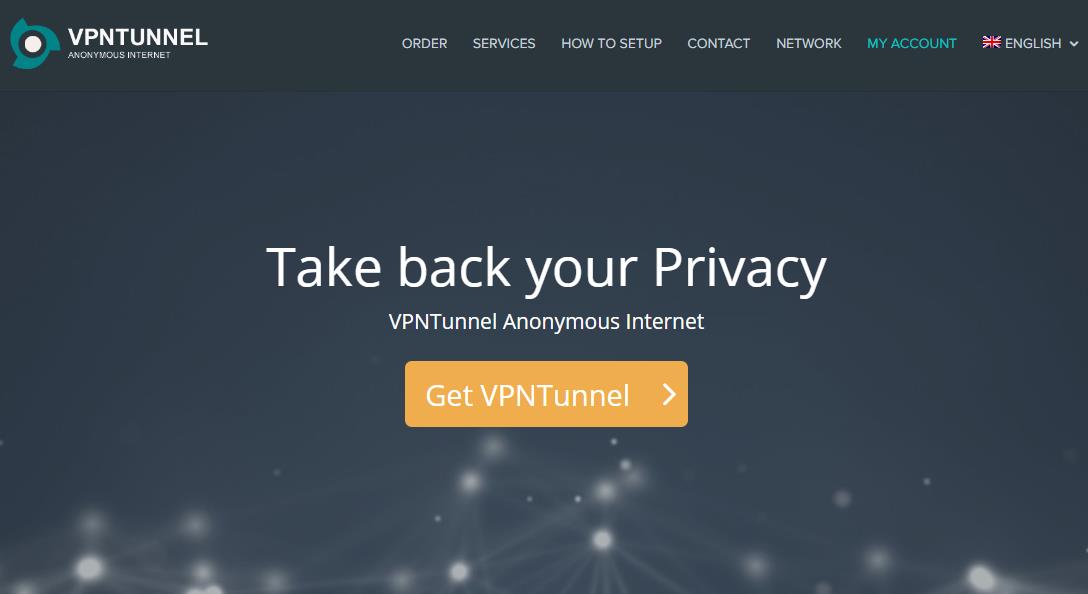 VPNTunnel claims to offer blazing speeds, unlimited bandwidth, and anonymous IP addresses. With a plain looking website, it felt like they themselves were pretty anonymous as well.

Here, we evaluate VPNTunnel’s claims and see if you really can take back your privacy using their service. Let’s dive into our VPNTunnel review, then.

Pricing & Plans: Extremely cheap if you sign up yearly

VPNTunnel’s base monthly price is fairly standard at $9.99. We’ve reviewed several VPNs that set $10 as their standard price. Where VPNTunnel differs is their 3 and 12-month pricing.

Firstly, 3 months isn’t a normal interval for most VPN providers as most set their middle ground at 6 months. That being said, at $6.66, VPNTunnel offers a competitive price for a 3-month subscription–to get this kind of price you’d have to sign up to ExpressVPN for a full year.

Lastly is their 12-month subscription. At just $2.99 per month, this is one of the cheapest annual plans we’ve seen–it’s on par with NordVPN‘s 3-year plan except you’re paying for a third of the duration.

Looking at just the price, VPNTunnel clearly presents a good long-term package to its users.

VPNTunnel provides a diverse set of payment options. As you can see, you can choose from credit cards, PayPal, Bitcoin (and other cryptocurrencies), Perfect Money, and even bank transfers.

Notably missing is Alipay from the list which is a shame since it has become the norm for VPN providers trying to capture the Chinese market.

Of course, we can’t forget about other anonymous methods like cash or gift cards which secure VPNs like PIA VPN have. 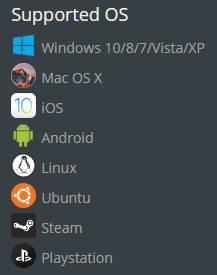 VPNTunnel has an exhaustive list of compatible devices. One of them being Steam, which has a very strict no-VPN policy. Included in that list as well is Playstation which again does not have native VPN access.

Looking through their configuration manuals, it does say that it will work by configuring your routers. And this is the answer to Roku, Chromecast, Amazon Fire TV, Playstation, and Xbox. We found no articles mentioning Steam at all. In fact, the few latter Supported OS listed on the footer aren’t actually links.

This is definitely something we’d consider as misleading from VPNTunnel; other VPN providers just outright say that you’d have to configure your router to do this.

Overall for those routers that they do actually support, it’s only DD-WRT and ASUS. Everything else is a standard list of products to support. If router support is a priority for you, we suggest you check out these best VPNs for routers. 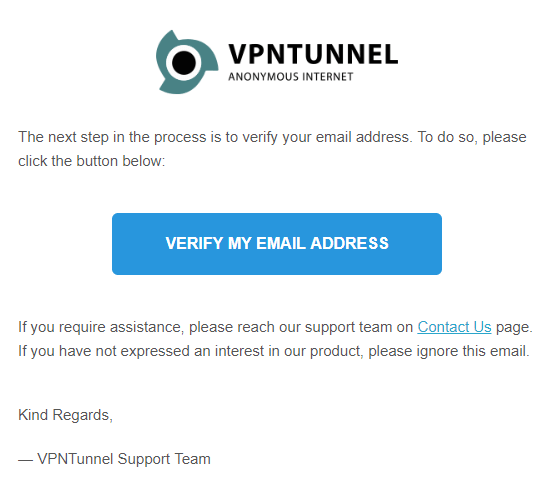 Signing up can be easily done through their website after purchasing a plan. You just have to type in your email address so they can send an email with the link to confirm your account.

The link will lead you a page where you can set your username and password up. They also give you an option to auto-generate those details, if you’re feeling lazy.

They have a clean interface that is nothing out of the ordinary. Most importantly, it isn’t confusing. 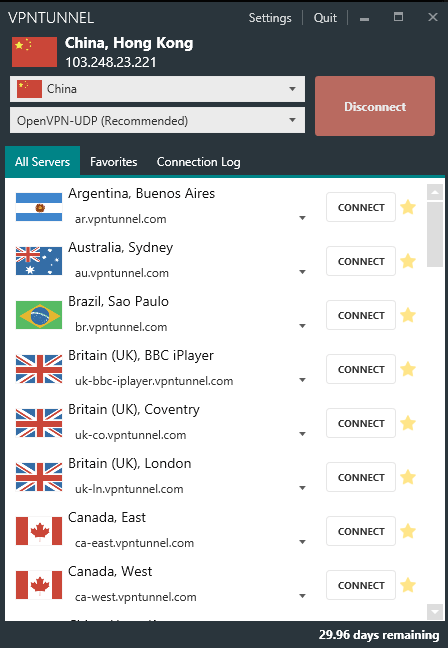 Click the VPN Client applicable to your device and the download will start automatically. After you’ve successfully installed the file on your device, go to your taskbar tray and select a server where you want to connect.

Their software has a “Favorites” tab which makes it easy to immediately locate and connect to a server of your choosing without having to go through their list.

Product Documentation: A complete guide to everything VPN

VPNTunnel’s FAQ section is relatively complete. The titles of the articles are clear and each section is well-defined. The install guides cover all the systems they support, even if the answer is “install VPNTunnel in your router.”

There are 2 main pages, Home and Solutions. Both pages seem to be the same, the redundancy seems more intentional than an oversight.

Still, they got nothing on ProtonVPN with their massive blog section.

We have to say, even if their speeds aren’t the best, or even good for that matter, IP and DNS leaks were non-existent when we ran tests. 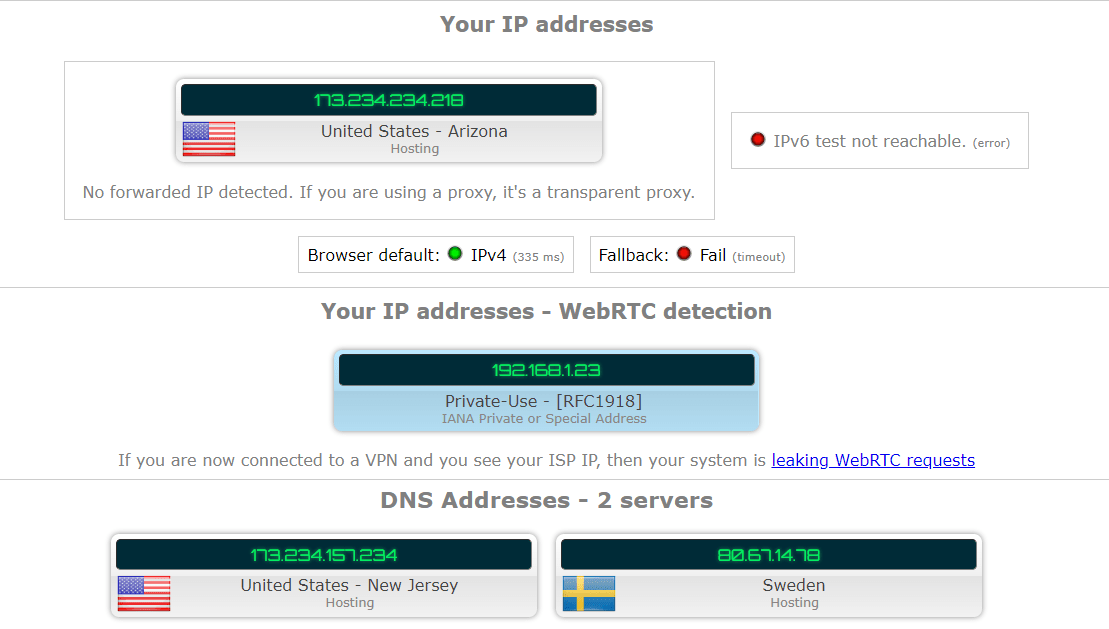 Encryption and Protocols: Plenty of protection

By default, OpenVPN is the preferred protocol, which is the industry standard at the moment. Along with a 256-bit AES encryption, VPNTunnel’s security is at par with most VPN providers offering services of the same price.

VPNTunnel has a kill switch. This feature eliminates the risk of unwanted exposure by automatically disconnecting to the internet when a VPN fails.

Servers and Locations: Going down?

VPNTunnel used to offer more servers in early 2019 but our latest findings show they only have 150+ servers in 32 countries. On their website, they also have a Network page which shows the server load and uptime figures.

So even before you signup you can already scan through their servers and check if the server closest to you is underloaded or overloaded. It even comes with a ping button to get the response times.

It’s always appreciated when VPN providers give potential customers a chance to preview their possible service in this manner (short of a free trial). Still, we’d like to see more global coverage.

Netflix Test: A couple of servers on offer

Binge watchers should feel free to subscribe to VPNTunnel and watch their favorite shows free of privacy worries. It offers 2 United States servers with Netflix, US-Netflix-East, and US-Netflix-West.

Their other servers can’t access Netflix, though. Still, if you’re one to look for US-content, then this is definitely a cheap way to go about it.

For those of you who won’t be content with two servers, here are the best VPNs for Netflix in our opinion.

Initially, VPNTunnel tells users that they have a worry-free P2P policy. This is great to hear; especially that they allow torrenting on all their servers.

However, this falls short in the fine print. With their usage policy is a line that talks about not allowing users to share copyright files.

This was also confirmed by their support team when we asked the same question. As will be discussed in a later section this is likely a legal loophole they’ve added to cover themselves.

As a result, we question VPNTunnel’s trustworthiness as a provider as we would with any VPNs that create confusing and contradicting statements.

Really, you shouldn’t be downloading anything illegally; that’s not what worries us. It’s the very muddied stance on everything; can we torrent? Can’t we? We’re confused, and that makes us feel uneasy.

It’s an iffy feeling, to say the least, so we suggest you pick another VPN for torrenting.

VPNTunnel does provide a refund policy. However, the policy only extends to within the first 7 days of use. As well as that, the refund policy is unconditional.

Given that this is a discretionary refund, it is advisable to find reviews or testimonials for it first in your region before giving VPNTunnel a shot. Especially, if you’re in a location that may have issues with VPN providers a lot.

The refund process takes about 10 days according to their Customer Support.

Good chat support is always a plus to any VPN provider, and VPNTunnel has one. Unfortunately, when we did try using it we often got a busy notification and found our message had become a support ticket.

Yes, there’s live chat. But how responsive VPNTunnel is to customers, is the question. Overall the experience with their live chat falls lower than other VPNs we’ve seen in the past.

However, when they were available, they responded with an answer in less than one minute. 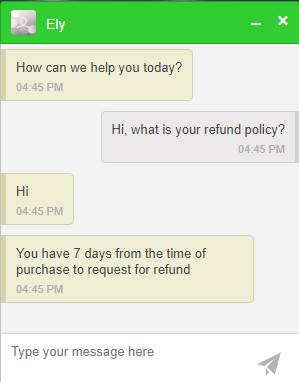 On the scrollbar is Customer Support tab where you can inquire and ask questions on Help & Support. Once you’ve typed your concern in the Subject area, the Customer Support generates results found in their FAQ. However, if they don’t have the answer to your questions, they will answer your queries via email.

Response-wise, we got replies to our tickets within the hour and for chat messages around 1-5 minutes. So both the ticket resolution and chat messages were relatively quick on VPNTunnel.

In a question as to where they are located, support initially said VPNTunnel is based in Sweden and then corrected by saying Seychelles; more raised eyebrows from us, as they continue with confused, disjointed communication to customers.

Initially, VPNTunnel advertises that they do not store any traffic data nor save logs. From this alone, it should be good news for most users as VPNTunnel promises a zero-logging policy.

Their fine print states they do collect data around payments and Google analytics (anonymized) which isn’t a huge concern.

This, however, is muddled by their confusing language in the fine print. Firstly, their disclosure policy states that they will share personal information with third parties if they are acquired by said third party.

If they are ordered to comply with any legal obligation, they will also comply with the local Seychelles laws. The chances of anything happening are slim due to the jurisdiction being outside of any alliance territory.

VPNTunnel offers unlimited bandwidth, but it begs the question, how well does it perform?

We checked 3 different servers from North America and Europe, and to our dismay, we found the speeds were wildly inconsistent.

Overall, the results are all over the place but towards the negative side of things – especially the connection to Asia. Our Internet package is no slouch either, so to see such bizarre results scattered across such a wide range is not confidence-inducing in VPNTunnel’s service as a whole. See the results below:

Some of these figures from the test results hurt our eyes. Losing over 70% download speed is no laughing matter.

VPNTunnel is a company based on the island of Seychelles. A wider search of them revealed they’re under a company called Edelino Commerce Inc. However, we weren’t able to determine exactly when they started.

Looking at their Facebook and Twitter, it seems they used to be active on social media. At this point, VPNTunnel’s posts are now a year old so it looks like that it isn’t important to them anymore.

Seychelles is a series of islands in the Indian Ocean. Being a part of the African continent, Seychelles is outside any Alliance groups. Moreover, their laws do not require companies like VPNTunnel to reveal personally identifiable information to the government.

Countries like this that help ensure customers that their data is kept safe.

VPNTunnel is a VPN service we’d rather not get; they’re OK in many areas, but do have one or two shortcomings.

The most egregious failing in their service has got to be the speed inconsistency. A free trial is also something they don’t offer. However, they do offer a 7-day money-back guarantee just in case you no longer decide to use their service.

They do have a kill switch, they allow Netflix (though it’s a bit limited), and they exist outside of the 14 Eyes Alliance. If you can accept slightly messy communications, equally inconsistent speeds, and unfavorable privacy policy then VPNTunnel might just work for you.

Or, keep on looking–starting with our top 10 VPN recommendations.

Buy because:
+ Has a kill switch
+ Netflix friendly-ish
+ Based in a country outside the 14 Eyes Alliance
+ 7-day money-back guarantee

Things to consider:
- Inconsistent speeds
- Support is on and off
- No free trial