VPN Shield is developed by Defendemus, a company whose motto is “We shall protect you.” That’s perfect for a VPN service, but it’s our job to find out if they live up to their motto.

The bold claim on their website states that they’re the “Most Advanced and Fast VPN Service for Protecting Personal Data.” Obviously, we didn’t believe this, since there are quite a few high-quality VPNs in the market, and VPN Shield isn’t usually one of them.

It’s not uncommon to see VPN providers tooting their own horn, but we gave it the benefit of the doubt. We’re always looking for lesser-known VPN services to surprise us. So, did VPN Shield deliver on our hopes and dreams?

Read on to find out!

Signing up was simple—just provide a username (email) and password. You don’t need to verify your email address to use the service.

Downloading and installing got a little confusing as we had to go through the Microsoft Windows store. Microsoft kept prompting us to link a Microsoft account to the VPN, but we ignored it and the app installed regardless. 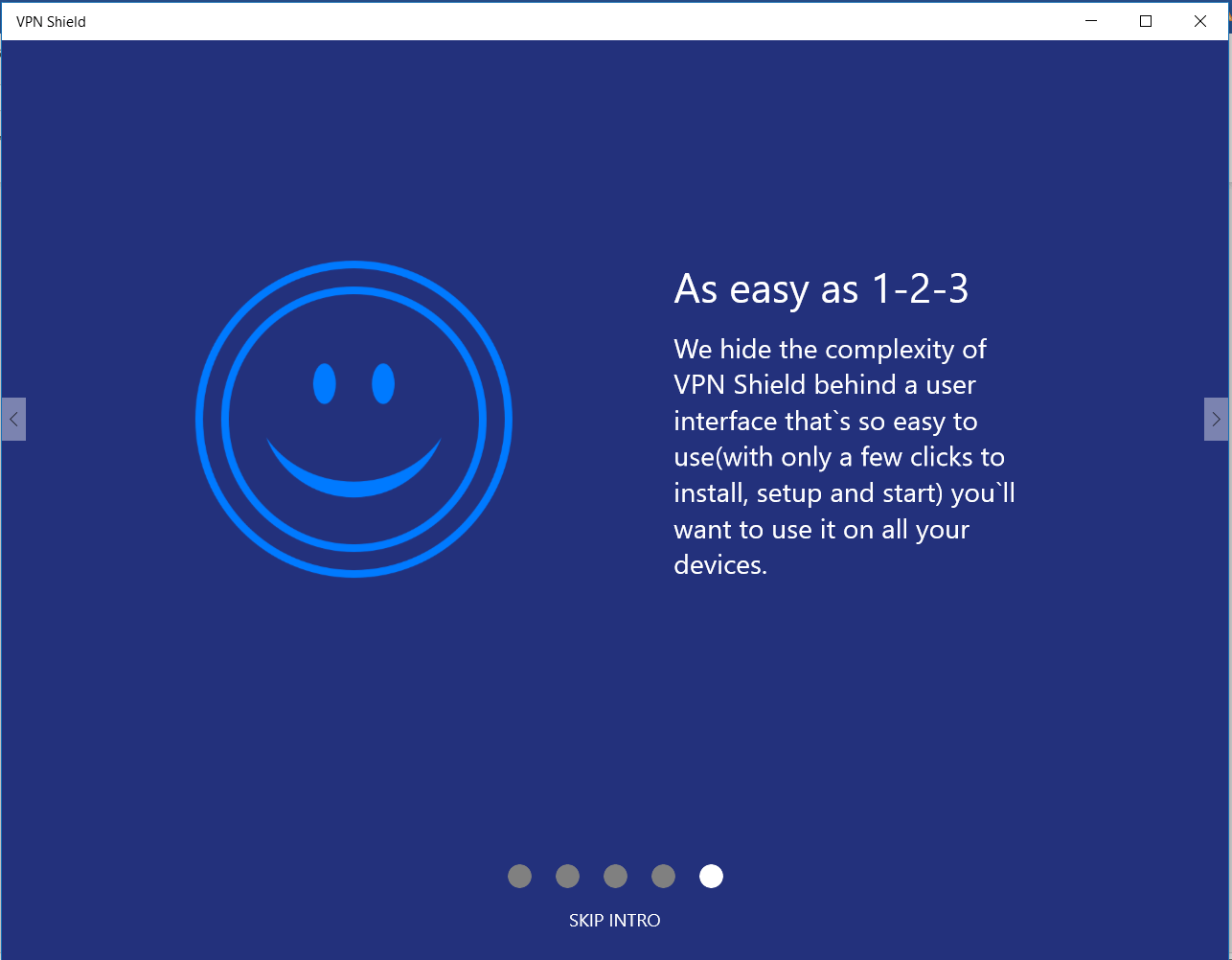 The product interface is pretty minimal and basic. It’s a practical design that gets the job done, but doesn’t have any special wow factors.

Once you’re past the introduction screen, the app looks like this: 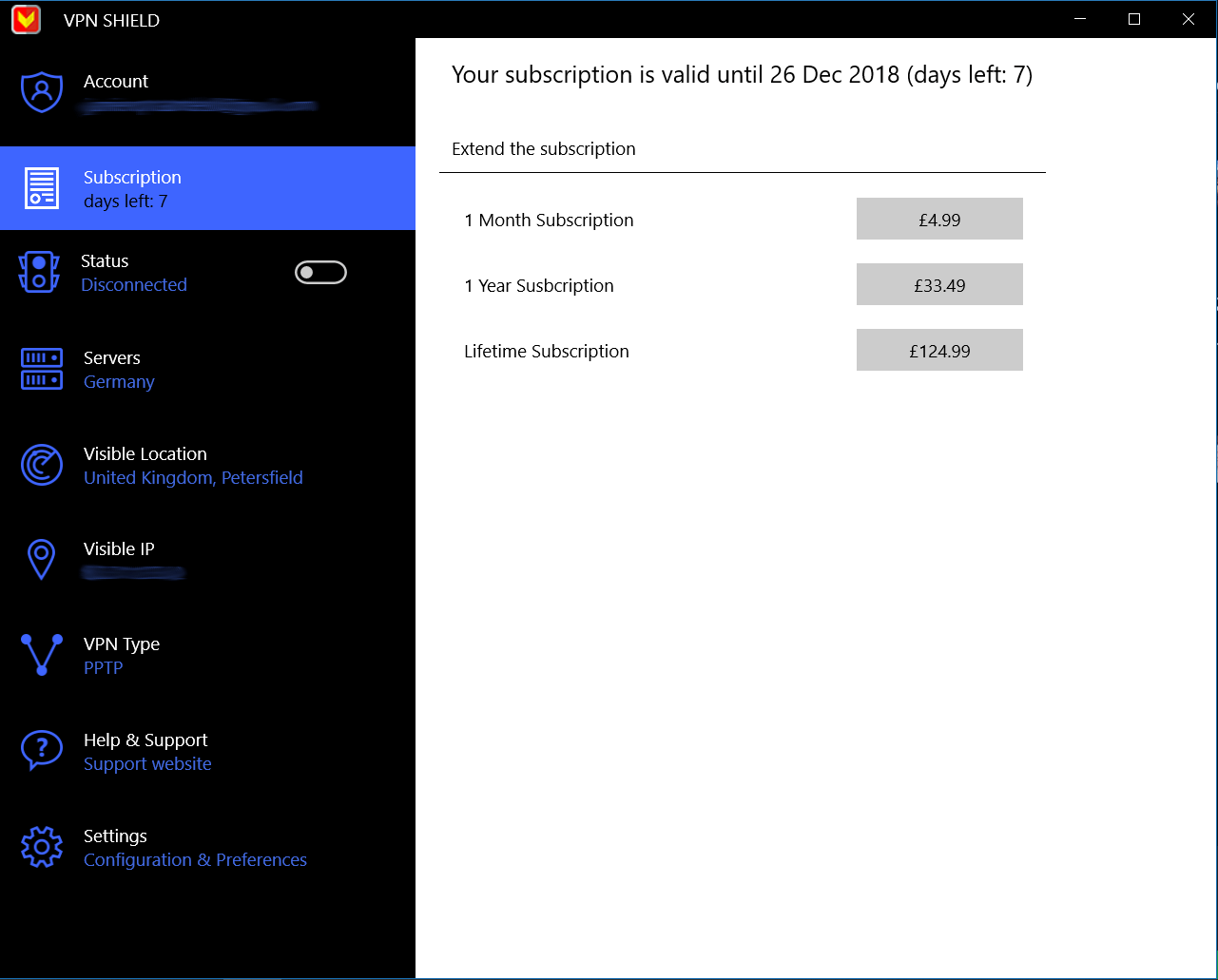 From here, you can choose different servers to connect to, see where your visible location and IP are, and play around with some settings and preferences such as which tunneling protocol you want to use (it doesn’t include OpenVPN, more on that later).

VPN Shield’s Terms of Service outline what kind of logging they undertake:

In short, they take session logs. Session logs are not data logs and VPN Shield cannot see who you are or what you are using their service for, but they can see device types and IDs, when you connected, how long you connected for, how much data has been transferred, and your purchase history.

While this is not a huge cause for alarm, it’s best when VPNs don’t log anything at all, period, because the above information could be pieced together by law enforcement agencies to tie certain activities to you. We’re classing this as Neutral; some may be bothered by any logs at all, but a session log might not be an issue for you personally.

Servers and Locations: Don’t expect to be impressed, there’s little to love here

We expected VPN Shield to have more on offer in terms of servers and locations. Unfortunately, the image below shows us all there is (and you’ll find it’s not much): 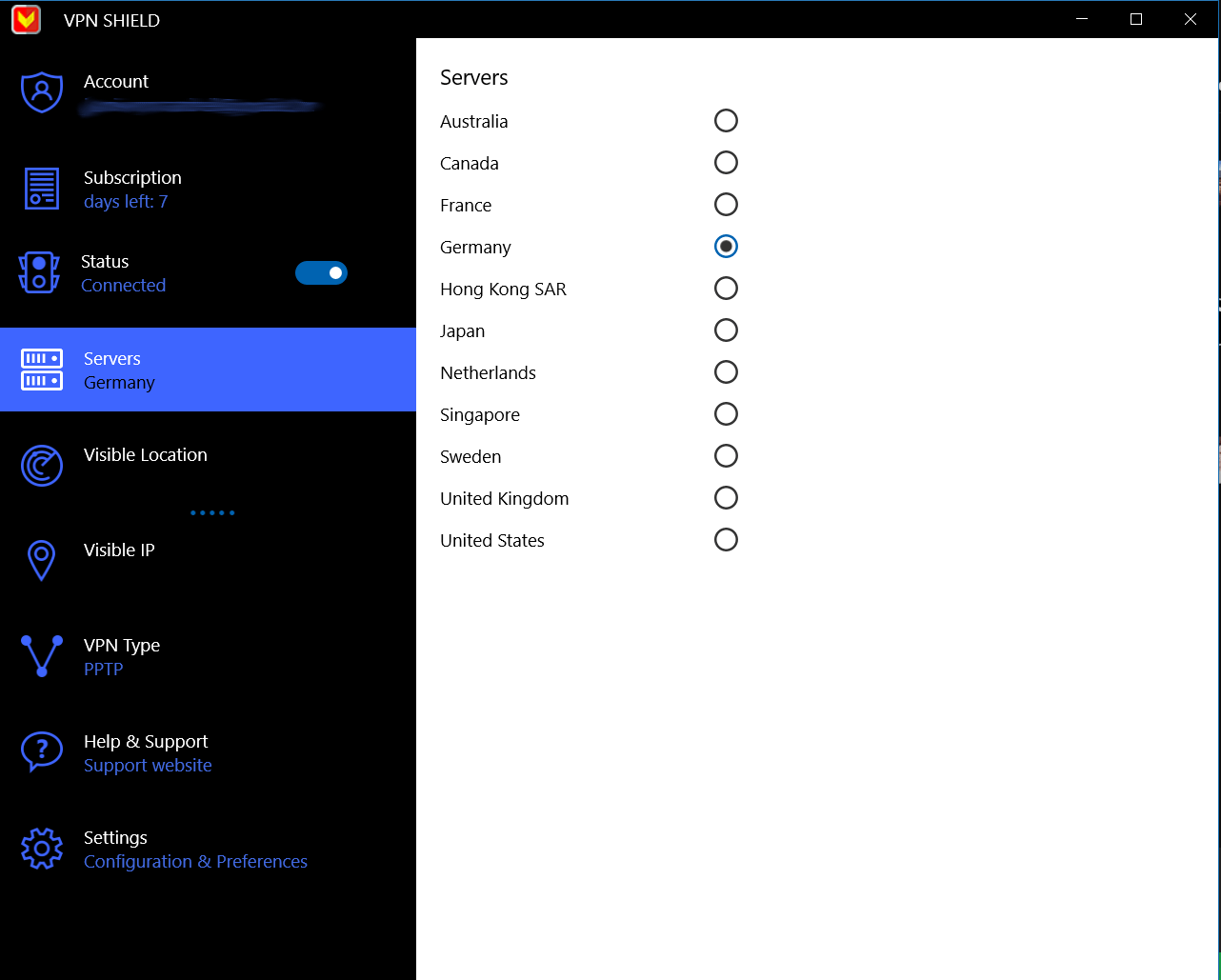 That’s a very poor offering for a VPN that has been around for a while; 11 servers in 11 countries doesn’t give you much choice – especially for the likes of watching Netflix or torrenting. Very disappointing.

We typically test VPN speeds by connecting to three different servers — U.S., Germany, and Hong Kong — and then running a speed test through speedtest.net. We test our own speeds as a control first, and these are the results when not connected to VPN Shield:

In fact, it wouldn’t connect to the UK, Australia, Canada, France, or Sweden. Not a great start. Regardless, we continued.

Finally, we got some success with Germany. But then something strange happened. When we connected to Germany, VPN Shield actually connected us to a server in Amsterdam. What’s going on here, VPN Shield?

Here are the results we actually managed to secure:

Also, when we connected to Hong Kong, we couldn’t get an internet connection and it managed to mess up our network which resulted in a hard reset.

Confusion from the German (Dutch?) result aside, these are some terrible results. Most of the servers don’t work and the one server that did work reduced our download speeds by a phenomenal 81.9%.

Honestly, we can’t believe they’re charging for this service. Overall, an extremely disappointing result. If there was a section below Con, this portion would go there.

Netflix Test: Not for us, or probably anyone

Netflix didn’t work on the one server that we managed to connect to. We can’t say we’re surprised. Netflix is cracking down hard on VPNs and smaller services like VPN Shield are unlikely to work when even the big name VPNs are struggling.

Our suggestion? Take a look at our top picks for VPNs that can unblock Netflix.

Torrenting Policy: No info, but it’s going to be slow as a tortoise anyway

There’s no information on the site regarding whether torrenting and P2P activities are allowed. At these speeds, however, VPN Shield is not a service that you’re going to enjoy using for torrenting anyway.

If torrenting and P2P are what you want to use a VPN for, look at other services that offer dedicated P2P support.

Pricing & Plans: Pretty reasonable (but is it worth it?)

Typically, we see VPNs charging around $60 per year, so this is a sizable drop from that average by a third. However, as you’ll discover in the Cons section, the price is not worth the performance. For a little more money, you can get a much better VPN service. The adage you get what you pay for applies here.

All these subscriptions include unlimited access to the VPN Shield native apps that can be installed across a decent range of devices.

Hidden away in VPN Shield’s T&Cs is their refund policy:

“Our support team always likes to help you with any technical or administrative difficulties. Please email us at [email protected]. If you are not completely satisfied with our services, you are entitled to a full refund during the first 10 days of usage.”

Because VPN Shield is downloaded through the Microsoft Store on the PC, the Google Play Store on Android, the Apple App Store on iOS or MacOS, and Amazon on Kindle, you can claim your refunds through these services instead of contacting VPN Shield directly.

Payment Methods: The basics are covered, but not much else 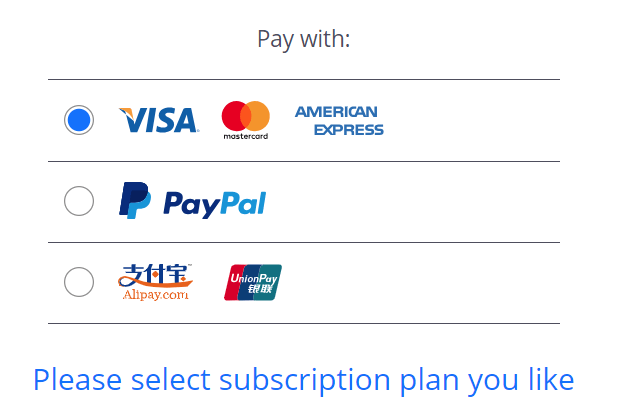 This is another basic area for VPN Shield. They stretch as far as credit or debit card, PayPal, and AliPay or UnionPay, but that’s where it stops. You won’t find anonymous payment methods like pre-paid cards or cryptocurrency.

Most VPNs offer at least one anonymous payment method. VPN Shield does not. We’re docking a point for that.

You can get VPN Shield for Android, iOS, macOS, Windows, and Amazon Kindle. There’s no support for Linux, routers, or other smart products such as TVs and games consoles.

Each of these 5 has its own native app that can be downloaded from its respective store. This includes the app for Windows which you must download from the Microsoft Store.

It just installs as a Windows app, just like the other services on our list of best VPNs for Windows – bear that in mind if you plan to go for VPN Shield.

VPN Shield has a dedicated FAQs and knowledgebase section that answers some basic questions, but there’s nothing too in-depth or technical there. It doesn’t even come close to the extensive FAQs other services offer. 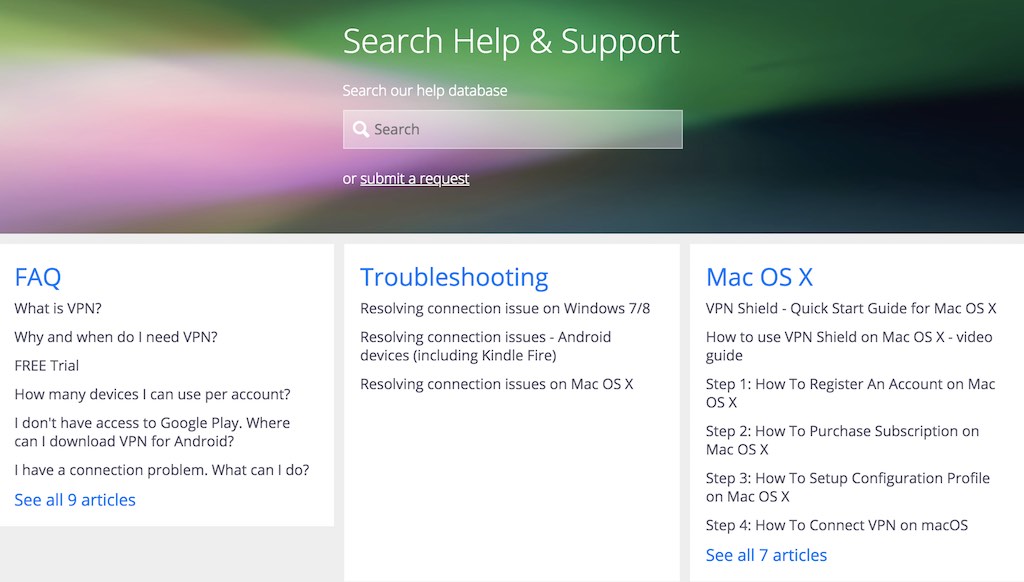 After you finally locate where to contact customer support (it’s hidden away in the site’s footer in tiny fonts), you’ll encounter a contact form. There’s no live chat, social media support, or forum. That’s not a surprise really—the VPN has let us down in many areas already, so we weren’t expecting spectacular customer support anyway.

Encryption and Protocols: Protection you can’t rely on

The VPN Shield site claims that they use AES Encryption, but it doesn’t say what type. 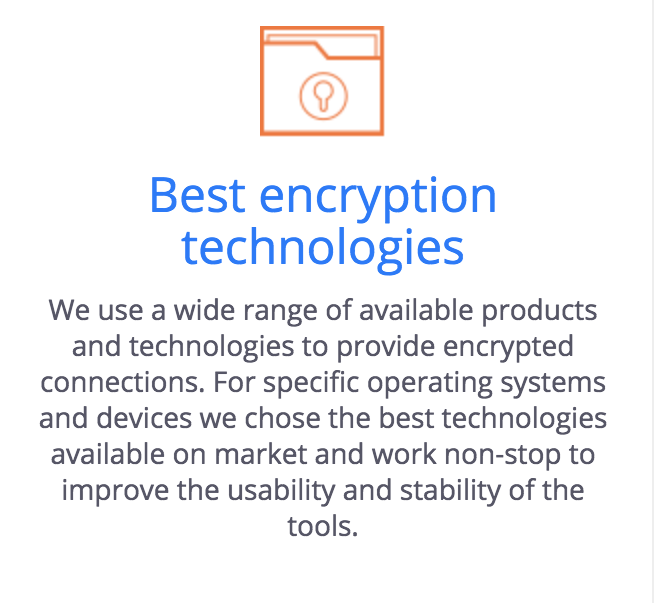 Now, this is a large chunk of text that doesn’t illuminate us at all. Generally, when a VPN service is as vague as VPN Shield in describing their encryption methods, we find that it’s sub-par.

Instead, they use PPTP, L2TP, and IKEv2. Definitely not good.

Anyone who’s serious about their privacy would only use a service that offers OpenVPN alongside AES-256 encryption. Given VPN Shield’s protocols, we suspect they’re using AES-128 which is weaker than AES-256.

Looking for protection? VPN Shield is likely to let you down.

IP and DNS Leak Testing: Leaks all over the place (VPN Shield, don’t ever try building a boat)

Both IP and DNS leaks were detected when we tested VPN Shield while connected to their server in Germany (the only one that works!)

VPN Shield does not include a kill switch. After the roasting this review just gave VPN Shield, were you expecting one? Yeah, neither were we.

A kill switch is an absolute must-have for any VPN. Without a kill switch, you run the risk of having your IP address and other data such as browsing sessions exposed if you lose connection to VPN Shield during an active session.

A kill switch steps in to terminate your internet connection when your VPN connection drops. Without it, you are left vulnerable.

VPN Shield as a Business

VPN Shield is owned and operated by Defendemus LLC. Since 2011, they have operated VPN Shield and it’s their only product. They call themselves an “international team of specialists… focused on developing mobile, workstation and server security systems.”

VPN Shield is based in Poland. Poland is outside of the 5, 7, and 14-Eyes agreements (officially called the UKUSA Agreement) between countries that promote the sharing of intelligence and information.

VPN Shield Conclusion: Run to a galaxy far, far away

Don’t spend your money on this joke of a VPN, seriously. Sorry, VPN Shield, but you had this coming. Our experience was one of the worst we’ve seen from a VPN to date.

Why would you pay to use a buggy VPN where only one server works and delivers terrible speeds at that? To put the nail in the coffin, the VPN itself doesn’t support OpenVPN, likely uses AES-128 encryption, leaked our IP and DNS information, and does not include a kill switch.

These reasons alone are enough to tell you not to bother. In addition, there’s no Netflix support, dubious torrenting support, and connecting to their Hong Kong server completely messed up our network so that we had to perform a hard reset. By the way, this happened not once, but twice.

Save yourself a headache and instead go for one of the better VPNs; ExpressVPN, NordVPN, and CyberGhost are good choices for a reason!

Buy because:
+ Based in Poland
+ Unique native apps for different devices
+ Relatively cheap

Things to consider:
- Session logging
- No OpenVPN
- Unknown AES encryption
- Only one server worked for us
- No Netflix
- Unknown torrenting support
- Slow speeds