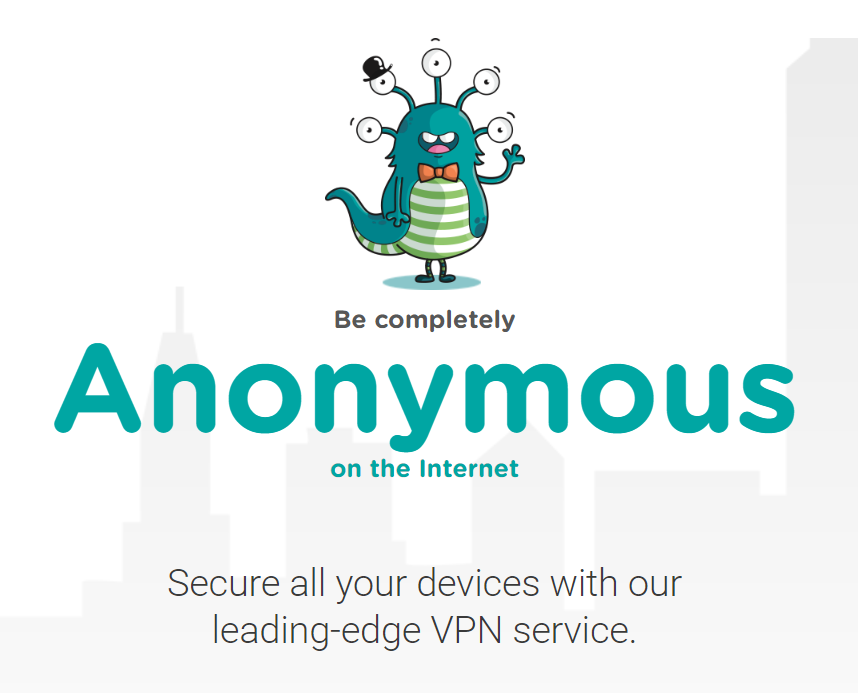 If you’re familiar with torrent-streaming service Popcorn Time, VPN.ht is its VPN brother!

These two services both demanded to be shut down due to being one of the largest sources of movie piracy. Yet, we see both of them still alive and kicking; does that mean they’re too popular and powerful to be dismissed?

In this review, we take a look at VPN.ht and the features it offers; is it a good VPN or is it just holding onto the coat-tails of its infamous brother?

The slower speeds are largely attributed to the encryption that data has to go through and the time the data needs to bounce from one server to another.

We tested the speeds for VPN.ht and the results weren’t bad – at all.

Streaming high definition content was never a problem, neither was downloading large files.

If you are in need of even faster speeds, you can reduce the level of encryption from 256-bit to 128-bit to get a nice little boost.

Lowering the encryption level still maintains a secure connection with the added upside of better latency and transfer rates.

It’s really great that VPN.ht works with Netflix; a lot of VPNs miss the mark here, and it’s one of the main reasons people sign up for VPNs. Good job, VPN.ht, you did it!

If you’re looking specifically for VPNs that work with Netflix, we have more (better) options for you right here.

Well VPN.ht, you continue to impress!

VPN.ht has been involved in torrenting for the longest time, it’s gone through a lot – including legal battles.

This has shaped VPN.ht well enough to be a really solid VPN option for torrenting, and they offer a strongly supported environment for torrenting.

Otherwise, check out our top VPNs for torrenting for more options.

Pricing & Plans: How cheap is cheap? How about $1 for a month? 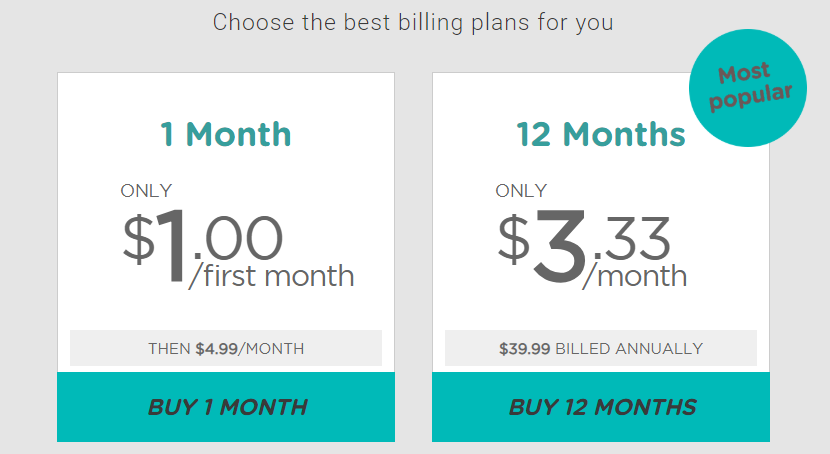 The first month costs a single dollar – a dollar? Excuse us while we rub our eyes to check we’re not misreading. Nope, definitely a dollar.

Overall, that’s freakin’ cheap – there’s no arguing that. So far, VPN.ht, we’re impressed on all counts. Is there anything VPN.ht can’t do? (see the Cons list, there is – sorry, spoilers!)

VPN.ht go the extra mile by offering a multitude of payment options, including cryptocurrencies of all varieties. 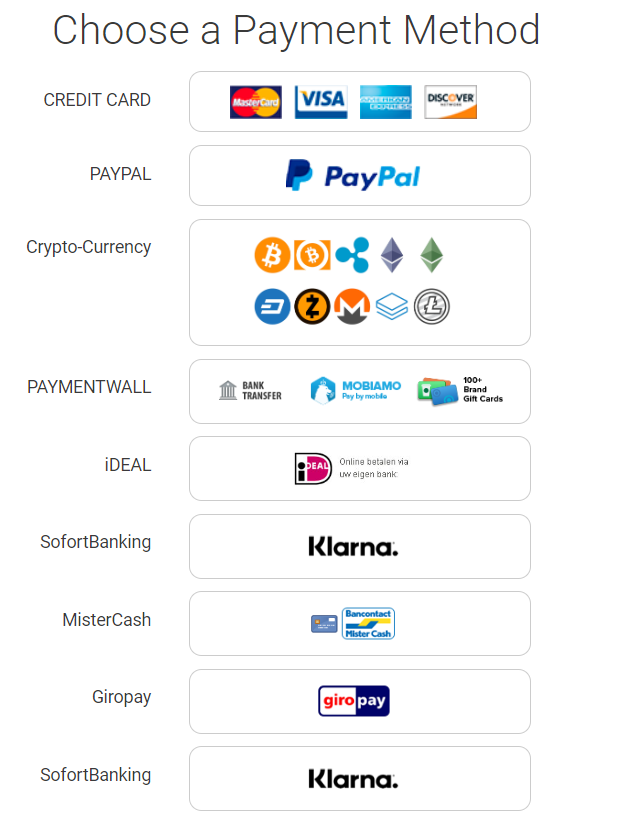 The cryptocurrency options aren’t just limited to Bitcoin but also offer to other alternative coins such as Ethereum, Ripple and more. We’re getting the feeling this review might be turning into a long list of Pros for VPN.ht – curse you and your good service, VPN.ht!

Refund Policy: Very generous (okay, seriously, what is VPN.ht hiding? If something’s too good to be true…)

What amuses us about VPN.ht is that they offer the first month for a cost that’s next to nothing and yet still give users a 30-day money-back guarantee.

This is a far cry from other budget VPNs that offer a limited trial/money-back periods, with the typical busywork to get your money back.

Device Compatibility: Use it on just about anything (does your toaster have Wi-Fi?)

VPN.ht casts a wide net with their device compatibility.

Windows, macOS, Linux, Android, and iOS – the most common platforms are all covered.

There’s also support for routers which enables any Wi-Fi-compatible device to have access to the VPN service.

The standard plan offered by VPN.ht only allows for a maximum of 3 simultaneous users (the “standard” is around 5 with premium VPN companies like NordVPN).

Thankfully, router support removes that limit in lieu of allowing the limit to be as many devices as the router can support.

Signing up for VPN.ht involves a few steps; it’s not difficult to do, but it can be longer when compared to other VPNs. 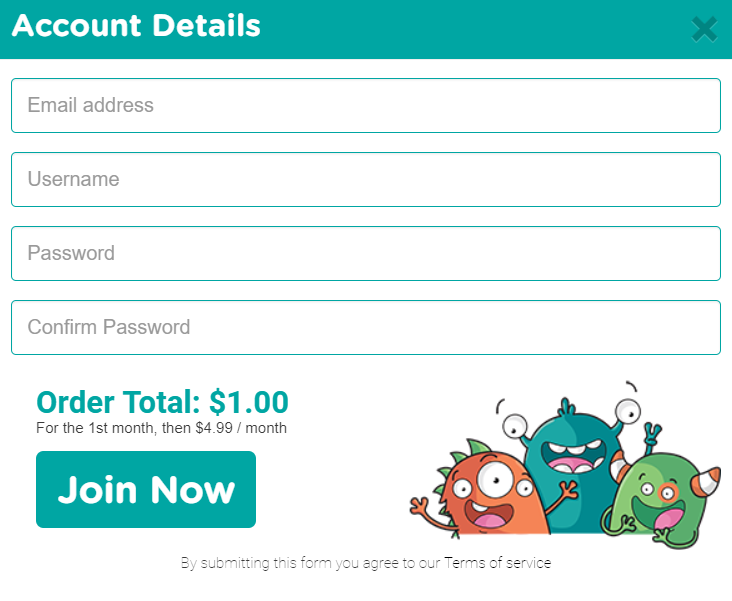 Once you choose to subscribe to their service, you will be asked to input some basic information.

For the sake of anonymity, you can just make up an email address; just make sure it works!

Once you’ve created your login credentials, you’ll be led to the payment screen. 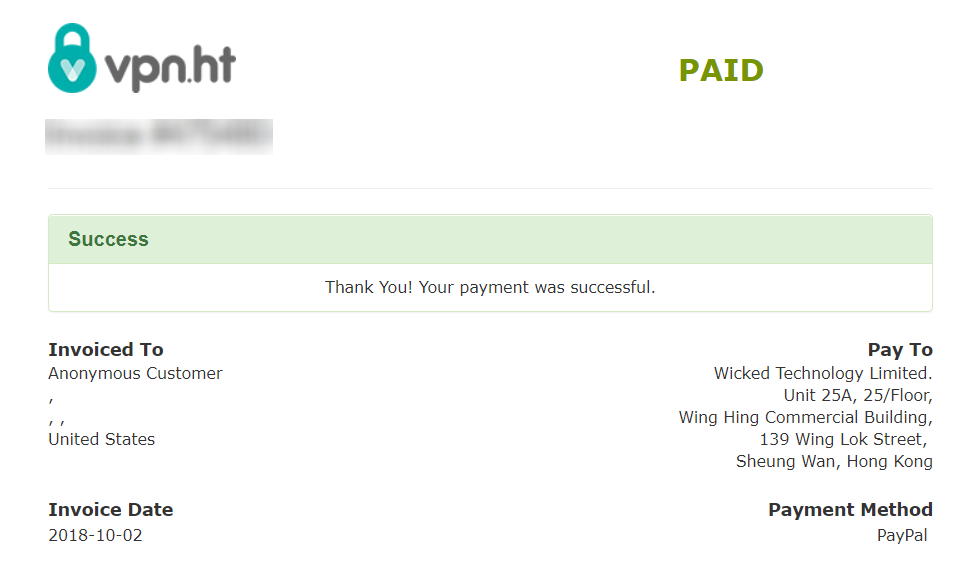 For this review, we tried paying with PayPal and we were given an invoice right away for our subscription.

A good sign that VPN.ht values your anonymity is that they don’t include your name on the invoice. 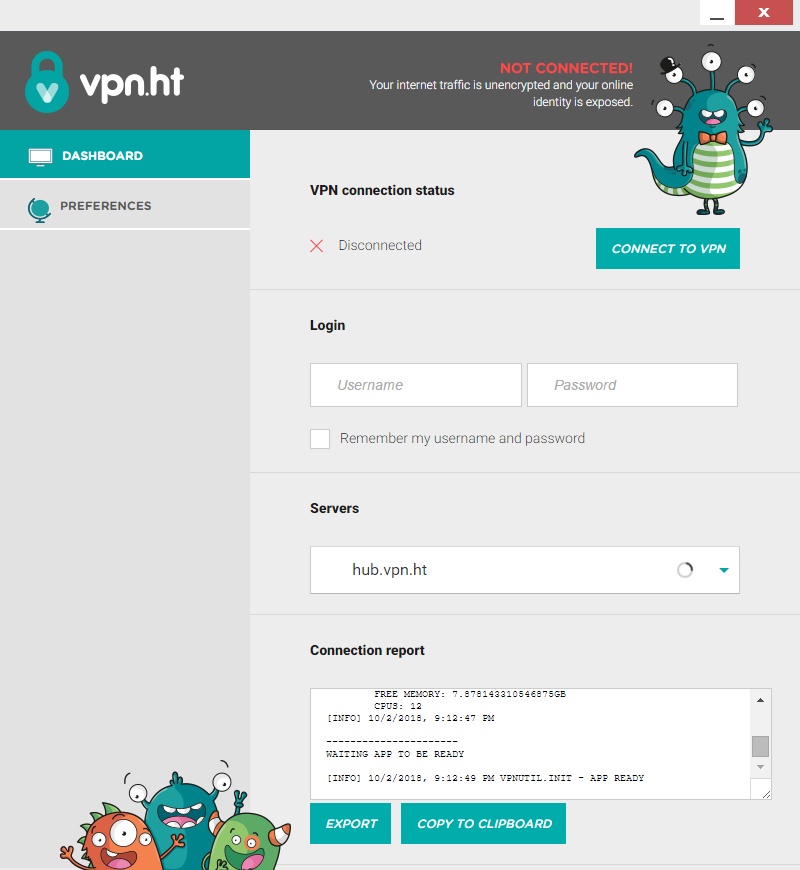 If we nit-pick the UI, we don’t like that the login portion is incorporated into the main user interface.

Most VPNs would have login on a separate screen.

Having it permanently on the main menu just makes the UI busy.

Overall though, it’s a sleek and stylish interface – we’ve seen some real Y2K-type VPNs, so seeing something modern is always a pro in our eyes.

Our favorite part of the UI? We still see those happy little aliens from the website! Oh yes, the connection report that lists your entire activity back to you is cool too. 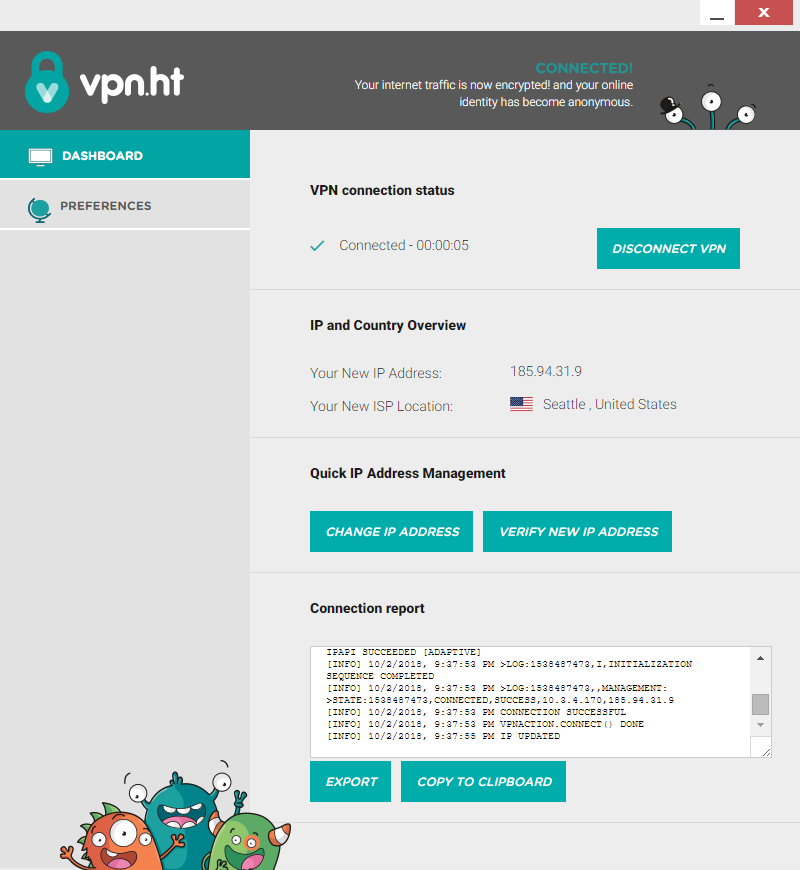 Once you’ve entered your login credentials, you’ll be able to connect to your chosen server.

The display will show you your current IP address and the location of the server.

It will also show the length of time you’ve been connected to the server.

Logging Policy: Absolutely No Logs (They really mean it!)

A lot of VPN providers claim to keep no logs, yet still, some of your “harmless” information is kept – well don’t worry, because there are no leaks, logs, or lies here.

Obviously, like any other website, they do use tracking tools. They want to know how to convert users. On the VPN client side, however, they will not log any of your activities.

It was reported for a time that VPN.ht was vulnerable to DNS leaks. Fortunately, this has been fixed and VPN.ht is more secure than ever. 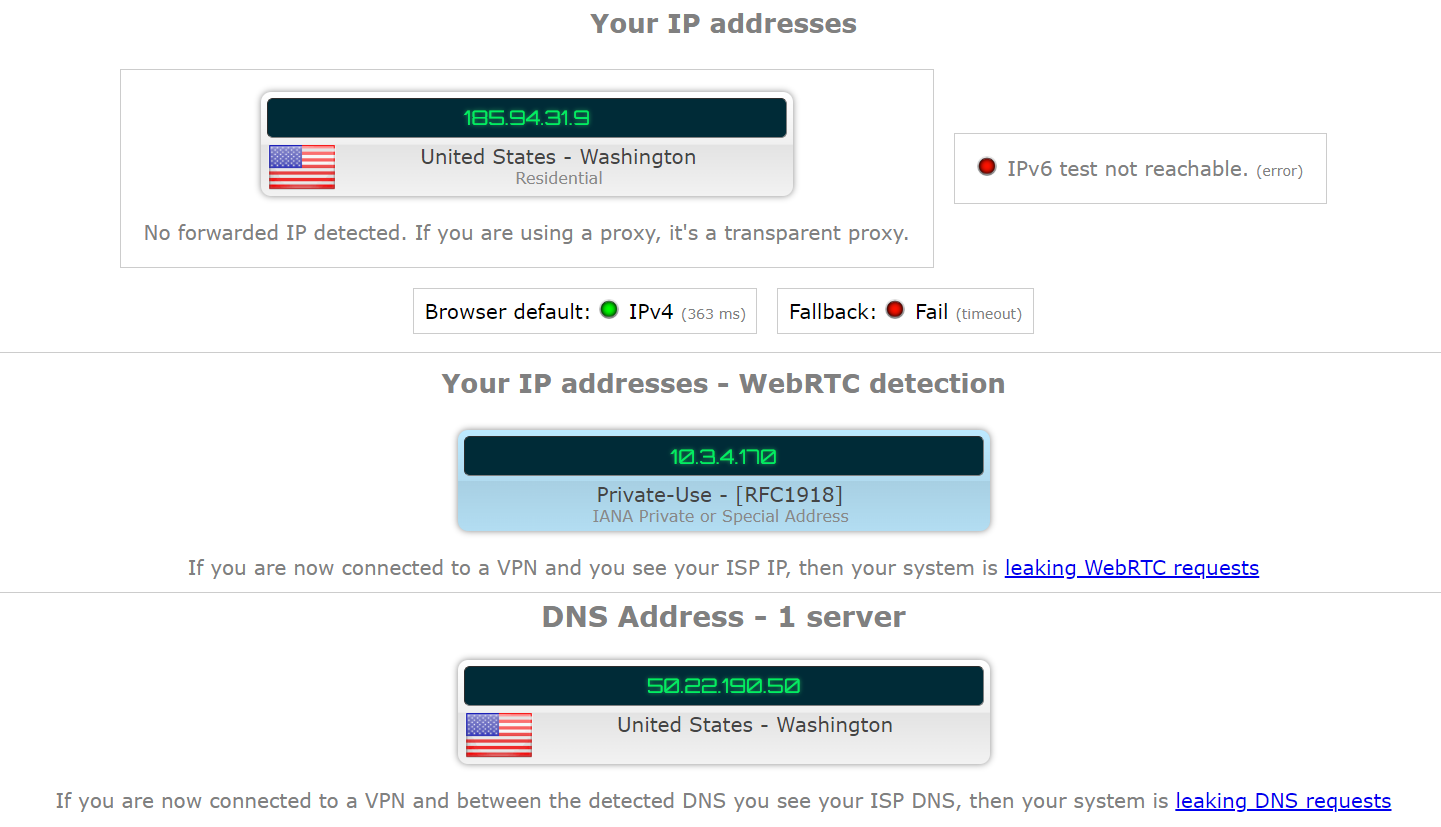 Multiple DNS leak tests show no signs of leaks from VPN.ht in 2019. 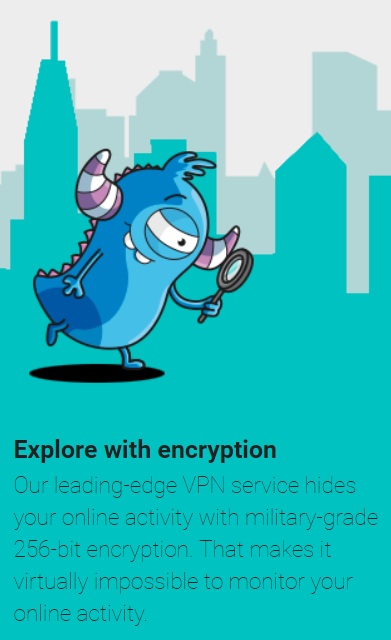 It’s why you’ll find VPN.ht using it, and also gives you options to adjust if you want (as mentioned earlier, it can help improve speeds).

Despite the small number of servers, VPN.ht manages to spread their servers in 18 countries around the world, offering fair coverage for a small VPN.

Still, it’s not enough for us.

We’re not the biggest fan of tickets and always prefer VPNs having a live chat feature. 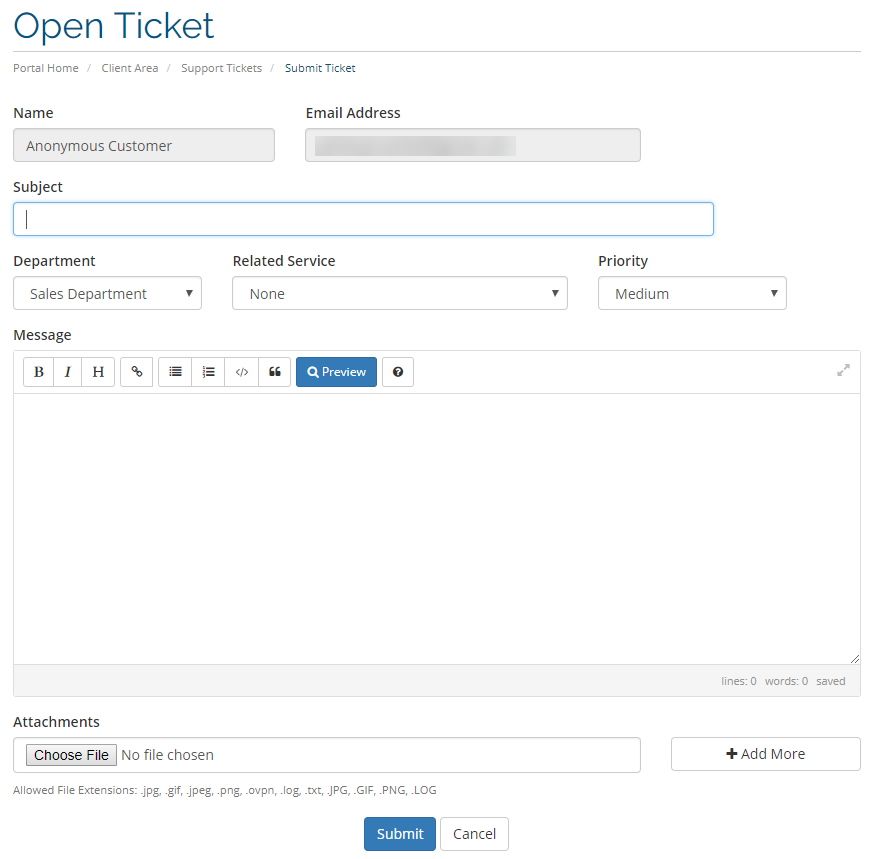 While that is true, we appreciate the fact that VPN.ht replied within the expected 24-hour window.

We have had experiences with VPN providers not responding to tickets at all, so despite the support method being somewhat outdated (chatbots, anyone?), it is still acceptable.

Even the two cons we have aren’t terribly bad. It seems VPN.ht just enjoy being great at everything!

Kill Switch: Not on Windows (Yet)

We tried VPN.Ht on both our mobile device and on a Windows PC.

It was quite unusual to find that the windows version does not have it, while the mobile app does!

A kill switch is a strong requirement. C’mon VPN.ht, get on it!

It’s a little disappointing to see that there are just exactly 7 FAQs. 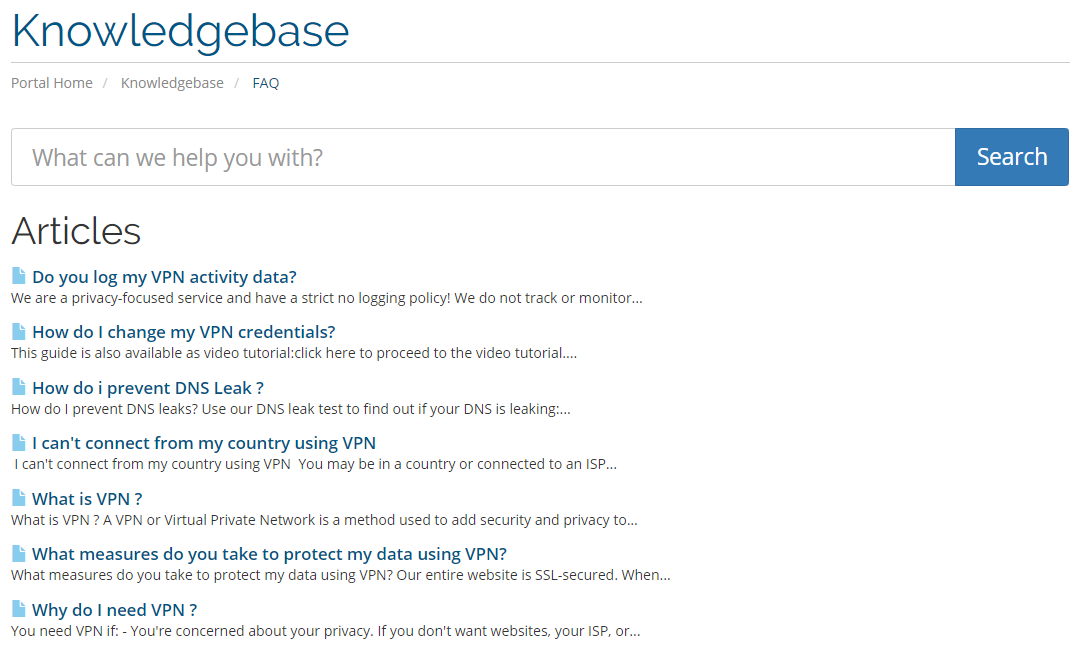 Most VPN providers invest a lot of effort in building their help-center, especially those without live chat support.

The only comprehensive section was the setup guides – maybe they expect people to not run into issues with their service?

For what it’s worth, the FAQs, however few there are, are well-written and easy to follow.

VPN.ht is a newcomer in the VPN industry; they’ve only been around since 2015.

It is also worth noting that VPN.ht, before being available to the mass market, was Popcorn Time’s built-in VPN.

This shows just how inclined VPN.ht is to torrenting safety; we don’t condone their stance or history on questionable activities, but you can’t argue that their services are clearly effective.

While Hong Kong functions as a special administrative region, it’s hard to say that it’s independent of China.

Hong Kong still abides by Chinese rules, despite being allowed to operate in a capacity that is comparable to a sovereign state.

Censorship in Hong Kong isn’t as hardcore as it is in mainland China, but don’t mistake that for complete freedom – China is one of the most notorious censorship-loving countries, so expect at least some influence there.

No one knows how much the Chinese government snoops into Hong Kong’s activities, so it’s best to err on the side of caution.

Fortunately, VPN.ht isn’t known to keep logs, so consider their service relatively safe. On top of that, their warrant canary page looks to be quite hefty in detail.

VPN.ht really is a solid performer. The strict no logs policy pleased us, along with industry-standard security features and strong speeds. The torrenting and streaming features are also amazing.

If they added more servers and threw a kill-switch in there somewhere, VPN.ht would start reaching the tippy-top of our recommendation list.

In summary, VPN.ht is a VPN that you can try if you want to bet on a cheap VPN that does a lot of things.

But if you don’t want to settle on features or price, check out our GoBestVPN Top 10 VPN List. You will surely find better and cheaper alteratives.

Things to consider:
- No kill switch on Windows
- We'd like to see more servers
- The knowledgebase could be better