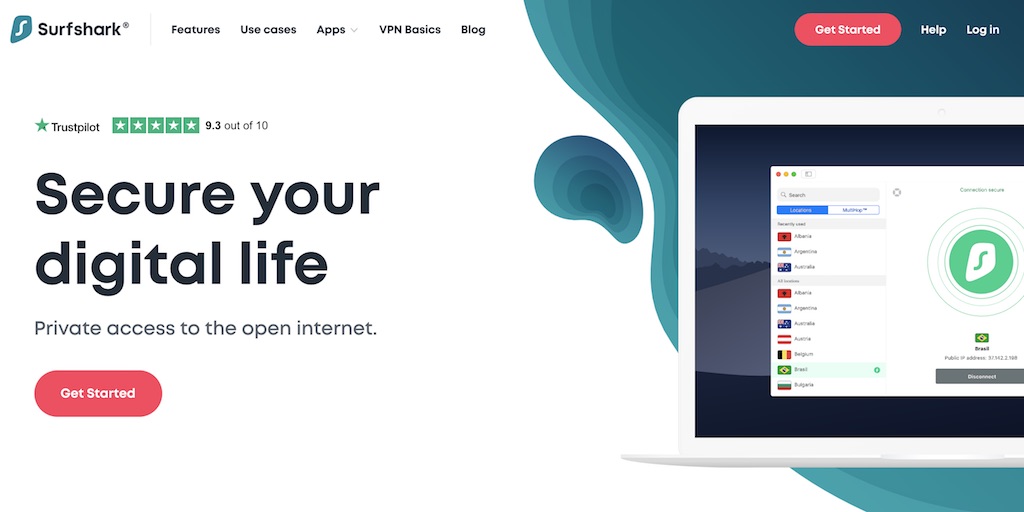 A new player in the game. Surfshark promises many advanced features that premium VPN providers offer.

For example, they use Double VPN like NordVPN, which makes their connections more secure through double encryption.

And like ExpressVPN, they use zero-knowledge DNS. This means they run a private DNS for every server, leaving little room for security breaches.

So now that we know Surfshark offers features only included in top-of-the-market VPNs, let’s see how the rest of it measure up.

Want a little preview? They’re definitely showing a ton of promise in being the best VPN.

Server and Locations: 800+ servers in 50 countries 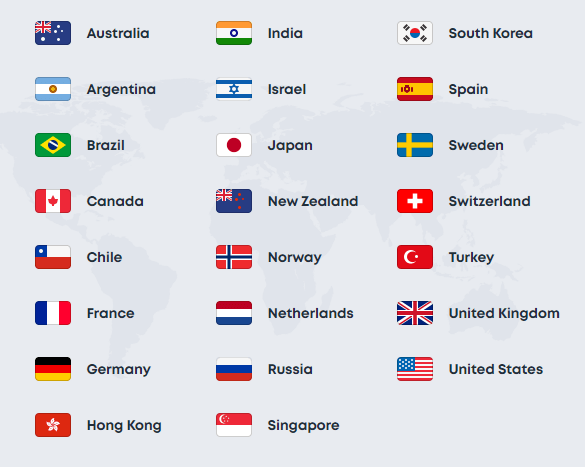 Surfshark provides a ton of servers to choose from—800+ servers in 50+ countries. When they first launched they were sitting at around 500 servers, so it’s nice to see a new VPN expanding their services and ramping up efforts. There are multiple servers available in countries like the United States, Belgium, Italy, Poland, and the United Kingdom.

While top-range VPNs offer thousands of servers, 50 countries is an impressive size as you won’t be limited to a select few locations.

We expect them to keep expanding the list as they grow. All in all, this is a very promising start.

The black screen of VPN failure was fortunately absent with Surfshark.

Even the best VPNs for Netflix can struggle to keep up with Netflix, so the fact that Surfshark passes this test-even as a new VPN-is a very good sign.

It’s probably also due to Surfshark’s servers being so new that Netflix hasn’t caught on. We’ll keep a closer eye out for this.

In case you’re wondering how the VPN holds up with torrenting, you should know that Surfshark can support torrenting and P2P services. And it seems they even promote such activities by creating such guides shown in the screenshot above.

Users can easily torrent different files securely with the help of Surfshark’s excellent encryption and CleanWeb feature that protects your computer from malware.

The only downside is that we didn’t get great speeds with Surfshark, which sadly places them out of our top picks for VPNs to torrent with.

Bandwidth is also unlimited with their plans. Surfshark users don’t have to worry about maxing out on data use.

Considering all the features you get with Surfshark, the long-term subscriptions are very appealing. $47.76 doesn’t seem so bad for two years of VPN service.

Surfshark provides a 30-day money-back guarantee for unsatisfied users to get their money back.

Of course, you cannot break their Terms of Service during this time. All you need to do is contact them via live chat or email. 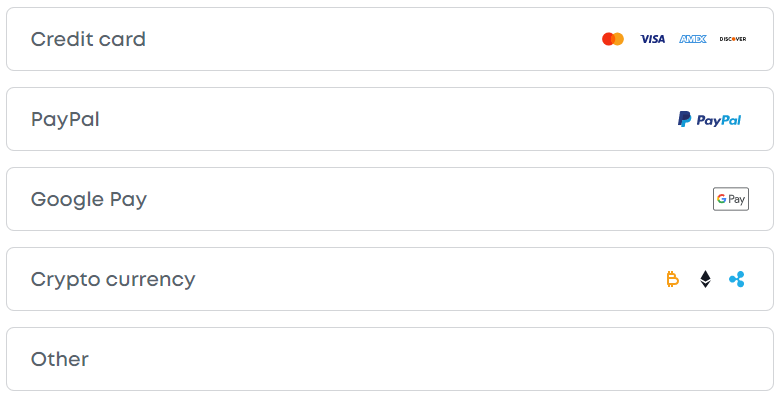 Another thing that has changed since launch is payment methods. You used to be able to pay with Alipay, Dragonpay, and Tenpay (aimed mostly at Chinese customers) but they’ve since removed these options. We’re guessing it’s because the Chinese government is cracking down on VPNs.

At the time of this update, you are able to pay for Surfshark in a variety of ways including PayPal, credit cards, cryptocurrencies, and Google Pay.

When Surfshark first launched, the sign-up process was a bit messy. They had different offers for different devices; for instance, a 7-day free trial for some devices. But as time went on, they’ve “normalized” the process and now you can just sign up like how you would with any other VPN service.

After clicking the Sign-Up button, you will be redirected to their payment page:

They do not collect personal information, but as usual, the payment processors will collect your data.

Surfshark is compatible with most devices and offers native clients for Windows, macOS, iOS, Linux, Amazon Fire TV, and Apple TV. Browser extensions are available for Chrome and Firefox.

That’s a solid range of devices, and depending on the platform you choose, Surfshark also offers a 7-day free trial.

Oh, and let us remind you again: there’s no limitation on the number of devices you can use simultaneously with any of their plans.

The interface of the VPN is very clean and simple. Connecting to a server is as easy as hitting a button on the main screen. 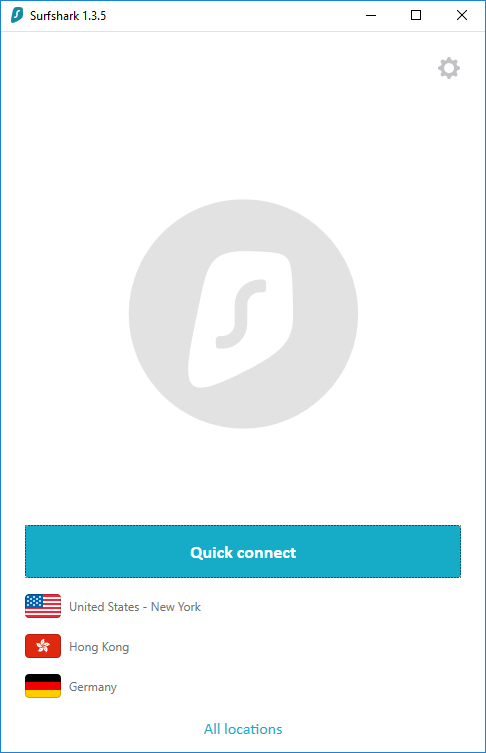 Once the app loads, you can quickly turn the VPN on and let it choose the best server, or you can choose one yourself. You’ll also see your recently used servers so that you can quickly connect to your preferred servers.

Accessing different settings is easy because it’s neatly organized in their settings page. There are convenient buttons for changing your password, contacting support, and renewing your account without leaving the app. 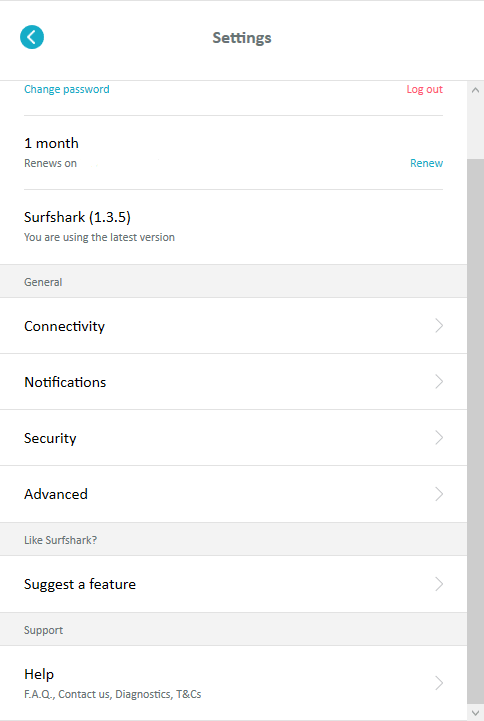 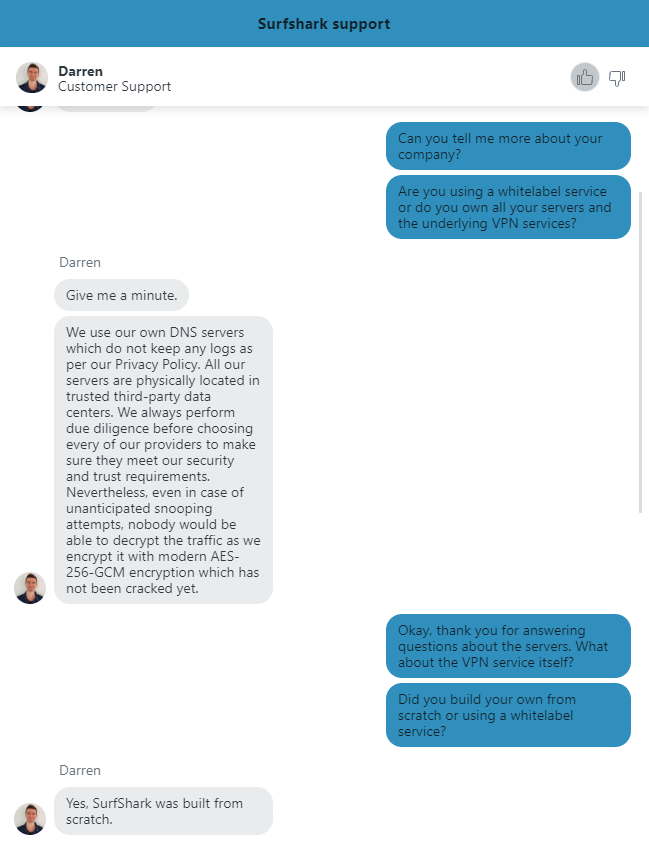 Surfshark deserves an A+ when it comes to customer support. They have a 24/7 live-chat powered by Zendesk in addition to email support.

Even though there were 3 people in front of us in the queue, we only had to wait a minute or two for the support agent to greet us.

All-in-all, we feel that Surfshark’s support was top-tier.

Product Documentation: Another A+

Surfshark has a help center that contains guides and FAQs for various topics ranging from technical to billing issues.

Their blog is also a well-designed and informative place for any VPN or privacy-related topic.

They only collect a user’s email, password, billing information, and order history. The tracking stops there. If you use cryptocurrency to pay for their service and use a fake email address, it’s possible to stay completely anonymous.

Users should be aware that this service is relatively new and its promises untested by users nor authorities. It’s definitely something to keep in mind.

All of the good features of Surfshark would be useless if we found out it fails to hide our IP address and DNS information.

But with their zero-knowledge DNS and double VPN features, we weren’t too worried.

We’re happy to report that Surfshark has successfully hidden our IP and DNS. Their promise of secure and anonymous connections is well kept.

Surfshark uses AES 256-GCM military-grade encryption to encrypt transmitted data. As the support agent pointed out, this encryption “has not been cracked yet.”

It supports two protocols, OpenVPN (UDP and TCP) and IKEv2. 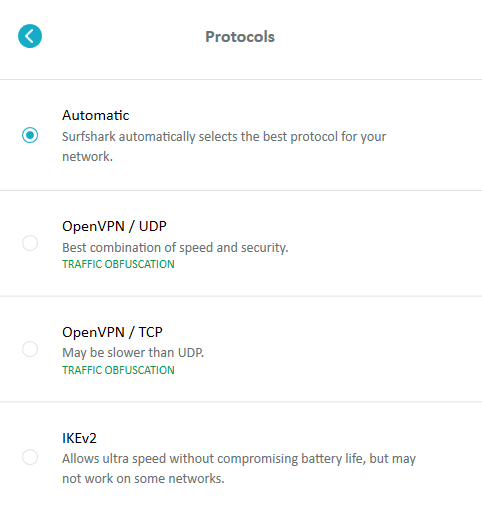 You can easily switch between protocols by choosing which protocol to use by going to Advanced Settings -> Protocols.

Kill Switch: You bet there’s one! 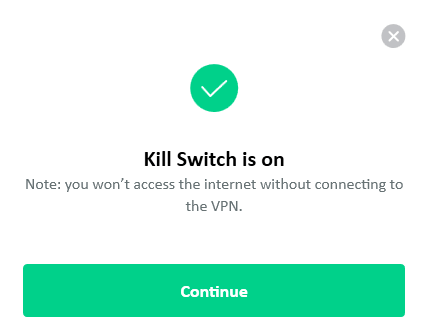 An important feature of a VPN is a kill switch. A lot of VPN services in the market lack one but thankfully, Surfshark isn’t like those VPNs. Surfshark has a kill switch and you have the option to turn it on or off.

For extra security, when the kill switch is on, you won’t be able to access the internet without the VPN. So if you’re a little bit forgetful, Surfshark has your back.

How did a brand new VPN company afford to pay for a security audit by one of the leading cybersecurity firms? We don’t know, but they’ve done it.

Surfshark is new to the VPN game but they certainly seem to know how to play the game. They’ve been audited by Cure53 and even received a satisfactory result.

Although the audit was only for the browser extensions, this is a great start. We hope one day we can see a full infrastructure and policy audit.

Surfshark’s promised ultra-fast speed wasn’t really that fast. It was just okay; speed losses were somewhere around 40% which isn’t terrible. As one user said, “speeds were not slow or fast, just right in the middle.”

4k videos on YouTube took a few seconds to load but there were no issues with streaming content. Downloading images and loading pages wasn’t extraordinarily fast so we’d like to see Surfshark live up to their promise of “ultra-fast.”

It’s quite normal for a business in this industry to stay behind the curtains. Often times, you won’t even know who is running the company nor find any employees on sites like LinkedIn.

While we are indifferent about this because VPNs are supposed to keep you anonymous (and what would be the point in publicizing your company staff?), we still don’t know much about Surfshark. What are their views on privacy matters? Are they active in the community? How are they combating censorship? VPN uptime and track record?

We do know they came out of the water in Q2 2018, boasting a fancy website and what seemed to be an almost-perfect VPN.

They’ve been progressively updating their services and this shows great promise.

However, it is simply too early to tell.

Surfshark VPN as a Business

Surfshark, Ltd. entered the market in April 2018. Not much is known about the creators of Surfshark. All we know is that they are based in the British Virgin Islands and provide one good VPN. They seem to be posting regular updates on Facebook and Twitter but their Instagram account seems to be dead in the water.

Surfshark, Ltd. is registered in the British Virgin Islands, which are not a part of the 14 Eyes Alliance. They don’t have laws that require companies to keep track of user data.

Surfshark has a warrant canary that guarantees a no logs policy and promises not to give up user information to the government.

This VPN is something that shows a lot of promise.

It has most of the features you could possibly need in a VPN. It checks all the boxes for being Netflix-friendly, torrenting-friendly, and also carries a kill switch. It’s in a privacy-friendly jurisdiction, has a warrant canary, and features extra security with double VPN encryption and private DNS on all their servers. Oh, and you can use it on unlimited devices.

Sure, it could improve its list of servers and work on getting those ultra-fast speeds, but they seem to be on the right track towards becoming one of the best VPN services available in the market.

The biggest and only con is, at the moment, it’s a little too early to tell whether they are dependable in the long-run. The business is still fairly new and there hasn’t been any serious testing done on Surfshark.