Today, we’re going to take a look at Newshosting, something that’s a little more than just a VPN service.

Newshosting is a Usenet service that was established in 1999. In almost two decades, Newshosting has grown to be one of the most popular Usenet providers that offers strong features and functionality across the board.

Usenet is a worldwide distributed discussions system developed back in 1980 that facilitates the distribution of user-submitted messages across a worldwide server network.

Although Newshosting is more than just a VPN, it is their VPN service that we’re going to be looking at in this review.

Newshosting VPN is off to a rocky start because we couldn’t really pinpoint a single “pro” about it.

Just take a look at ExpressVPN – they’ve got a massive Pros section. That’s the difference between a premium VPN and a bottom-tier VPN.

VPN Speed and Performance: To be updated

We used the username and password (emailed to us!!—passwords should NEVER be emailed in plaintext) but we just got an “Incorrect username or password” error. 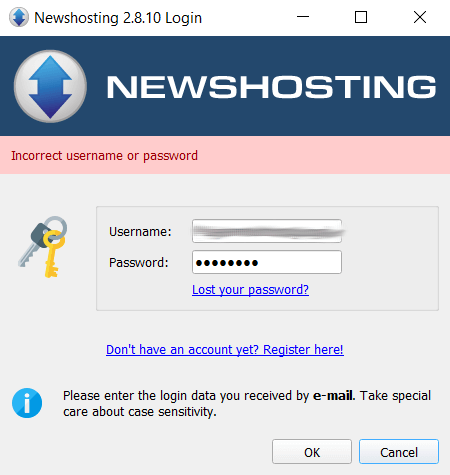 After filling out a support ticket, we were met with this screen. We tried three times to no avail.

In addition to this, we signed up to their “free trial” but were billed for the service anyway. Their site promises 14 days free or 30GB before being billed, but this was not the case.

We will return to Newshosting in the future and try again. They may indeed be experiencing technical difficulties.

Netflix Test: To be continued…

With Netflix cracking down harder than ever on VPN services that are able to bypass their geo-blocking attempts, it’s getting harder and harder to find a VPN that consistently has servers that haven’t been caught out by Netflix.

If and when we get a chance to properly test out Newshosting, we will update this section.

Until then, we daresay you will be much better off with these top VPNs for unblocking Netflix.

However, if you’re a regular torrenter, we know that answer will not satisfy you. So here are some torrent-friendly VPNs that offer full support and dedicated P2P servers.

“If you are less than 100% satisfied with the VPN service, we will gladly refund your payment if the refund is requested within seven (7) days from the date of the purchase. Requests made later than the 7 day purchase date will not be honored.”

Just make sure to request the refund within the first 7 days of purchase to get your money back.

Product Interface: We’ll see about that

We were unable to test out the Newshosting VPN product interface because we could not sign in with the provided credentials. A ticket was raised with Newshosting VPN customer support and we are currently awaiting a reply from them.

Product Documentation: You’ll find what you need (but not more) 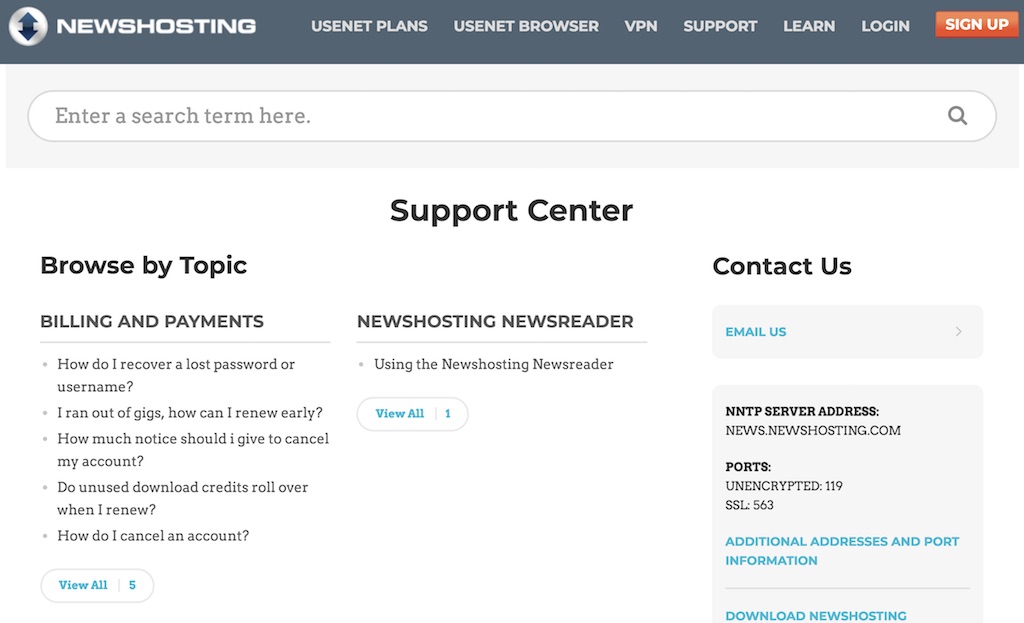 Newshosting has a decent support center with detailed guides on how to set up the VPN, as well as other general articles and FAQs. It’s easy to navigate and gets the job done.

Encryption and Protocols: You can choose between three

Newshosting supports several different options when it comes to protocols. All of these are coupled with AES-256 Encryption, the strongest available that’s used by governments and militaries around the world. The three tunneling protocols supported are:

Which one you use, however, is down to you.

Servers and Locations: Only 70?

Newshosting’s VPN boasts an impressive number of servers – 70 servers in 19 countries – spread across a variety of locations.

This was unexpected since they’ve been around for almost 20 years now. In two decades they’ve only built up their network in 19 countries?

Pricing & Plans: Only worth it if you want more than the VPN

Because Newshosting is not just a VPN service, they have different plans and “tiers.” Though all tiers seem to include their “Zero Log VPN,” we decided to test out their XL Powerpack at $15.83 per month when billed annually. 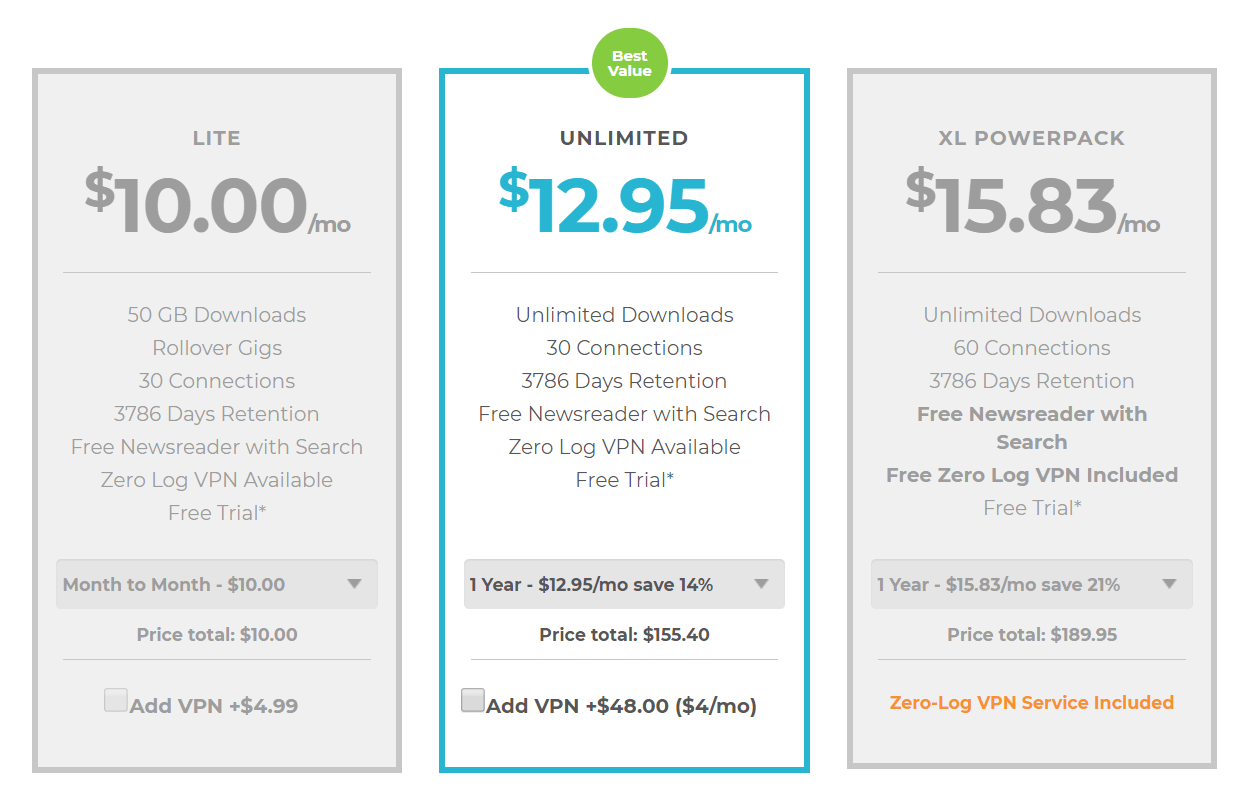 So far as VPN services go, this is by far one of the more expensive ones on offer. Clearly, you’ll need to make use of their other services to make it worthwhile.

The monthly Lite plan is $10, which is comparable to other VPN services like NordVPN, but if you use more than just the VPN, you’ll get a lot more value out of it.

If you’re simply looking for a VPN service alone, we would not recommend Newshosting based on price as it doesn’t offer any bulk discounts that would lower your monthly spending.

Want to see what you’d get for your money? Check out their 14-day free trial for 30GB, or whichever expires first.

Payment Methods: No place for Bitcoin

We’re not sure why their refund policy mentions Bitcoin since there’s no option to pay by anything other than credit/debit card or PayPal.

It’s a shame that they don’t offer any payment methods that help shield your identity—this is something that many providers are beginning to do, and we can’t understand why Newshosting doesn’t support it, especially if they’ve gone to the extra lengths of including it in their Terms of Service.

Newshosting only offers native clients for Windows and Mac computers. However, there are basic instructions available for setting up Newshosting on other devices.

Signing up to Newshosting was simple.

We used an email address and password, as was expected. There were no anonymous methods available for signing up to Newshosting as seen with other services such as Mullvad.

This was disappointing, but it’s not a deal-breaker.

The real problem came later when we tried to access the service. We reiterate here again: Newshosting emailed us our password! We were not amused.

Afterward, we tried logging in only to get an “Incorrect username or password” error. We hope this just happened to us this one time, and that normally signing up shouldn’t be that hard.

Although we are still awaiting a response from Newshosting VPN’s customer service team, we did manage to get a response through social media. 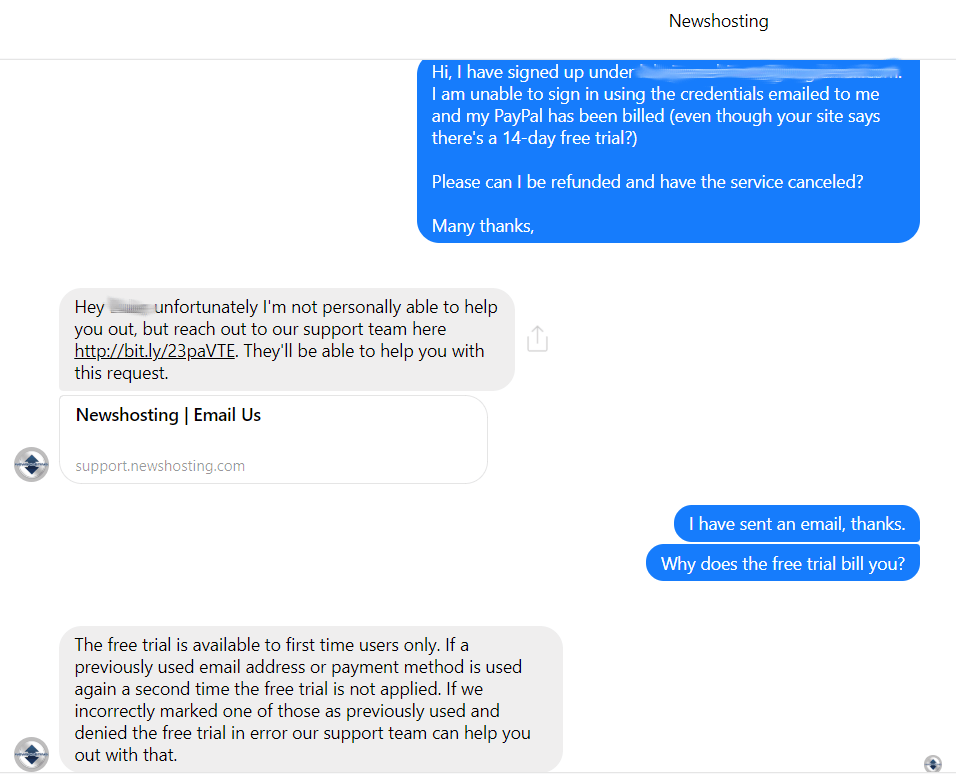 As you can see, we were simply redirected to their customer support page and told to raise a ticket.

It’s strange how such a company cannot provide basic support through their Facebook page. Several companies do now as standard practice and Newshosting needs to sort this out. 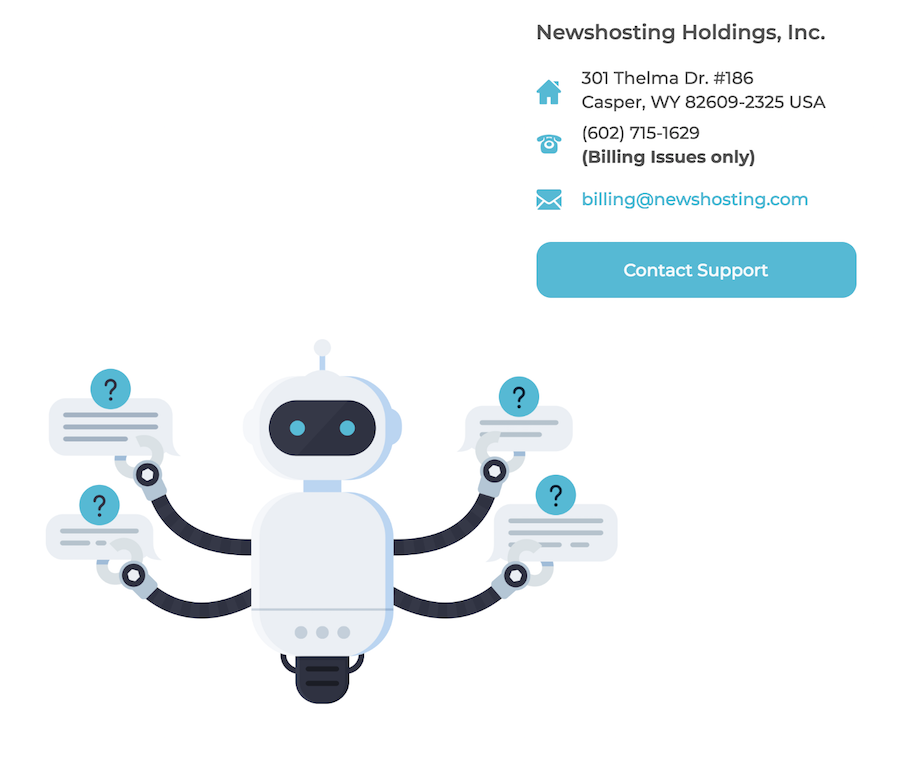 For billing inquiries, they also list a phone number and email address.

Although Newshosting claims that their VPN does not collect logs (see the above picture of their plans page), this is not entirely true. Lots of VPNs claim not to log anything and while it’s somewhat true because they don’t log any personal information, they still take session logs.

This is exactly what Newshosting does. They collect pieces of information such as:

This information could, theoretically, be used by the authorities to determine who has been doing what on the Newshosting service when paired with data from a user’s computer.

Newshosting loses a lot of points as a result of this—we prefer VPNs not to log anything at all.

Their VPN does not offer a kill switch. If you are connected to their VPN and your session suddenly drops, your IP and other information could potentially be seen by your ISP and other third parties.

Newshosting VPN as a Business

Newshosting was founded in 1999 and is a provider of multiple online services, including a VPN. Its main product is the Usenet service, which provides access to over 100,000 newsgroups. The CEO is listed as Thomas S. Miller.

While there’s no doubt that its Usenet service is top of the line, their VPN is lacking in many areas such as privacy.

As you may already know, the U.S. is part of the Five Eyes alliance between countries who share information and intelligence.

This, in addition to their logging of your VPN usage, is enough for us to be quite concerned.

If it actually worked, Newshosting would be OK.

Although Newshosting is lacking in privacy (no kill switch, logging) and is expensive, it could be OK for streaming content and other low-level tasks. There are plenty of servers available across the world and it supports different tunneling protocols.

Now if you’re already a Usenet user and want to use their plan anyway, that extra VPN included in the packs could come in handy… But we would never recommend it for a privacy-conscious user, that’s for sure. For new users wanting to try it out, there’s also the risk of getting charged for no reason.

We will return to Newshosting VPN in the future with the hopes of being able to connect and test out its speed and performance.

For now, though, don’t bother—go with a better service like the ones listed here.

Things to consider:
- Located in the U.S.
- Too much logging
- No kill switch
- No native apps for mobile
- Connection issues
- Bad for privacy
- Expensive