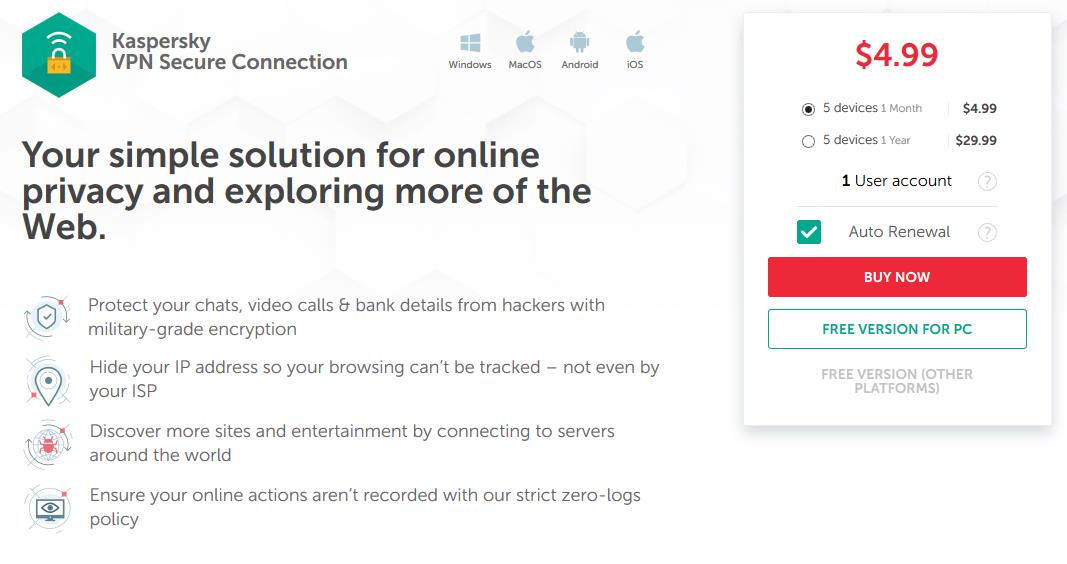 If you have ever been in the market for security software, chances are you’ve heard of Kaspersky.

This Russian cybersecurity provider has made its marks with their award-winning antivirus software.

Their internet security platforms have been used as one of the most popular benchmarks due to its solid performance.

In this review, we look at whether their VPN service lives up to its big brothers. 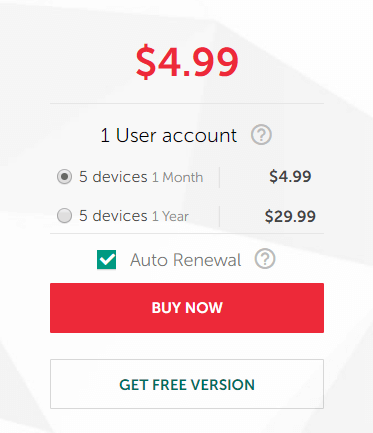 As of now, the only thing we’re raving about Kaspersky Secure Connection is their price.

For as little as $2.50 per month for the annual plan, Kaspersky has a really hard-to-beat pricing model. Users on a really tight budget can also enjoy their free service.

The free version of Kaspersky Secure Connection allows for the same level of privacy and internet security. The free version only allows you to connect to the server geographically closest to you.

On top of that, it only allows for a daily bandwidth limit of 200 MB which is really easy to use up.

The free trial that Kaspersky has allowed users to use never expires, which is a great thing!

They’re not so strict about the purchases either, Kaspersky offers a 30-day money-back guarantee to their subscribers. 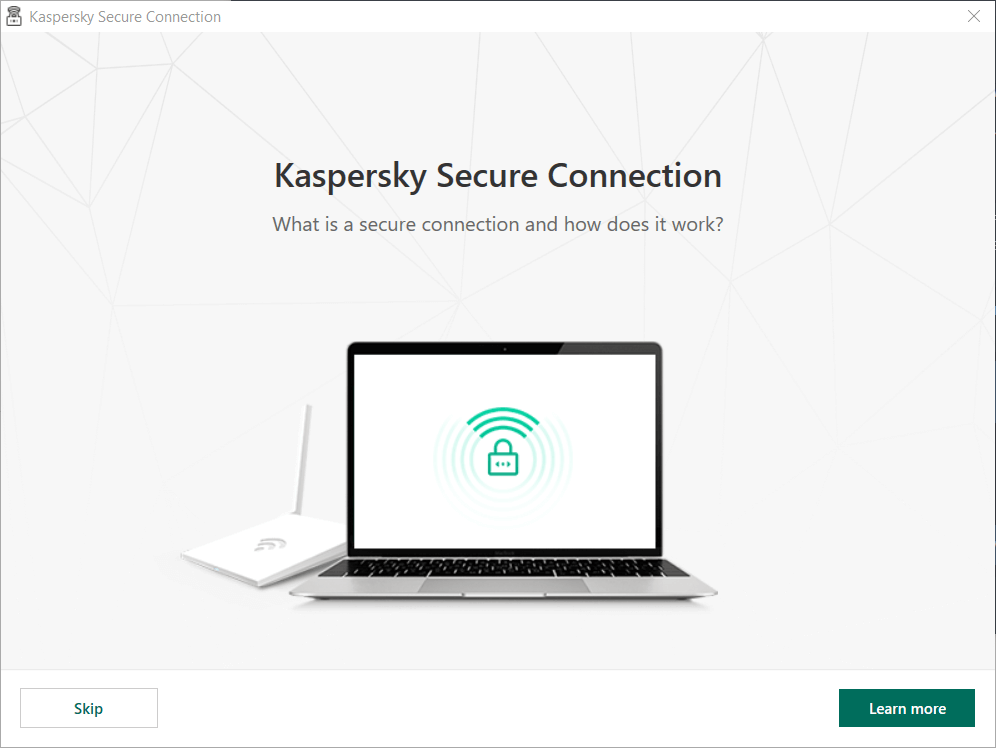 When you launch Kaspersky Secure Connection for the first time, you would be greeted with a start screen.

This includes information on what is a VPN and what a VPN can do for you. 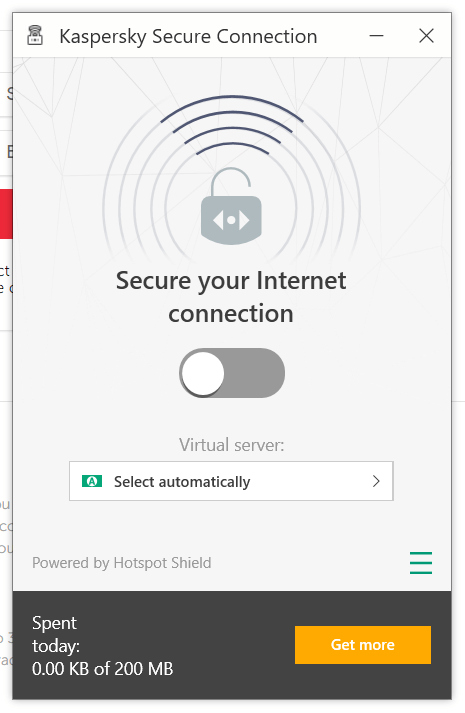 The main user interface is also as simple as it should be.

It shows you a toggle to turn your VPN on, a list of servers and data bandwidth remaining. It’s great to see all of the important information on the main menu itself.

Kaspersky Secure Connection also uses a 1-click connect system which makes it easy to use for literally anyone. Clicking the switch connects you to any server of your choice, although the trial just chooses one for you automatically. Nonetheless, the menus look clean and simple.

If you’ve used any other Kaspersky software before, their VPN’s overall look feels really close to home.

What Kaspersky lacks in human support, they make up for it with a good knowledge resource.

Most of the common concerns that we could think of are well documented on the website.

Moreover, the instructions are also very clear and easy to follow.

This means that the VPN is stable enough to not leak your IP address the whole time you’re connected to their network.

Kaspersky utilizes a 256-Bit AES encryption which is pretty much the standard among VPN providers nowadays.

It’s a hard-rock security option for a VPN since that level of encryption is virtually uncrackable.

That’s unless you give out your cipher keys, which should not be impossible in the Russian setting.

VPN Speed and Performance: Speeds are kind of fast

The speeds we saw with Kaspersky Secure Connection were more than enough for browsing and streaming.

We were not expecting the fast speeds due to their presumably limited servers, yet it seems like Kaspersky has a few tricks under its sleeves.

Kaspersky does neither denies nor confirms that their VPN service allows for torrenting.

They’re also one of the rare VPN providers that do not mention peer-to-peer file transfers at all.

Even though it works, it seems like Kaspersky frowns upon piracy.

Although not explicit, we have full knowledge that this usage restriction points at piracy through torrent downloads.

So if torrent support is what you’re looking for in a VPN, we recommend these torrent-friendly VPNs with dedicated P2P servers. 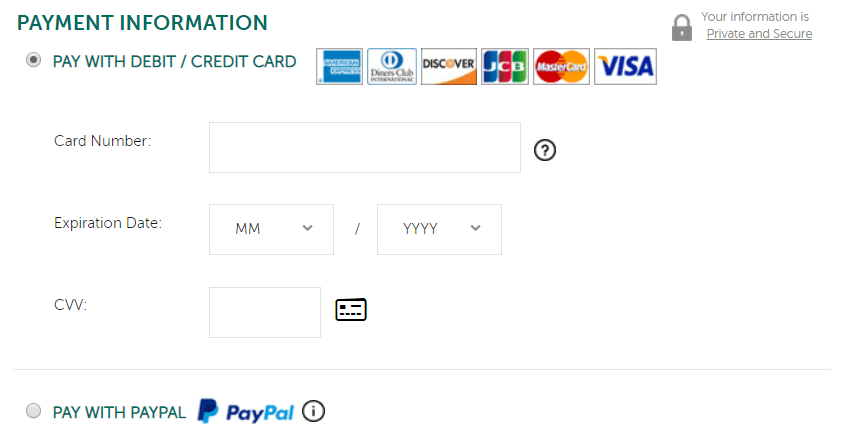 It’s no surprise that there are no cryptocurrency payment options for Kaspersky Secure Connection. Kaspersky is a large company and we all know that large companies tend to move slower with adopting new technology.

Kaspersky only has PayPal and credit cards as payment options for their software subscriptions. No cash, no checks either.

Device Compatibility: Available on most devices but…

Compatibility feels limited as there is no support for a router configuration.

Most VPN providers would cover these basics and at least a Linux configuration.

Router configurations usually allow for more kinds of WiFi-enabled devices to connect to a VPN service.

If you need a VPN for your gaming consoles or even a smart TV, you have no choice but to consider other options.

At the bottom part of the website, you’re given options to either try the service out for an indefinite time or to purchase it outright.

This leads you into different pages, clicking “get free version” leads you to a download page where you can choose your preferred platform.

Kaspersky asks for your location since they are compliant with the EU’s data regulations.

The only downside to this is that connection logs are to be kept as mandated by GDPR.

This is kind of great for no-log VPNs since the GDPR essentially keeps companies accountable if they lie about retaining logs, but this isn’t the case for Kaspersky.

Should you decide to purchase the full version of the software, you would automatically be taken to your cart.

You will then be given a download link for your device after you have successfully completed your transaction. 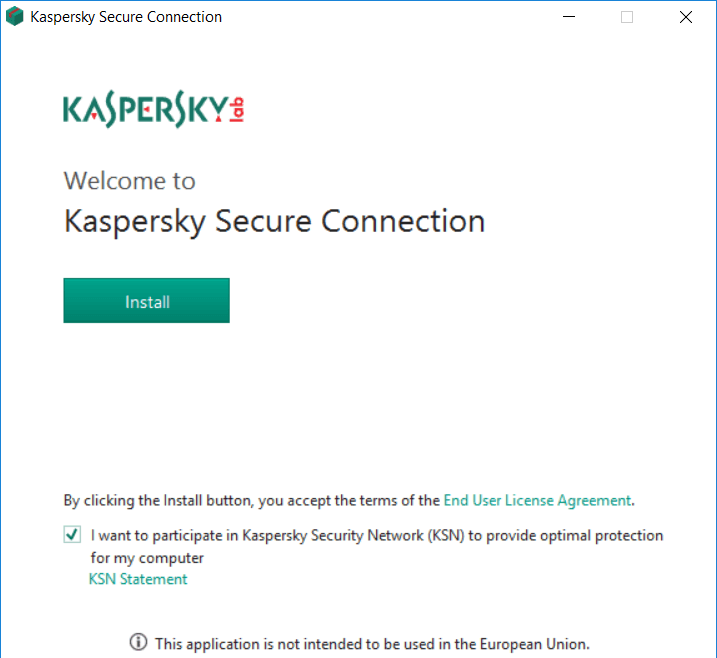 We downloaded a non-EU version which supposedly does not keep any form of logs (presumably due to GDPR).

The installation was very straightforward the first screen just had one button to click. Feel free to uncheck the box for signing up for KSN. We felt it’s too much since this may collect more data from you than needed. 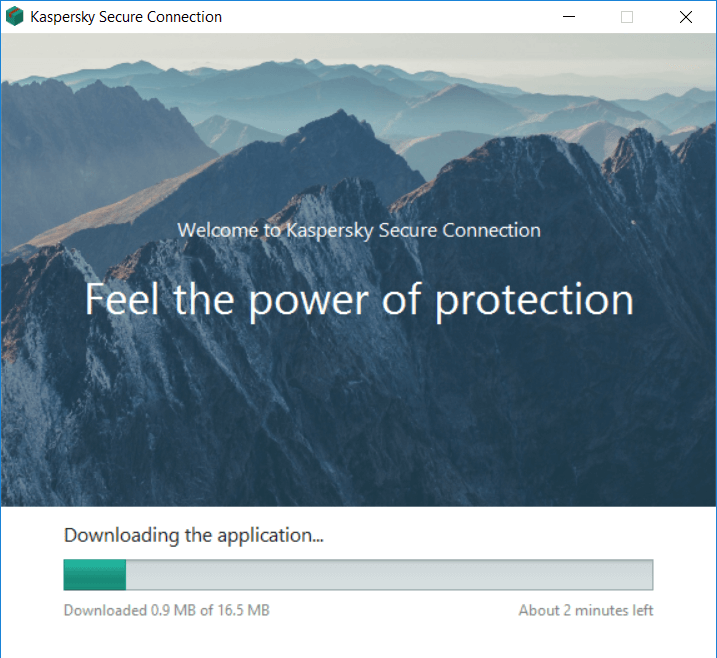 After agreeing to install the software, it goes on to download the essential installation files. 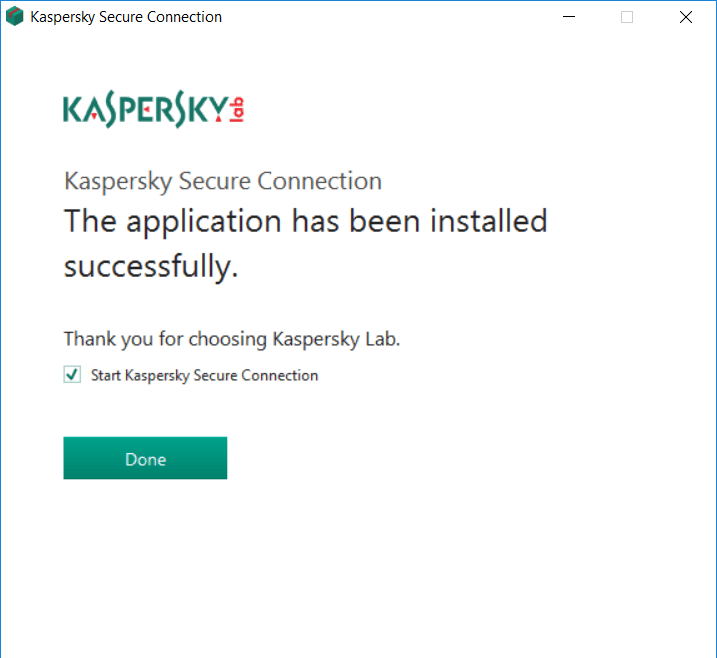 And that’s it! You already have Kaspersky Secure Connection installed on your computer.

Servers and Locations: Unknown, and likely to be few

If you’ve been looking around at different VPNs, you’d most likely see these providers advertising every feature they have on their website. Kaspersky is one of those VPN providers that barely share any information about their service.

We think that Kaspersky is just resting on its laurels and banking on their security reputation. We’ve tried looking for their server count and locations, and they were nowhere to be found on their website.

The closest thing we found was the server list on the app which listed down the countries where they have servers in.

They have listed 18 countries with servers on them. If they only have one server per country, this means Kaspersky has one of the fewest numbers of servers for a VPN provider. 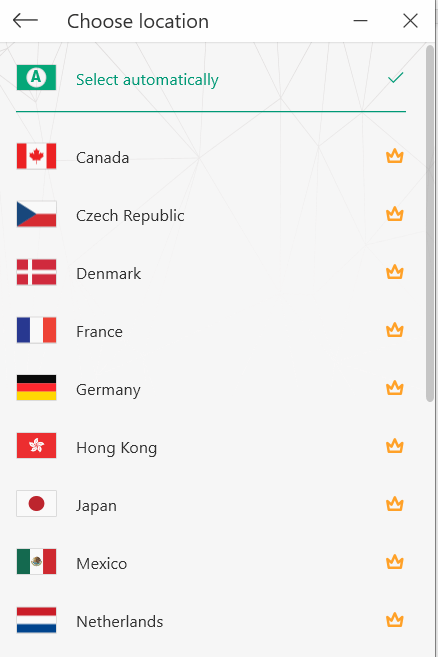 Their 18 servers are mostly spread in the North Americas, Europe, and East Asia; making their reach very limited.

Kaspersky doesn’t claim that their VPN service works with Netflix.

This is most likely to adhere to their own government regulations which give primacy to internet censorship. For the sake of testing, we have tried out their US, UK, and Netherlands servers.

As expected, none of them worked.

It was also quite ironic when we tested the US server on US soil, we still were not able to access Netflix. Netflix has automatically flagged our IP address as a proxy/unblocker.

When it comes to unblocking Netflix, your safest bet is to go with these VPNs that can unblock the site.

It comes off as a surprise that a company at this scale does not offer a solid support solution like live chat or phone hotlines.

They have ticket support where you have to create a My Kaspersky account.

First of all, Kaspersky is GDPR compliant, which means users in the EU are subject to having connection logs.

Second, being based in Russia, Kaspersky is very much vulnerable to the government snooping in on their activities.

Likewise, the Russian government is known to ask for encryption ciphers which render your encryption useless.

Upon reading their terms of usage, we were even more bothered by the fact that Kaspersky is willing to reveal your identity.

If these compromises threaten your existence, we suggest looking at other VPN solutions without a second thought.

Kaspersky Secure Connection does not have a kill switch.

Kill switches are used as a last line of defense, where a connection is shut down when there are potential risks of being exposed.

We’re a bit disappointed that Kaspersky did not utilize this feature for their Secure Connection software.

Kaspersky VPN as a Business 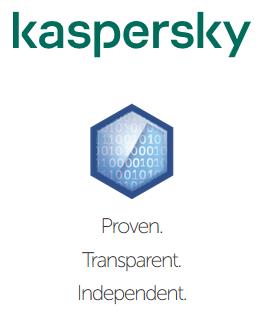 The name Kaspersky has been synonymous to cybersecurity and antivirus programs.

Kaspersky has been a household name for quite a while with 20 years of experience and a user base of over 400 million. According to Kaspersky’s company profile, they have over 3,900 specialists working for Kaspersky Lab. These employees have spread around 35 offices in 31 countries around the world.

Their antivirus software has been awarded numerous times by independent bodies due to its exceptional security and quality.

Russia isn’t a part of any of the 5, 9, or 14-eyes alliances, which on first glance seems like a good thing.

But, the problem with Russia is that they only allow government-approved VPNs. In 2017, Vladimir Putin has signed a bill that bans all anonymizers and VPN services to be used on their soil.

We’re not entirely sure how intrusive Russia’s measures are for approving VPNs, but we do know they’re sticklers for censorship. Likewise, Russia’s moves are designed for them to more easily snoop on their citizens’ online activities.

The only VPN providers that are allowed by the Russian government are those that adhere to their internet censorship laws.

If VPN providers agree to these regulations, they are compelled to give the Russian government cipher keys or encryption backdoors.

We don’t know how compliant Kaspersky is with the Russian laws, but, this definitely raises a few red flags.

Kaspersky VPN Conclusion: They should stick to anti-virus

Prior to trying out Kaspersky Secure Connection ourselves, we’ve already set the bar high because of Kaspersky’s reputation. We already have a few large cybersecurity firms making moves to the VPN market–Avast SecureLine VPN, Bitdefender VPN, and F-Secure Freedome VPN, to name a few.

There’s nothing spectacular about Kaspersky’s features, nothing that sets them miles apart from this tight VPN competition.

The only thing we like about Kaspersky Secure Connection is the very accessible price. We don’t think Kaspersky’s VPN lives up to the laurels of its antivirus brothers.

If Kaspersky can improve on their VPN and retain that price point, it’s going to be a whole different story. The other major red flag is the Russian government involvement in the company. There’s simply too much risk of leaking your identity.

Better go with another VPN without all these negatives. If you want some cool options, check out our top 10 list here.