Judging by its name, EarthVPN has plenty to offer the VPN world and its users.

EarthVPN undoubtedly has servers that will take you around the globe, but how many servers will you use during your subscription? How many are actually usable? All this and more will be answered in our review.

We were able to connect to their US Salt Lake City server to test any possible IP and DNS leaks. 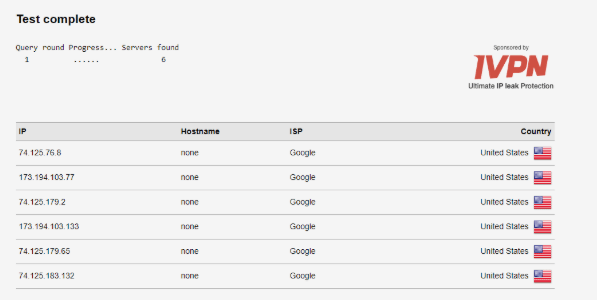 The results were clean. Users have little to worry about as far as security goes. Great news for those looking for reliable protection!

Encryption and Protocols: Nice and secure, just the way you like it

EarthVPN supports four of the commonly used protocols. All of their servers support PPTP, L2TP, SSTP, and OpenVPN. Setup guides for each protocol can be found on their website on the Set Up tab.

Data security will be built up by whatever protocol will best suit the needs of a user.

SSH Tunnel/Socks proxy is also provided by the VPN.

All the above makes for a nicely secure VPN service. If protection is of paramount importance to you, look no further than EarthVPN. They seem to care about strong encryption and the like!

Pricing & Plans: A fair price for a fair service 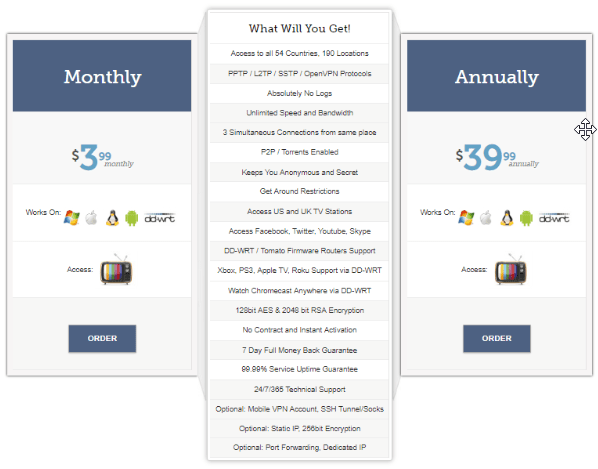 EarthVPN offers decently cheap prices for the service they offer.

A monthly plan costs $3.99 and their yearly plan runs for $39.99, working out to just $3.33 a month. That’s definitely on the cheaper side, so no qualms here! Great pricing by EarthVPN.

Payment Methods: Pay however you want

Think that’ll cover your needs? We think so. They could only do better by accepting gift cards and cash, but they seem to support everything else. Not bad, EarthVPN, not bad!

Device Compatibility: Plenty of devices to choose from

Don’t worry, EarthVPN also fully supports other devices like iPads, smartphones, and routers. So you’ll be free to stream and browse to your heart’s content!

Their plans support up to three devices connected concurrently.

Product Interface: Nothing fancy, but user experience is A+

Once you’ve installed the software, it’ll pop up on your screen as a rectangle with a blue gradient.

The features they offer are all pretty much laid out in front of you. It’s as straightforward as VPNs come, though we do admit their UI is quite dated. Still, we don’t use VPNs for their looks. Everything is a click or two away, which is great.

Users just need to type their credentials in, select servers freely, and tick whatever box they want to activate. EarthVPN’s software can definitely be called user-friendly. Installing it was a breeze and it displays all the features well.

You definitely won’t have to waste time searching for particular settings hidden in clusters of menus; everything is simple and designed to get you online and protected.

Servers and Locations: A decent amount, but we’d like to see more

That’s not a large amount, to be sure. We’ve seen other services offer much more, for very similar prices. We’d like to have seen much more offered in this regard, particularly given their name.

Since the VPN was having trouble connecting to its servers, we ended up settling with the Seattle server instead of the usual New York server.

Overall, some mixed results. Speeds are higher in some areas, though ping to Asia was incredibly high (gamers should look elsewhere for cross-country gaming and similar) but we gained a lot of speed in return.

The overall results show that the European VPN servers performed the best in terms of ping but the speed loss is quite signifcant across North America and Europe. View our final results for yourself:

Refund policy: No free trial, but you have 7 days to decide

To aid the absence of a free trial (something we typically look for in a good VPN), EarthVPN offers a 7-day money-back guarantee to users who haven’t yet decided which service to go for.

Be careful, there have been reports of the VPN being very unresponsive to the point where users miss the 7-day money back guarantee and end up paying for their service.

That’s not a good look and definitely not good customer service. You’ve been warned. If you want to try EarthVPN, know that you may be taking the risk of losing some money.

EarthVPN claims to have offshore servers on 6 continents specially optimized for P2P and torrent traffic. These servers enable users to successfully download torrents using these servers.

However, only one server allows torrenting. It’s the “P2P Torrent Server” found in the server list.

One server is a little barebone for a VPN that claims to offer multiple. A shame, but at least the offer is there. Perhaps we’ll see EarthVPN increase their count soon?

In the meantime, torrenters will have better luck with these VPNs that fully support torrenting (with more than one server!)

To sign up, users need to select a subscription plan. Additional features such as port forwarding, static IP, etc. may also be added to your plan for a fee.

Users need to sign up with their email and set their login credentials (the usual). 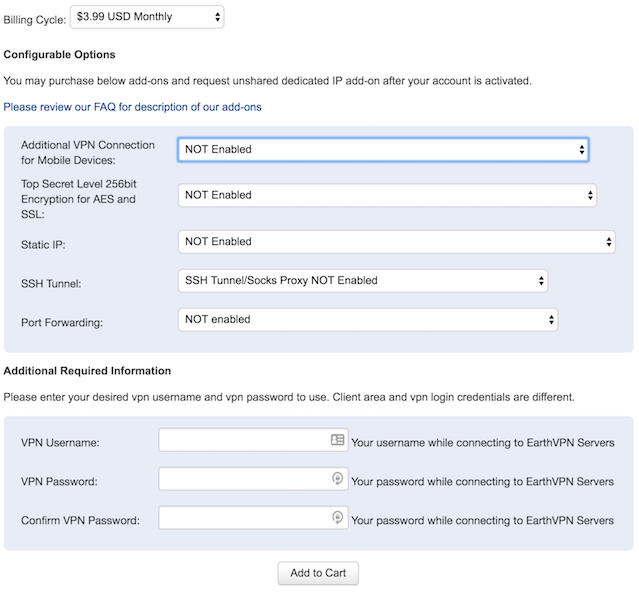 A download link along with the invoice will be sent to the email you provided. Select the download link appropriate for your device and install the file with one simple click. 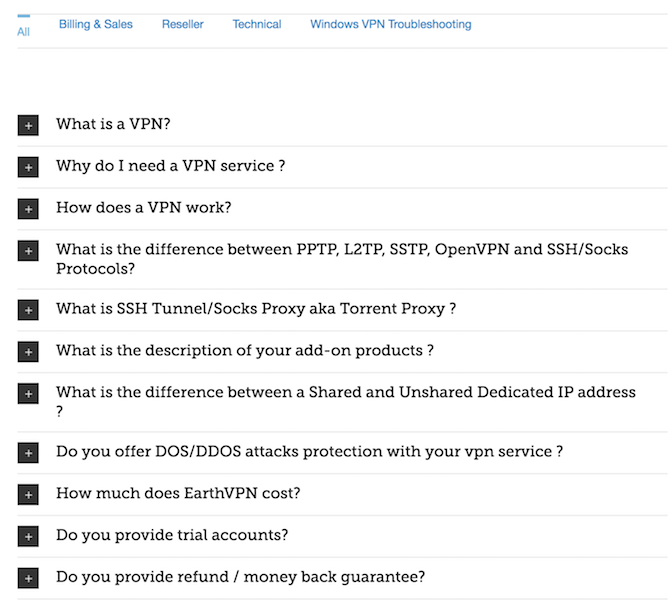 Some of the answers are minimal and not very substantial, but it’s a good start.

EarthVPN has a kill switch. It’s easily accessible in their software.

In theory this is an extremely helpful tool for users who might fear being exposed in the event of a disconnection.

Getting a VPN with a kill switch can be a bit of a hit or miss. With EarthVPN, we’re not sure. We love that they offer a kill switch but the wording on the feature leads us to believe that it’s not really a kill switch. Rather, it completely kills your internet when the VPN is turned off. 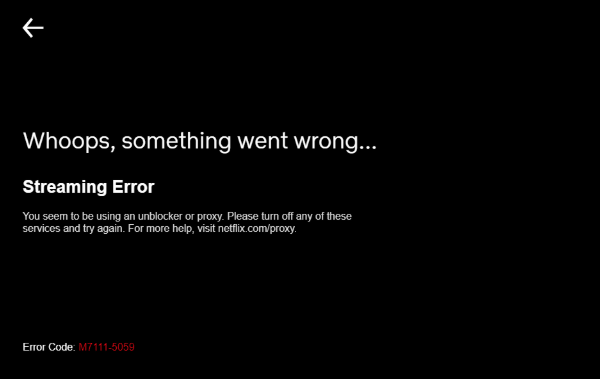 With EarthVPN’s long list of servers and their claims of being able to get through geo-blocked websites, it’s disappointing that none of the servers we tested worked with Netflix.

We even checked the US servers to see if we could gain access to US Netflix. Alas, the black screen persisted. Looking for a night in on the couch? You won’t find it with EarthVPN, unfortunately.

Instead, look here at the best VPNs that unblock Netflix.

EarthVPN doesn’t have live chat. Instead, they offer 24/7 customer support through email and support tickets 365 days of the year. 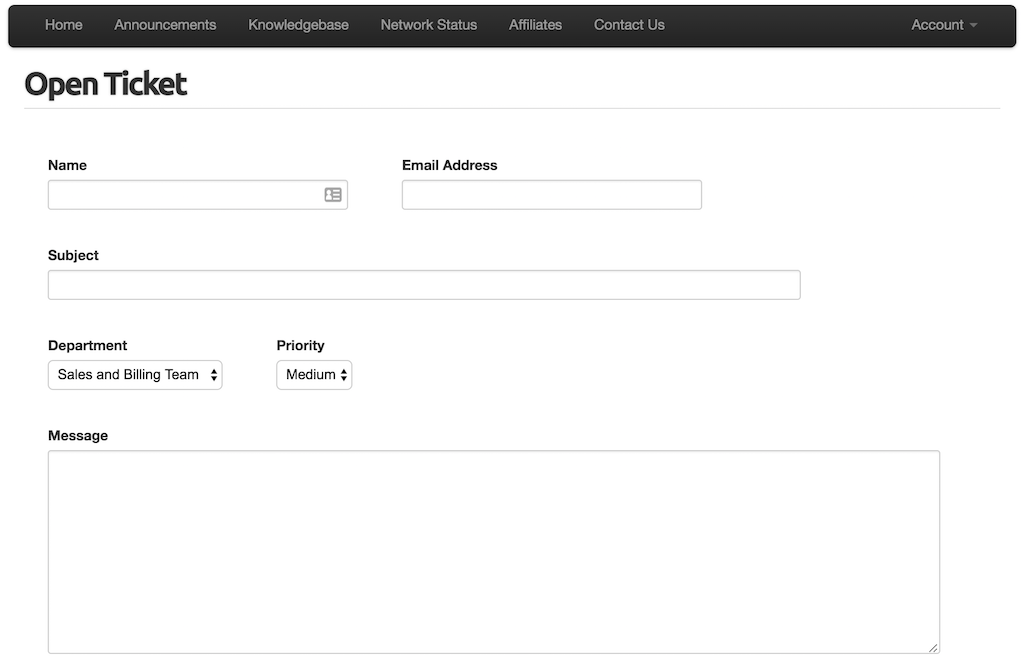 We submitted a ticket to how their response matched up to others, and whether 24/7 customer support was indeed real. It’s been a whole 24 hours and we still haven’t received a reply from them.

Users may also access their remote TeamViewer support if needed.

Their support seems pretty solid on the surface; in our experience, however, that support falls apart as soon as test it. Perhaps your mileage may vary, but our experience left a somewhat sour taste.

According to the Privacy Policy found on their website, EarthVPN collects personal information provided by their users upon transactions, such as first names, usernames, email addresses, passwords, and IP address.

Collected information is used to provide users access to their web-based control panel and software. It can also be used in cases where users forget their login credentials or want to subscribe to newsletters.

Now, this is pretty basic stuff, but why do they need to collect IP addresses is the question that raises a brow of ours. Apparently, the VPN uses user IP address to prevent spam, fraud, and abuse of their services.

Even if third-party service providers such as their payment method partners assist them in securing their site from fraudulent activities, they make sure to do their part as well. These third party services may also employ cookies that can be disabled.

Overall, that’s a lot of questionable data collection. It may not matter to you, or it might. If the idea of your data being collected concerns you, look elsewhere for a VPN for you.

EarthVPN has been in business for quite some time now.

EarthVPN operates their own fiber network in five major cities in Northern Cyprus where they are based. They have been providing MPLS VPN, broadband DSL, Wi-Fi and hotspot internet services for residential consumers since 2012.

The VPN is based in the Turkish Republic of Northern Cyprus.

This means that it is based in a country beyond the 14 Eyes Alliance. It’s also not a known partner of any country within this mass surveillance organization.

EarthVPN might be a good option for people who want an affordable VPN service, but beyond their prices, EarthVPN still has a lot to work on.

It’s nice to know that torrenting is allowed, though only on one of their servers. A lot of protocols are supported by this VPN and users will definitely benefit. Their software is also good and they have a kill switch – some promising inclusions and attention to detail.

While their server location list is impressive, they are severely lacking in overall coverage. They also can’t get through Netflix which is disappointing. Some free VPNs can access Netflix, leaving us wondering why EarthVPN can’t seem to do the same.

There are some big downsides, though. The speed test resulted in a mediocre performance and EarthVPN also logs your IP.

There are VPNs in the same price range with better servers, speeds, and features. Here are just some of them on our top 10 VPN list.

Buy because:
+ Cheap
+ No IP and DNS leaks
+ Allows torrenting