The first thing you’ll find on DroidVPN’s page is this claim: “a simple and easy to use VPN.” Today, we’re going to show you if that’s true or not.

Created specifically for Android and Windows devices, DroidVPN seems to be either working on releasing a Mac version or has already attempted to release one. Either way, we couldn’t download one on their website. More on this later about why we were confused!

They seem to be pretty new, so we were keen to put them to the test through our multi-step process for the DroidVPN client.

We would have tested out their premium service, but PayPal would not process our payment—it looks like their account has been restricted. So, not off to a good start here.

Let’s see how the rest of it goes!

We were shocked to see that DroidVPN emailed us our password when we signed up for the service.

Um… excuse me? This is something that hasn’t been acceptable for years now and proves that DroidVPN saves your user data in an unencrypted database. If they can email you your plain text password, they and anybody else who gains access to the database can see it.

This lapse of security might already have turned off some of you for good. But stick with us for a second and we promise… things get more interesting.

Payment Methods: Look on the bright side, they take Bitcoin!

It took a few tries to figure out how to checkout with DroidVPN. When you click “Purchase,” a white box pops up. If you’re patient enough to wait around for 10 seconds, you’ll see this: 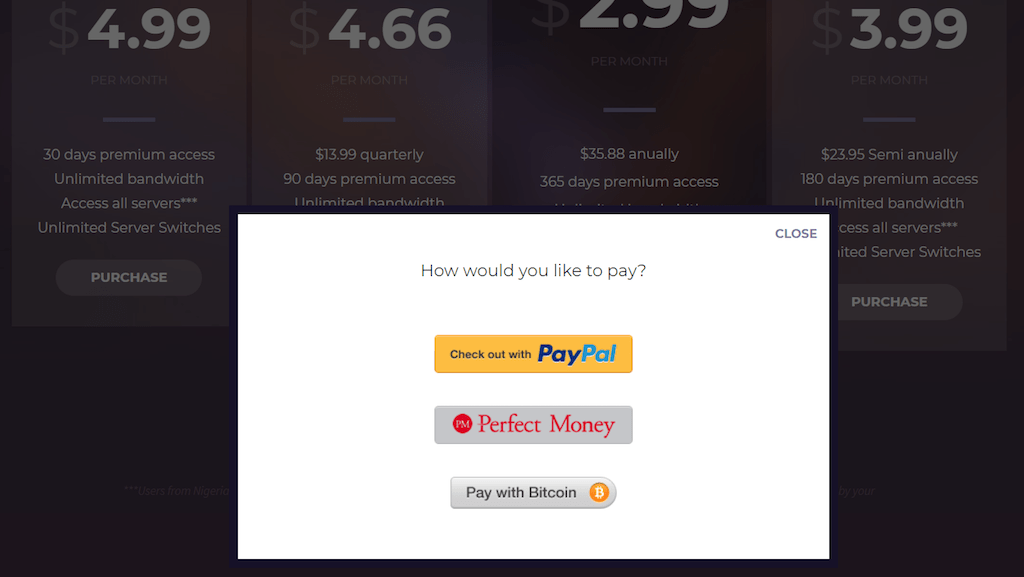 So, we have PayPal, Perfect Money, and Bitcoin. If you use an Android device, you can pay through the Google Play Store.

It’s great that DroidVPN takes Bitcoin payments as this helps with privacy. As you’ll see later though, DroidVPN really fails in terms of privacy. Ironic, right?

Unfortunately, PayPal refused to let us pay them and we don’t have a Perfect Money account. The Perfect Money website itself looks like something thrown together by a high school IT student, so make of that what you will. We certainly wouldn’t trust it.

With DroidVPN’s free service, you’re limited to 8 servers and your data transfer is limited to 200 MB of data per day. Premium plans give you access to any server on the network – although there aren’t that many – and you get unlimited data.

Below is their premium pricing: 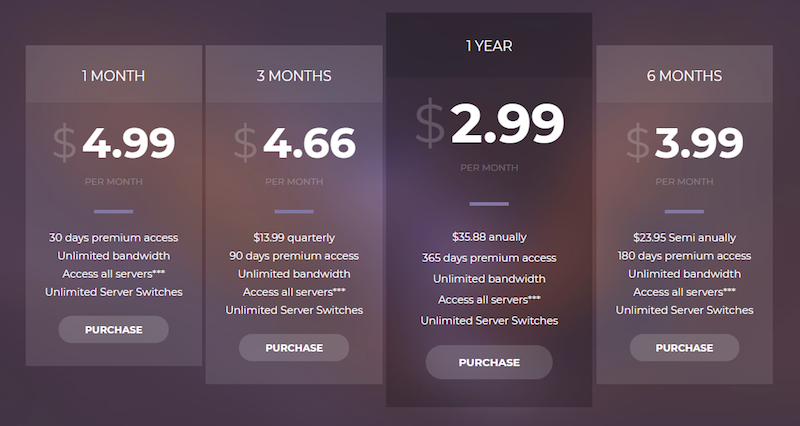 Strictly speaking, these aren’t bad prices. Their month-to-month plan at $4.99 is cheaper than ExpressVPN and NordVPN. That said, you have to question the overall quality the service you’re getting with DroidVPN.

Ask yourself: Is it worth paying a little more for a better VPN? This price isn’t enough to hook us to their service, but if you just want something simple for your Android device, the $35.88 annual price tag is a good deal.

After digging through their website, we found out that torrenting and P2P are allowed on specific servers. These servers are labeled within the DroidVPN app:

This is what their Terms of Service have to say:

Those are some strong words. If you’re planning to torrent with DroidVPN, just make sure you’re connected to a P2P server, or else…

Go with another VPN service that offers full torrenting support.

It’s good to see that DroidVPN has a money-back guarantee. We suspect this is something you’ll want to use if you decide to go ahead and try one of their premium subscriptions.

A note of warning: DroidVPN won’t give you a refund if you’ve used up more than 2GB of data. Other than that, it’s pretty standard. Send in a request within 7 days to get your money back.

DroidVPN doesn’t seem to have a lot of servers, and these can only be viewed via a drop-down list in their primitive and no-frills desktop app.

When we checked it out, we saw a total of 45 servers, out of which, 8 were free. The network is active in 8 countries including Russia, the U.S., the U.K., France, Japan, and Singapore.

VPN Speed and Performance: Sorry, no can do (we couldn’t connect to any of the servers)

Unfortunately, we were unable to test out DroidVPN’s server speeds and overall performance because their Windows app simply doesn’t work. We even tried this on another device in case there was a problem with our computer, but… the problems persisted.

None of the free servers seemed to work at all. We were either told that the server is full or that NETSH failed to set IP. 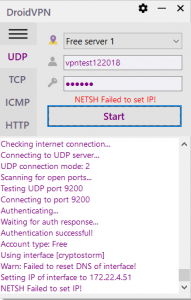 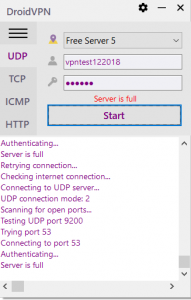 In fact, out of all 8 free servers, 6 of them gave us the NETSH failed to set IP error and 2 told us the servers are supposedly full.

This doesn’t come as much of a surprise—this is a pretty rubbish service and there’s even a notice on their website apologizing for a five-day period of downtime in May:

Netflix Test: We’ll give you one guess (hint: nope)

Judging by the quality of their site and service so far, we seriously doubt that Netflix would work on either their free or premium servers.

Don’t worry, though. We’ve made a list of the best VPNs for Netflix just for this purpose.

Device Compatibility: For Android and Windows users only

As we said above, DroidVPN is only compatible with Android and Windows.

Apparently, the 3.0 version is available for Mac as well, but there’s no download link for Mac on the site whatsoever. 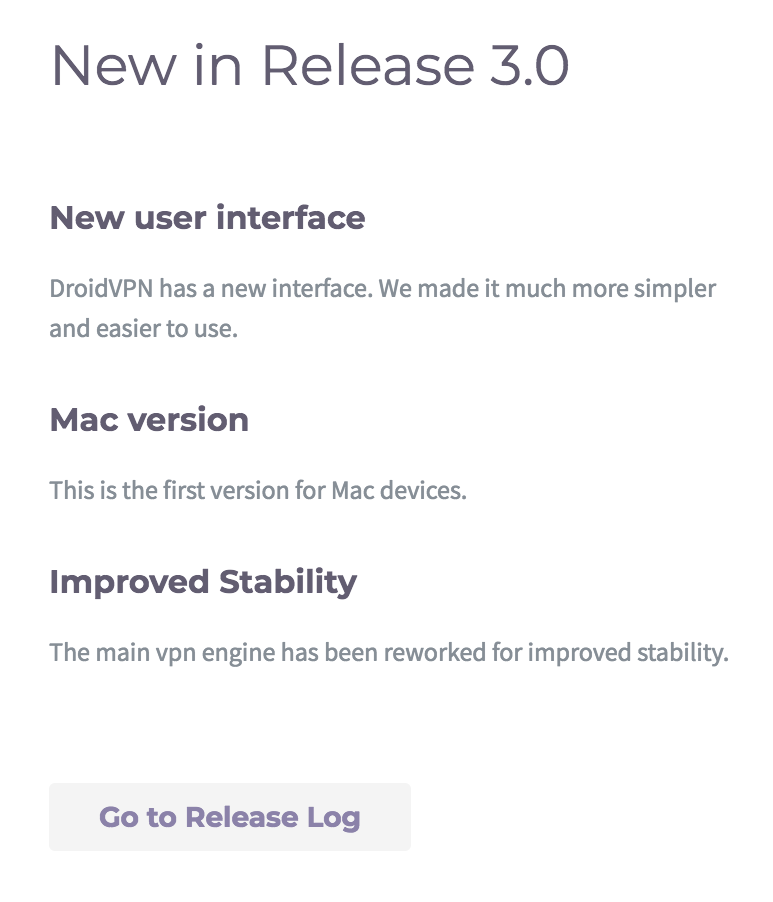 The FAQ section says they’re planning to introduce support for iOS and Linux devices, but this remains to be seen. Seeing as their release log hasn’t been updated for over a year, we doubt you’ll see this anytime soon. We’re serious about things not being updated – their homepage stated that the Mac version will be available in June… of 2018. And it’s still not out!

Signing up was easy enough.

We just hit the button on their website and away we went. They requested a username, email, and password.

After downloading DroidVPN, we were able to access the service by inputting our details after activating the account via email.

But as we’ve mentioned in the site note – in red letters, no less – the verification email contains your password in plain text.

Once again, here’s what we received in our inbox (it bears repeating):

DroidVPN’s Windows app is very simple and primitive. Some people may like this, but personally, we prefer a decent looking app—it shows that the developers care about their product enough to dress it up and make it look good. 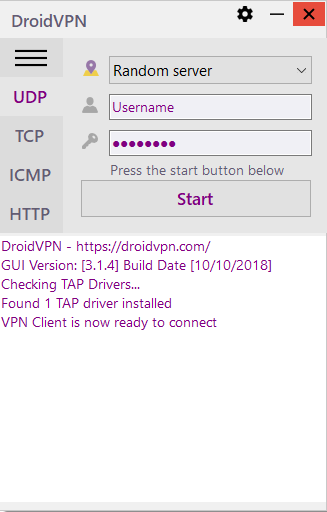 This was not the case with DroidVPN.

You probably aren’t going to be surprised in learning that DroidVPN’s customer support seems less than impressive.

Yep. The bar’s pretty low at this point.

There’s a simple FAQ page. At the bottom of the questions, in tiny letters, you’ll find this:

So, basically, their customer support consists of you sending a message through your email client and hoping for a response.

DroidVPN’s Privacy Policy is pretty short. We recommend looking at it yourself. Actually… we take that back. It’s a confusing, badly-worded document that’ll probably give you a headache.

This won’t let DroidVPN see exactly what you’re doing, but it’s still not good. The best type of logging is no logging at all.

This kind of undermines their friendly attitude towards torrenting, doesn’t it?

Encryption and Protocols: In-house protocol and… what encryption?

DroidVPN provides no information about the encryption methods used in their Windows or Android app.

You can choose which protocol to use—their own DroidVPN protocol over UDP or TCP, ICMP, or HTTP (don’t use this!)—and customize things a little more by hitting the gear icon. 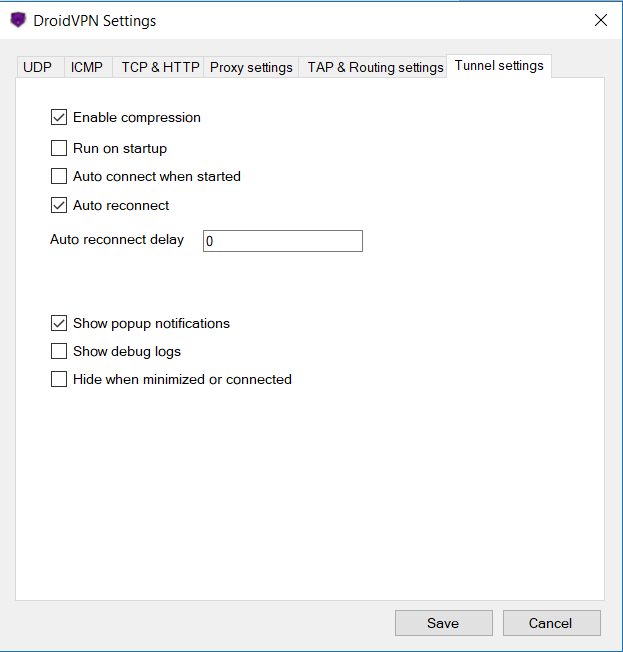 You probably don’t need to worry about any of this though, unless you’re an advanced user.

The lack of information about their in-house tunneling protocol doesn’t sit well with us. How do we know we can trust it? OpenVPN is known and widely used; we know it’s safe. We can’t say the same for DroidVPN’s own protocol.

Kill Switch: There isn’t one… are you surprised?

There is no kill switch included with DroidVPN. Yet another reason to run away!

DroidVPN as a Business

DroidVPN isn’t a big brand by any means.

There’s very little to share about the business (even their official business name is concealed). However, we do know they are most active on Facebook with over 90k likes. They also offer reseller options for authorized parties.

For some reason they’ve decided to add ad banners on their website. It’s probably one of the strangest things we’ve seen on a VPN website.

DroidVPN is located in the Philippines. This falls outside of the 5, 7, or 14-Eyes agreements between Western nations that facilitates the sharing of information and intelligence.

Where do we even start?

If you want the short conclusion, just don’t bother with DroidVPN, especially if you’re on Windows—the client doesn’t work!

Their website is highly lacking and looks like it was thrown together in seconds. They even have ads on the site. There’s a serious lack of information, no knowledge base, no live support, and it’s just plain buggy.

Their Windows client flat out refused to work for us. We couldn’t connect to any free servers and there’s no kill switch. The UI is extremely simple and primitive. We don’t know what encryption is being used, and DroidVPN uses its own undocumented tunneling protocol which could either be amazing or full of security flaws.

Ten guesses as to which one we think it is.

Our PayPal payment could not be processed (their problem!) which means we couldn’t test their premium version. To be honest, we doubt it’s much better than the free one. Remember, they had a service outage that lasted for 5 days in May and this affected premium as well as free users.

Anything’s better — but we recommend these top 10 VPNs for maximum value.