Cryptostorm; an edgy name, focusing on anonymity and privacy. Cryptostorm dubs itself a no-compromise network security tool because it is anonymous and open-source. A VPN for the “truly paranoid.”

Looking at their website, it is easy to see that they think highly of their product and it’s quite the niche product.

Aside from marketing hyperbole, how does Cryptostorm fare as a VPN? Let’s find out.

Cryptostorm 100 percent allow and even endorse torrenting and other P2P activities through their VPN platform. After all, it is open-source and completely anonymous.

This, in addition to the fact that Cryptostorm is highly secure, means that it’s a great option if you want to participate in torrenting or P2P activities… well, it would be if it wasn’t for the very low speeds (more on that in the Cons section).

Looking for VPNs that support torrenting with high speeds? Check out this list.

Cryptostorm has quite a few plans in place. Using your credit or debit card through PayPal, you can either subscribe to the service or make a single order. Single orders can also be purchased with Bitcoin and other cryptocurrencies (altcoins).

They’ve recently added a free option called “Cryptofree.” This lets you use the service for free with capped speeds:

It’s only limitations are bandwidth speeds, which are capped to about 160kbps down, 130kbps up.
Also, it doesn’t include any of the non-essential features such as transparent .onion/.i2p access or port forwarding.
Other than that, it’s setup exactly the same as our paid nodes. Same cryptography, same security features, same no logging policy.

160kbps is pretty horrendous but at least it’s free?

Device Compatibility: All your devices, and then some

Cryptostorm doesn’t disappoint on the device compatibility front; available natively for Windows, Mac, iOS, Linus, and Android, it’s easily installed through a one-click process. Additional configurations are available, but these are quite technical in nature. This is hardly surprising, given the open-source nature of Cryptostorm and the type of user they target.

Cryptostorm can also be installed on suitable routers, too. This means that other devices such as smart home assistants, games consoles, and refrigerators can all be protected. It is also compatible with TOR.

Because Cryptostorm operates on a token-based system, there is no registration process; no personal information is divulged aside from that associated with your PayPal account. If you pay with Bitcoin or any other cryptocurrency, there are no privacy concerns to be had.

As the system is based on tokens, all usage information connected to that token cannot be traced back to an individual. Cryptostorm claims that their tokens are regularly deleted, too. Because some people have annual tokens, we can’t confirm how exactly that works with their token deletion process.

What we think they mean is that once tokens are expired, they will eventually be deleted along with all data associated with it.

For this reason, more privacy-conscious individuals should stick to tokens with a shorter lifespan.

Cryptostorm has openly stated that they don’t keep any logs at all, however, user activity can be monitored by them in real-time. This can be disabled within the app, though.

We recommend reading their full Privacy Policy. There’s nothing we read that gave cause for concern and they’re very transparent with their logging policies; it boils down collecting essentials for platform security, which is deleted after a week or two. Additionally, they use a token system, so nothing personal is collected – they simply run your token against their system to ensure it’s legit, and that’s it.

DNS Leak Test: No leaks to be found!

We ran Cryptostorm through the usual testing websites and found no leaks.

Our real IP address remained hidden and we saw no causes for concern when looking at both DNS and WebRTC leak tests.

Encryption and Protocols: One secure VPN

Cryptostorm uses OpenVPN that works over TLS/SSL. The encryption used is known as ChaCha and although this is not yet widely used or known, it is just as secure as AES-256 with the added bonus of extra speed. It is specifically optimized for use with mobile devices, too. Or so they say.

For these reasons, Cryptostorm is very secure.

Cryptostorm’s data is protected further with the availability of a public encryption key system known as ECC. The use of this system is optional for the end-user, along with the type of encryption signature that can be used with it. With ECC, information can only be decrypted with a private key.

Without going into too much detail, ECC uses mathematical functions to decrypt keys and unlock information.

All you need to know that this is an additional optional level of security that really makes Cryptostorm stand out.

Kill Switch: Yep, it’s got one

There is a kill switch available in Cryptostorm that can be toggled under Options and then Security. This should always be enabled; it prevents your real IP address from being exposed should you lose connection to the Cryptostorm service.

Cryptostorm’s refund policy is a little different to some other providers.

You can get a refund if you are dissatisfied with the Cryptostorm service and have used less than 50% of your token’s duration. So, if you bought one month’s access and tried to get a refund the day before it expires, you would be ineligible.

Cryptostorm is not a pretty product.

Starting with their website, it looks like a rushed job; it seems very little attention or time was spent making their website look good, with poor formatting and strange color combinations and backgrounds.

They also don’t seem to have made an effort to make any of the information displayed above understandable. That being said, it’s clear that their product is aimed at more advanced users.

The VPN itself is easy enough to use. When you’ve downloaded it and ran the installation wizard, you’ll be met by this screen: 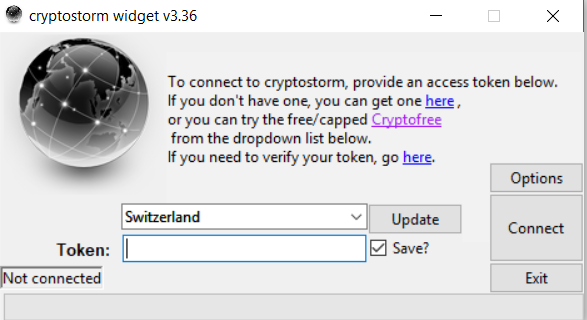 A very basic and no-frills piece of software.

If you are using the Cryptofree version, then you’ll need to open the drop-down list next to ‘Update’ and select Cryptofree. You can then press connect.

If you are using their premium service, then you’ll need to paste in your token and select a country from the drop-down list before hitting connect.

Under Options you will find some self-explanatory start-up options, options for which ports the VPN should use, and security options.

At the time of writing, Cryptostorm offers around 30 servers spread across North America and Europe. This number changes frequently as new servers are added and older servers are removed. There are no servers in areas such as South America and Africa, and only a few locations give you the option to choose between multiple servers.

Compared to other VPN providers, the number of servers and locations is lacking; it’s not good.
The only way you can see a current list of available servers is by downloading Cryptostorm and checking inside the app.

Cryptostorm’s free service, Cryptofree, is capped at 160Kbps down and 120Kbps up. No matter how good your regular download speeds are, you will be capped. Their premium service, however, is uncapped. Let’s take a look at what kind of speeds we are getting.

For a fair comparison, we measured our download speeds prior to connecting to the Cryptostorm service. These were the results:

We then connected to a European server, Switzerland:

We then connected to their US server:

These results aren’t good at all and represent over an 80% decrease in download speeds. If, for example, you had download speeds of 50Mbps and used Cryptostorm, you’d be looking at reductions of 40Mbps or more, resulting in you getting less than 10Mbps.

This is unacceptably slow and completely unsuitable for activities such as Netflix or torrenting.

We tested streaming on a couple different Cryptostorm servers and found that Netflix did not work on any of them. This is unsurprising given that Netflix has been cracking down on VPNs for a couple of years now, and Cryptostorm’s servers have remained unchanged.

When trying to visit Netflix, we were met with the typical error telling us that we are using a VPN.

You’re much better off with the VPNs on this list to bypass Netflix’s proxy blocker.

The only method of support available is email-based and it’s not a ticketing system. There is a forum; however, that doesn’t appear to be of much help to many people. There’s no live chat support or a knowledge base. There is an FAQ section but that isn’t much help, either.

We did send an email and didn’t receive a reply before publishing this review.

Given that this is quite an advanced product, you’d expect there to be some on-site literature. Because it is open-source though, GitHub is quite a valuable resource. Still, newbies beware; you will have trouble looking for answers if you run into problems.

Cryptostorm VPN as a Business

Cryptostorm is quite an interesting business. Its Canada-born creator, Douglas Spink, has been the subject of much controversy due to his private affairs—we will let you look this up for yourself—but this shouldn’t detract from Cryptostorm as a service… Should it?

The company itself is based in Iceland. Although it is not recognized as the go-to place for privacy, they do not participate in any intergovernmental agreements such as Five Eyes.

Cryptostorm VPN Conclusion: Worth a shot if you’re into treading into untested territories

Despite its founder and a few setbacks in terms of speed and product interface, Cryptostorm shows great promise.

If you are privacy-minded, then this should be higher up your list of potential VPNs.

Paying with cryptocurrency, you can benefit from 99.9% uncompromised privacy. Their token-based system means that there is no account that you can be tied to, and OpenVPN combined with ChaCha plus an extra ECC layer if opted for, alongside no leaks and a kill switch, means that you will never run the risk of being exposed.

Price-wise, it is a relatively cheap service.

While it is quite technical and far from being nice to look at, Cryptostorm is a VPN that does its job – a VPN for privacy with tokens.

But for those of you who want a rock-solid service, we recommend the picks on our top 10 list. If you want to pay with crypto, why not give Trust.Zone VPN a look?

Things to consider:
- Questionable founder
- Technical in nature
- Only email-based support
- No Netflix