BulletVPN, a new VPN from Estonia, is promising secure connections with unlimited bandwidth and speeds as fast as a bullet. They let their users enjoy their secure connections by providing five different protocols users can choose from: PPTP, L2TP, OpenVPN, IKEv1, and IKEv2.

Pro Tip: We recommend L2TP as the default protocol to start with as it comes built-in with every Windows and macOS; if possible OpenVPN based on your device and operating system.

Users with different devices can enjoy the services of BulletVPN because one account can be used in three devices simultaneously. It’s available in a wide range of devices, from Windows, Mac, Android, and even Smart TVs and gaming consoles such as Xbox and PlayStation.

The VPN also has a no-log policy, which is a huge plus to users who are looking to be anonymous on the web.

Besides giving users secure connections, it also provides Smart DNS, which can access geo-restricted content in all your devices, be it on your desktop or your Smart TV.

Subscribing to the VPN can be done via PayPal, credit cards or Bitcoin. It costs almost $11 a month and nearly $4 a month for a 1-year subscription. If you ask us, their 1-year plan is pretty affordable.

Still not sure of BulletVPN? They provide a 30-day money-back guarantee, no questions asked or you can continue reading to see if it’s really worth it.

All those things sound fair on paper, but how does BulletVPN actually perform? Let’s find out in this VPN review.

The abundance of servers of BulletVPN doesn’t go to waste when it comes to accessing Netflix. Netflix is available when using BulletVPN, which is a relief as a lot of VPN providers cannot really provide access to Netflix, which leads to empty promises and ruined expectations.

Because BulletVPN is quite new, it’s plausible Netflix hasn’t detected the IPs of the servers. We remain skeptical of long-term performance for this reason.

Don’t say we didn’t warn you!

Getting a VPN for torrenting is really common but it’s also common to encounter VPN services that do not support torrenting and even prohibit users from doing so. Whereas BulletVPN supports torrenting and provides P2P services for fast and secure connections for torrents.

If it weren’t for their slow speeds, BulletVPN could be the perfect VPN for torrenting. They provide secure P2P connections, supports torrenting, and comes with a kill switch. Having a kill switch is really handy not just for users who torrent but also to those who want to remain anonymous on the web at all times.

Navigating BulletVPN is really easy and stress-free because of their simple interface. After signing in to your account in using the VPN client, you will see everything you need to start using their services.

There is a big Connect button in the middle of their client, which can automatically connect you to the best connection available. Choosing a specific server can also be done easily by clicking the button below the Connect button and searching for your preferred server by scrolling down their list or simply typing the server name.

IP and DNS Leak Test: Let’s do this.

We tested three servers: The United States, Hong Kong, and Germany. Any effective VPN should be able to hide your IP and DNS, which is exactly what we tested to see BulletVPN’s effectivity.

The VPN successfully hid our IP address but we found it a bit weird that our IP address led to California when we connected to their New York server. At the end of the day though, what’s important is our original IP address was hidden.

Encryption and Protocols: The more the better.

To provide secure connection and anonymity to users, VPN services must have top-notch encryption and protocols. BulletVPN has 256-bit AES encryption, which is considered to be military-grade.

For their protocol, they provide five different options, PPTP, L2TP, OpenVPN, IKEv1, and IKEv2. Each protocol has their pros and cons but many consider OpenVPN as the most secure. Providing their users with the following protocols is commendable for a VPN service, much more a relatively new one.

BulletVPN provides their users with plenty of servers to choose from. They provide 30 locations such as the United States, New Zealand, Hong Kong, India and many more.

This is good news for users who are looking to access geo-restricted content. Whether it be series, movies or academic materials, BulletVPN provides many options to choose from when it comes to accessing content.

At the same time, 30 locations aren’t really a lot. And we have no server count, either.

They do not just provide one server for one country. Countries such as Germany, the United States, and Canada and many more have more than one server.

Pricing & Plans: A bit of the pricey side.

To be honest, their monthly plan is a bit costly but if you’re ready to invest your time and trust with BulletVPN, it’s best to take the yearly subscription plan.

Payment Methods: Why only three?

BulletVPN has the basic options when it comes to payment, PayPal, credit card and bitcoin. The three options already serve a wide variety of people, which is good considering they’re pretty new to the game.

Obviously having Bitcoin payment is a great plus!

But we still want some additional options like gift cards and cash.

Device Compatibility: They covered pretty much all of them.

As we’ve mentioned before, BulletVPN is available for Windows, Mac, Android, Smart TV, PlayStation, and Xbox users. They accommodate a variety of users, which is great but we would like to see BulletVPN extend their services to Linux users via an app instead of requiring Manual Config.

As a basic VPN requirement, BulletVPN takes user anonymity seriously. In their Terms of Use, there’s a line that states: “There are hundreds of good reasons for being anonymous and we respect them fully.” BulletVPN has gained our trust when we decided to continue reading their terms of service to see if they really keep their no-log policy.

The only information they keep is access attempts to their services and they store it for good reason, for security and troubleshooting. They do not collect sites visited, DNS lookups, emails etc.

Other VPN services should learn from BulletVPN because they do not store any private user information within their systems.

As a VPN that promises no logging, BulletVPN requires little information for an account to be made. All you need to give them is your email, password and billing information when you subscribe to their services. They won’t ask for your name, contact details and other information that you might not want to give.

Speed as fast as a bullet is what BulletVPN promises. Unfortunately, it doesn’t live up to its marketing pitch.

We tested three servers: The United States, Hong Kong, and Germany. Both Hong Kong and Germany servers performed terribly while their United States server was a bit bearable. They did say that their speeds varied from server to server.

We’d like to see faster and more consistent speeds from BulletVPN. It would be a waste of good VPN features if they can’t improve on their speed.

First time VPN users and even long-time VPN users are always looking for free trials before purchasing any VPN, whether it has received good or bad reviews. Thankfully, BulletVPN has a 30-day money-back guarantee, no questions asked.

Customer Support: Live chat would have been nice. 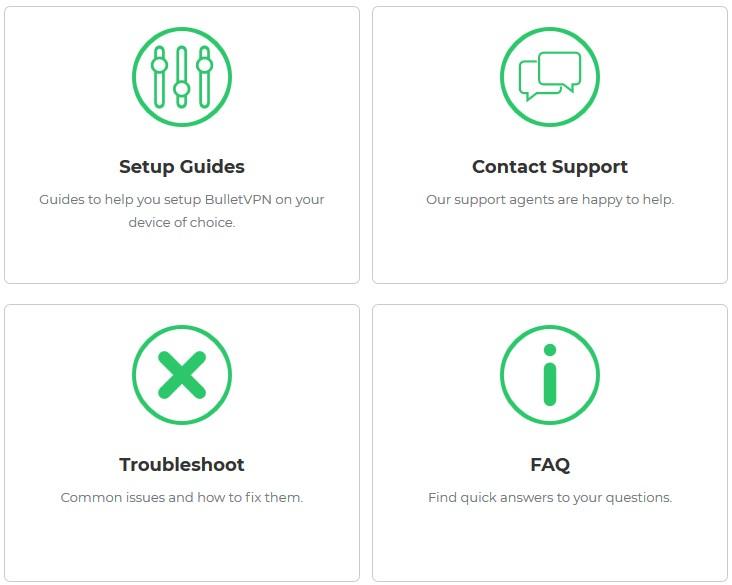 We’ve encountered a slight issue regarding our password and we’re satisfied that their support team replied within a few hours with a solution. BulletVPN doesn’t offer live chat but their support team does a great job with getting back to their customers.

BulletVPN as a Business

The company that created BulletVPN is Nixworks OÜ, a company from Estonia. The country of origin of their company was the only piece of information we could find on the Internet.

Of course, Estonia boasts a transparent business environment. The company is registered under Ali Jawad, aged 37 at the time of writing.

We don’t really know much about them, but what made an impression on us is how they value one’s right to remain anonymous.

Estonia is a country in Northern Europe. Though they are based in Europe and in the EU, they aren’t a part of the 14 Eyes Alliance, which is good news for BulletVPN users.

Besides worrying if a VPN service is under the alliance, information selling is also a concern VPN users have. BulletVPN does have a no-log policy and on top of that, they do not give or sell information to third parties, or so they say.

As a new player in the game, BulletVPN isn’t bad. They provide secure connections by providing various protocols, a kill switch, access to Netflix, and support torrenting while keeping a no-log policy. Those are a few things that even long-time VPNs fail to provide their users.

The catch to BulletVPN is the servers. We’ve experienced their unsatisfactory speeds on some of their servers but there may be some servers that perform better. Their slow speed can let users stream freely but we wouldn’t say it’s the speed of a bullet. The server count is also on the low end of the spectrum.

$3.75 a month for 12 months is a competitive offer. Having one account to connect three devices simultaneously is possible (although we would prefer more), unlimited bandwidth, means unlimited streaming and downloads is also possible with BulletVPN.

However, the company is still relatively unknown and Netflix is a gamble.

For a guaranteed positive experience, we recommend using one from our top 10.