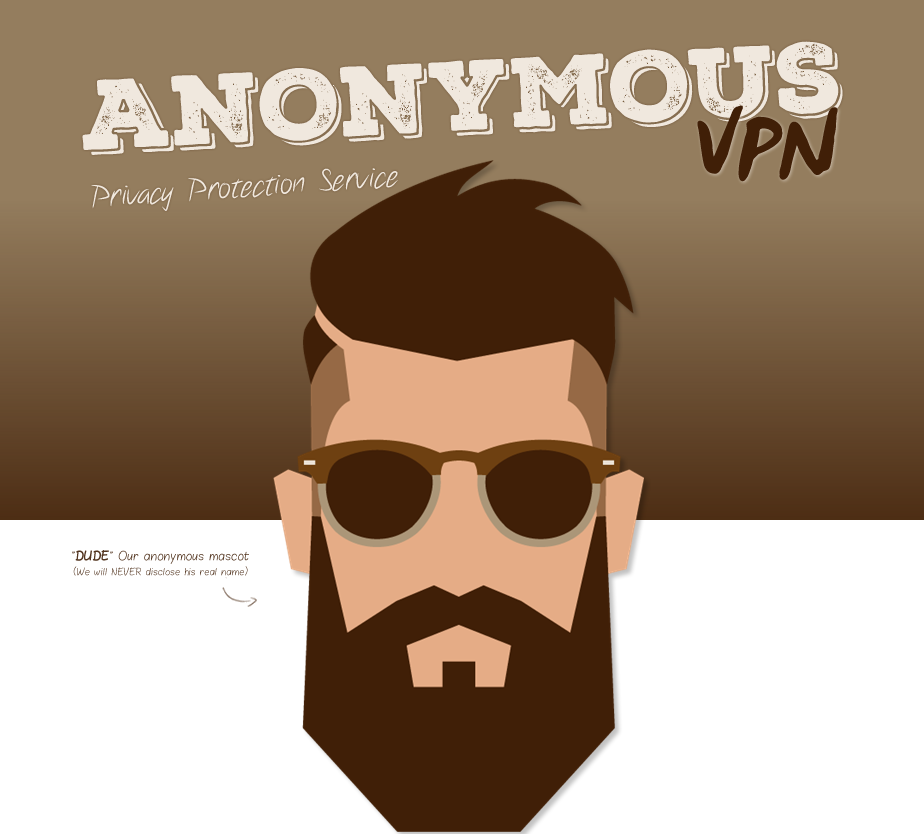 Anonymous VPN is a VPN provider that established itself in 2015 and has improved on its service ever since. Their official anonymous mascot is “the Dude,” the icon of their dedication to complete privacy, both for the customers and the company itself.

Let’s take a look at what they have to offer beyond privacy.

When it comes to torrenting, Anonymous VPN publicly states they support torrents and P2P.

As ever, it’s up to you to ensure what you’re downloading (and uploading) is legal, should your activities be discovered for whatever reason.

If torrenting is important to you, here are some alternative VPNs that support torrenting.

In order to Sign Up to Anonymous VPN, you need to select one of the pricing plans available. Once you complete this step, you will be taken to the “Shopping Cart” page. 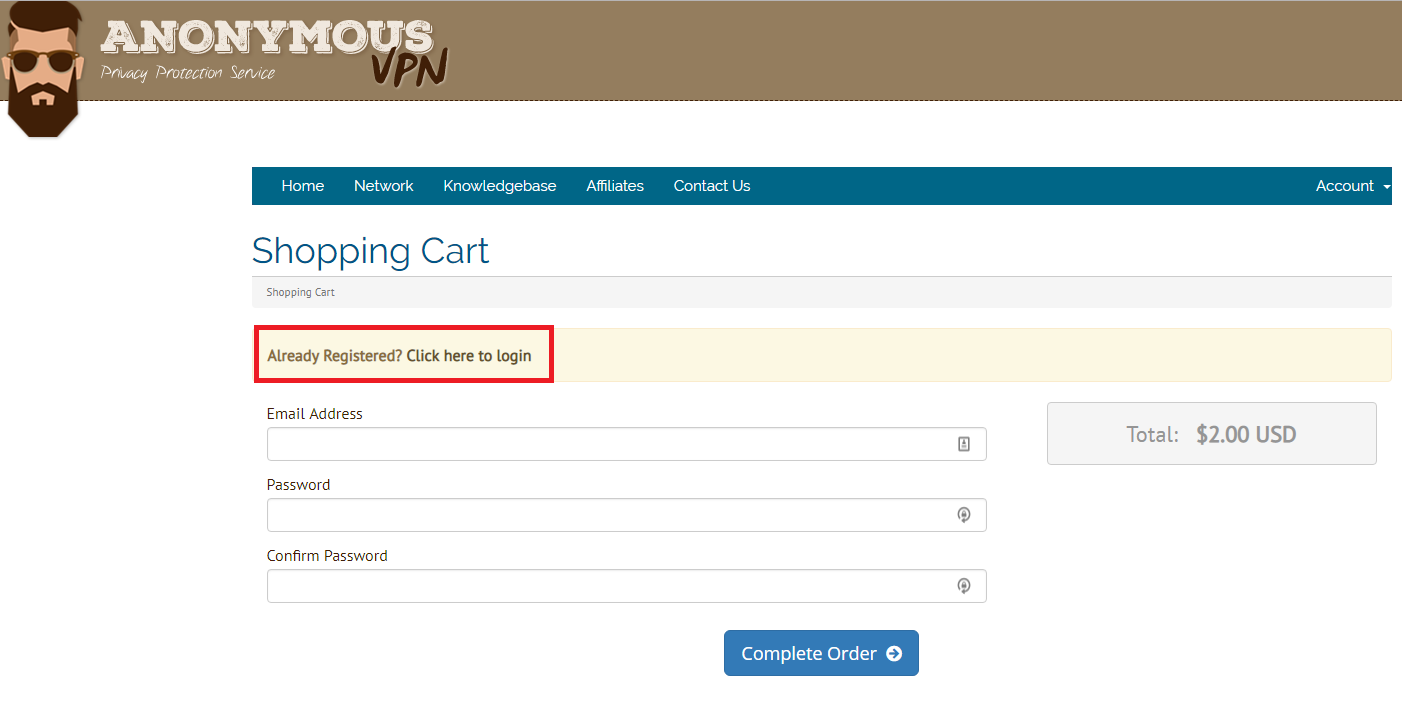 Next, press the button “Checkout.”

The next step is the “Checkout” page on which you’ll provide your card details and subscribe to the service.

The final step is the email confirmation. You will receive two emails; the first one contains your customer area credentials and the second one consists of your login info and links to downloading the software.

Customer Support: Not too shabby

In order to submit an open ticket, you first need to specify your inquiry. There are two particular options: Support and Sales.

Both of them lead to a form you will need to fill out. According to our test, the average response time is half an hour, pretty satisfying for email support. 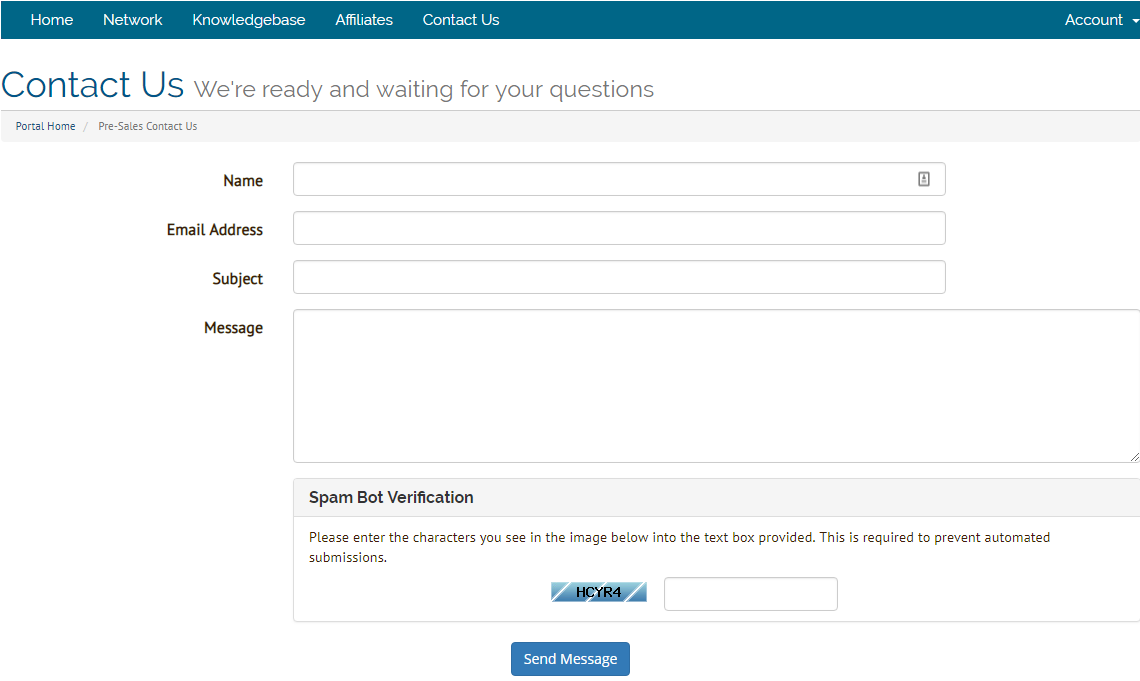 According to customers, the support is available 24/6 instead of 24/7, meaning they do not provide answers on Sunday. We’d have preferred to see a live chat system – but this is sufficient, given its quick response times. While we can’t exactly praise them for this, we can look over it since it’s a small company. For example, Private Internet Access also has active support hours so not having 24/7 support isn’t that big of a deal. 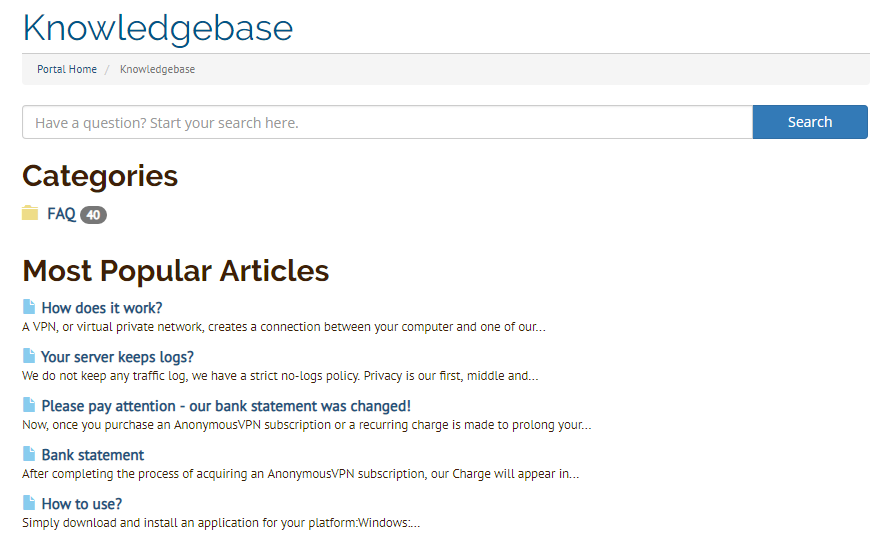 If you want to avoid the ticketing system and the non-instant response time, you can search for your answer in the knowledge base.

Anonymous VPN’s knowledge base is well-supplied. There are two categories in the FAQ Section: Billing and VPN. There are more than 40 answered questions and articles—it’s not much, but it’s there.

You can search for almost any question, starting with logging policy, encryption and ending with the general use of this service.

Anything we looked for, we found an answer to – we’re pretty pleased with the level of help found in the knowledge base.

When it comes to IP and DNS leaks, Anonymous certainly stands up to its name.

According to our tests, Anonymous VPN hid our true location – nice job, Anonymous!

Anonymous VPN does offer a kill switch – fantastic! However, once you install the Anonymous VPN, this feature is switched off by default, so make sure you activate it before you start browsing.

In order to activate the kill switch, you need to open the settings of the app – located in the bottom right.

Device Compatibility: A bit of good, a bit of bad

Customers are able to set up Anonymous VPN on a router. In order to set up your own router, you can visit their website and follow the provided guide in the knowledge base.

Anonymous VPN can be used on 3 countries devices at the same time.

Once you’ve logged into the software, the first thing you can adjust is the region that you’re connecting to. There are 2 possibilities: automatic server selection or choosing a particular server by yourself.

You can change the features to your preference under settings. Here, you can choose a VPN Protocol (OpenVPN or IPSec), whether you want to enable your kill switch, etc.

We won’t comment on the desktop app design since it’s all purely subjective but the aesthetics were not to our liking. The good news is, VPNs tend to run in the background so you’ll only have to look at it once or twice per use. The other good news is they have a modern-ish looking VPN app for Android.

Anonymous VPN has a strict no-logging policy, which means that they don’t store your activity logs. So, in the case of a subpoena, this VPN provider won’t hand over your records for a simple reason – they don’t have them.

However, there is a catch.

Anonymous VPN stores the connection logs. This means they keep the information of which servers you have accessed and how much data you have downloaded through them.

This means that in case of a deeper investigation by law enforcement, you could possibly be exposed.

Servers and Locations: Where are the rest? 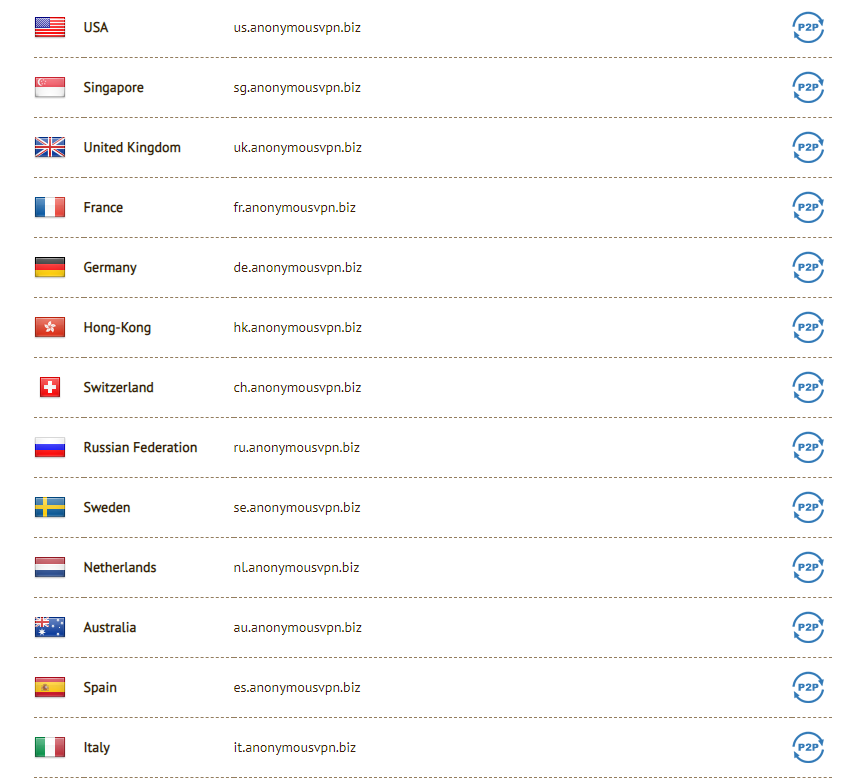 The servers are mostly located in Europe. There are also servers in the US, Australia, and Africa. You won’t find any servers in South America, unfortunately.

Overall? It’s getting better. They used to offer less than 20 countries although they still don’t even cover major regions like South America.

The result from the US Server showed that our speed was reduced by almost 75% from the initial speed.

When it comes to the upload speed, we clocked in at 32.48 Mbps. A significant drop in upload speed as well.

The company points out the users who consume an excessive amount of bandwidth as the main reason for their lack of speeds. Consequently, there are not enough server resources for the rest of the consumers, which results in poor speed quality.

Not to sound too brash Anonymous VPN… but isn’t it your job to provide adequate service to all your users?

Anonymous VPN is one of the providers that do not work with Netflix.

The results of a recent test that included various servers around the globe show that Anonymous VPN doesn’t facilitate Netflix.

Netflix did not work on any of the servers we tested, whether in the USA or Europe.

Fortunately, we’ve made a list of VPNs that do work with Netflix.

The 3 Days Trial is perfect for anyone who likes to test this VPN and see if it is suitable for them. It costs only $2 and is a fair offer you can use before committing to a long-term contract.

Overall, their prices are higher than usual – this fits neatly into our cons, given the lack of quality service we’ve seen in terms of servers and speeds so far.

Let’s do the math. A one-year subscription costs $69 which is $5.75 per month on average. For this price, you can sign up to any of the top VPNs (except for ExpressVPN which is a bit more than $6) and you’ll get way, way more for the money.

Anonymous VPN offers a 14-day money-back guarantee both for the Monthly and Yearly Subscription. Note that you cannot get your money back for the 3 Day Trial.

According to Anonymous VPN’s Refund Policy, there are a couple of conditions you need to fulfill in order to get your money back. Each term is clearly stated on the website, and the only way to get a refund is to contact the team via email.

Payment Methods: Credit card or nothing 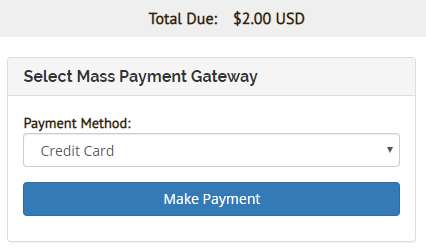 A credit card is the only payment method you can use for purchasing a service from Anonymous VPN. This includes Visa, MasterCard, Discover, and American Express.

So, no cash, gift cards, Bitcoin or Paypal. We’re throwing this section in the con pile too.

Anonymous VPN as a Business

The company has been operating for some years but seems to be inactive on all social platforms. Are they OK?

Anonymous VPN is based in the Republic of Seychelles, Africa.

Now, you may be wondering what has this to do with anything. Well, Seychelles is a privacy-friendly environment which is far, far away from the eyes of spying agencies or nefarious government bodies! We like that in a VPN!

All in all, Anonymous VPN has some value. The app has a nice, easy-to-use interface, with great encryption, a no-logging policy and pretty great features (e.g. kill switch).

It quickly begins to fall short though; slow speeds, a severe lack of servers, 1 payment method, and no Netflix? Eesh, that’s a very hard sell at this price point.

Our recommendation? Look elsewhere. There are better and cheaper options.

Here’s our top 10 pick of the best VPNs.