NordVPN is packed full of features and specialized server types, one of which is known as “Double VPN” that provides you with a doubled level of security by encrypting your traffic twice.

Double VPN isn’t something that many VPN providers offer, however, those that do proudly talk about it openly—and rightly so.

What is Double VPN?

And is it really all that important?

As you may have guessed from the name, double VPN (sometimes called “multihop”) is a feature that sends your traffic through two different VPN servers as it travels from your device to the internet. 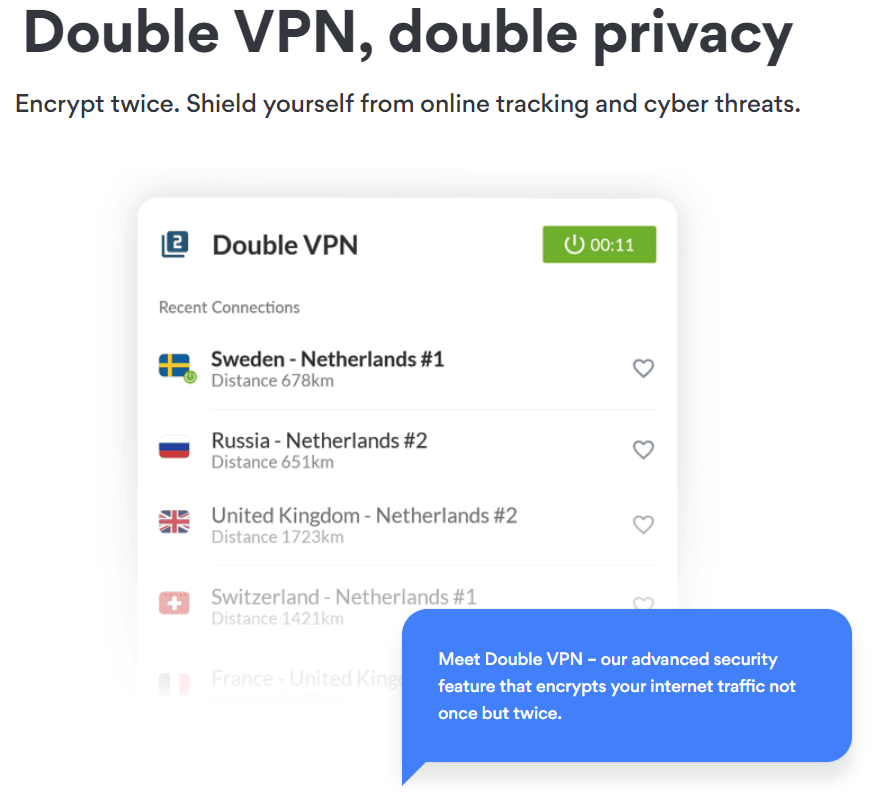 By doing this, NordVPN increases your security and privacy two-fold.

When you opt to connect to NordVPN’s Double VPN servers, all the data you send and receive is encrypted twice during its journey. In addition to this, it will pass through two different servers and thus its original source will be hidden behind two different IP addresses.

Since NordVPN’s double VPN feature sends your traffic through servers located in two different countries, it is nearly impossible to trace the origin of the traffic back to you; the second VPN server never sees your true IP address and has no idea where the traffic has come from initially. As far as trackers are aware, the second server is the original source of the traffic.

With NordVPN, however, this isn’t something you need to worry about since they operate a proven zero-logs policy. Still, it is worth mentioning as it applies to double VPN (or “VPN chaining”) in general.

How to Use NordVPN DoubleVPN

Unsurprisingly, it’s very easy to use.

All you need to do is either:

As you can see, there are plenty of options. The benefit of the second option is that you can manually choose which two NordVPN locations your data is routed through. With the first option, however, you are automatically connected to (what NordVPN considers) the most optimum choice.

From here on in, you are all set.

Until you turn the NordVPN double VPN feature off, all your traffic will travel through two different encryption points. This leaves no way for your data to be compromised. Before you start using NordVPN Double VPN, you should probably weigh the pros and cons, though.

While double VPN is a great feature, it comes at a cost. Before you use it, you may want to weigh up some of the pros and cons.

Pro: When you use double VPN, it makes it virtually impossible for any of your activity to be traced back to you. This level of privacy cannot be achieved in any other way from a single VPN provider.

Pro: You will feel secure. The weight off your shoulders will allow you to breathe for a change.

Con: Whenever you use a VPN, you sacrifice some of your download and upload speeds. Unsurprisingly, when your data goes through two servers, you sacrifice even more.

Con: Double VPN servers can become heavily congested during peak times which has a negative impact on performance.

Who Should Be Using Double VPN?

This is a specialist server type for a specific type of end-user.

If you are simply streaming content online, there is absolutely no need to make use of double VPN. If, however, you are extremely privacy-conscious, are participating in some unscrupulous activity—we won’t ask!—, or are living in a country with heavy internet censorship, then there is clearly a better use case for it.

Additionally, while double the level of encryption sounds great, there’s not really any need to do this.

You should only use NordVPN Double VPN if you are extremely privacy-conscious and want complete anonymity—it is the fact that your IP address is hidden from the second VPN server that provides this, not the double encryption.

If you’re extra paranoid, you can even use NordVPN to make use of Onion Over VPN. It might take a minute to load a simple website, though.

If you want to try this feature out, sign up using the link below.